Did the science behind glass-shattering opera singers lead to a century-old cancer cure?

A viral image on Facebook suggests yes, writing that an American scientist named Royal Raymond Rife "knew that everything vibrates at its own natural frequency." Believing that if "he could discover the frequencies of disease-causing organisms, he could destroy them with the same vibrational frequency." The image goes on to claim that the device he invented — today known as a Rife machine — can cure cancer.

But, the device is not approved by the Food and Drug Administration, and the American Cancer Society, Cancer Research UK, Medical News Today and WebMD have all reported that there is no reliable scientific evidence that the device works as a cure for cancer. 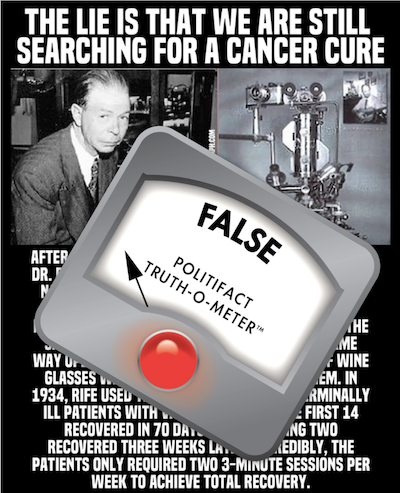 Rife machines, used in alternative medicine clinics today, emit low electromagnetic energy waves, similar to radio waves. The waves are delivered to the body via electrical pads on the hands and feet or through handheld plasma tubes. WebMD reports that these devices are generally safe.

According to a 1994 report from the American Cancer Society titled "Questionable Methods of Cancer Management," Rife based his device on an unsubstantiated medical theory called "radionics."

The theory was promoted by Dr. Albert Abrams who practiced in the late 1800s and early 1900s. He believed that he could build a device that would detect the radio frequencies of diseases and cure people by emitting "disease destroying vibrations" at the same frequencies. He died in 1924, failing to cure himself of pneumonia or either of his wives’ cancer.

But Rife, who believed that cancer was caused by bacteria, created such a device based on the principles of radionics naming it the Rife Frequency Generator. Rife also invented several microscopes and believed he "could visualize the auras of living microbes … (and), use the color of the auras to calculate the electromagnetic frequency of these microbes."

But the science behind it was flawed. "Although sound waves can produce vibrations that will break glass, radio waves cannot destroy bacteria due to their low energy level," wrote the ACS in the 1994 report.

The device regained popularity in the late 1980s and 1990s with the publishing of a book titled, "The Cancer Cure that Worked, 50 Years of Suppression." While Rife clinics still exist, several practitioners have been convicted of fraud and sued for treating cancer patients with or selling devices similar to Rife machines.

Recent research has begun to explore the effect of radio frequencies on cancer cells, but research is in early stages, and uses different frequencies than the Rife machine used.

"There is evidence that application of some radio frequencies can have favorable results. However, the human body, or even a cancer cell, is an extremely complicated system," said Ivan Brezovich, one of the study's researchers and professor emeritus at the Department of Radiation Oncology at the University of Alabama.

"There are countless variables that need to be fully explored, such as what frequency or frequencies should be used, when should they be applied, at what intensity, at what body parts, for what types of cancer, etc."

Brezovich believes that more research must be done and believes that "patients should not forgo a proven method of treatment until a new modality has been verified in a scientific setting."

A miraculous cure for cancer would be wonderful, but there is not currently evidence that Rife machines are that miracle.

Email Interview with Ivan Brezovich, Professor Emeritus at the Department of Radiation Oncology at the University of Alabama, July 29, 2022

Medical News Today, "Rife machine for cancer: Does it work, and are there any risks?" July 2, 2019