Instagram posts
stated on July 10, 2022 in an Instagram post:
"If every person on earth just recycled, stopped using plastic straws, and drove an electric car, 100 corporations would still produce 70% of total global emissions."

If you're on the climate doom side of the internet, you may have seen claims that blame 100 corporations for producing 70% of all the harmful emissions that are driving climate change, otherwise known as greenhouse gas emissions.

"If every person on earth just recycled, stopped using plastic straws, and drove an electric car, 100 corporations would still produce 70% of total global emissions," says a 2021 tweet from self-described socialist @GoodPoliticGuy that was shared on several other accounts. 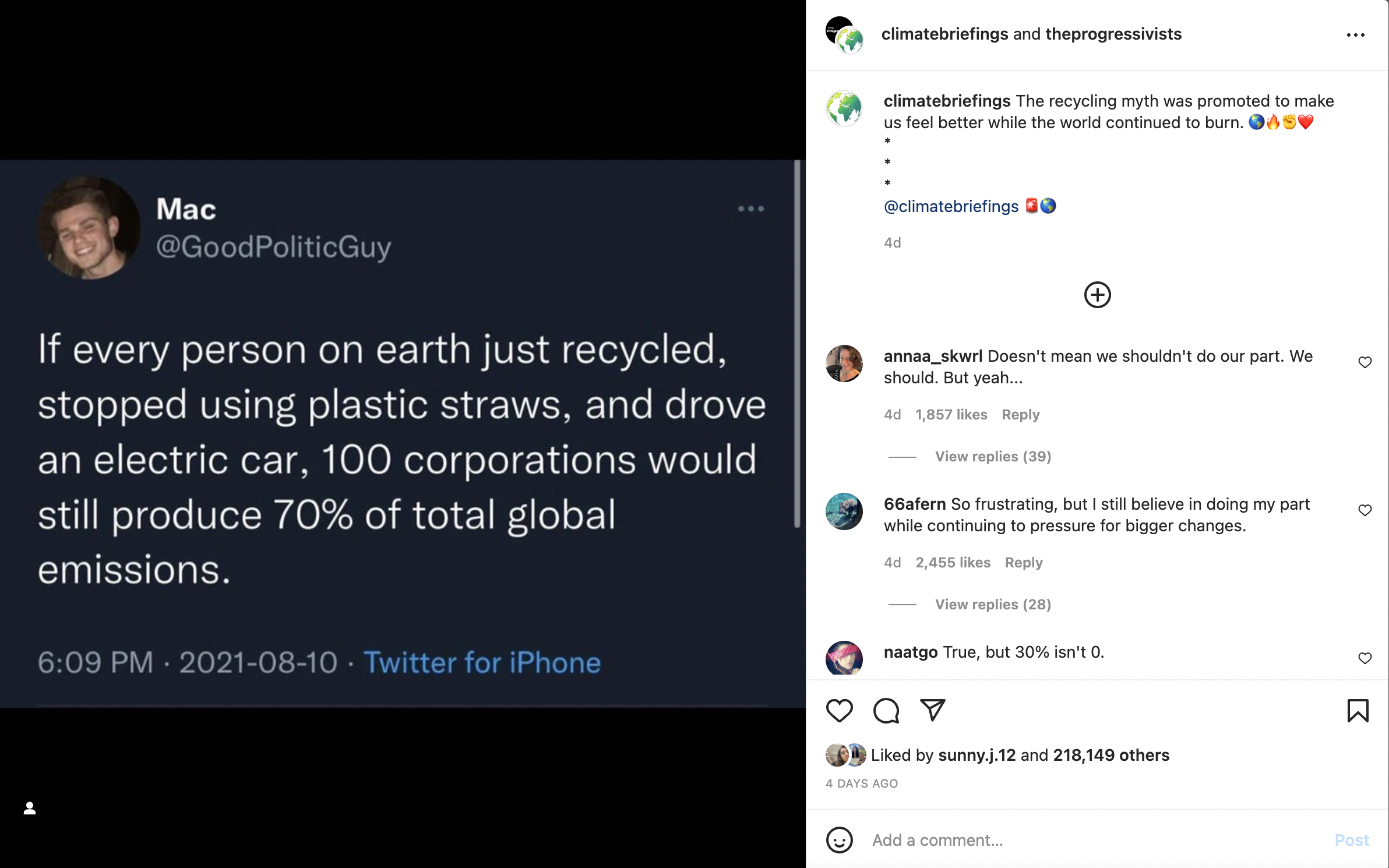 These social media users aren't the first — and they probably won't be the last — to place the majority of the climate change burden on 100 companies.

The claim originates from a widely shared 2017 report from Climate Accountability Institute, a nonprofit advocacy group and the nonprofit charity Carbon Disclosure Project. Headlines from The Guardian, CNBC, Fortune and more claiming 100 companies are responsible for 71% of all emissions quickly followed.

But the report found that 71% of global industrial greenhouse gases can be attributed to 100 companies from 1988 to 2015. Keyword: industrial, which represents a part of total global emissions, but not all of them.

Total global emissions account for the greenhouse gases that are released from food production, burning gasoline, deforestation, oil production and more. The study focused on just the carbon dioxide and methane emissions from fossil fuel and cement production, which still make up a majority of global atmospheric greenhouse gases. It's wrong to suggest that consumers don't factor in global warming. Research shows the human activities driving climate change the most are from heating buildings, electricity use, agriculture, farming and fossil fuel-burning facilities and vehicles.

What the study considered

The original study did not include emissions from land use, land use change or forestry, or from sources such as landfills, agriculture and farming. It also did not include data on indirect emissions, which come from purchased energy such as heating and electricity, citing concerns about double-counting emissions attributable to corporations.

The study relied on data collected by the Carbon Majors Database, which focuses on greenhouse gas emissions data from the largest company-related sources. In other words, The data derives from records of carbon dioxide and methane emissions relating to fossil fuel (oil, gas and coal) and cement producers dating back to 1854.

It’s difficult to discern how much total global emissions can be attributed to the top 100 polluting corporations, but there are ways to get a ballpark idea.

If you use the total global emissions calculated by the Climate Analysis Indicators Tool, an average of around 60% of global emissions can be traced back to those 100 companies from 1990 to 2015. But CAIT's research includes emissions from agriculture, land use and electricity that wasn't considered in the 2017 study.

If you use the total global emissions excluding land use and land-use change and forestry emissions from the Potsdam Institute for Climate Impact Research, then an average of around 63% of those emissions can be traced back to those 100 companies from 1988 to 2015. But Potsdam's research includes nitrous oxide and F-gases — fluorinated gases used in industrial applications — and considered only fossil fuel-related carbon dioxide and methane emissions.

Heede said in an email to PolitiFact that his recent research — not yet published — indicates that the emissions the study considered (carbon dioxide and methane from fossil fuels and cement production) account for 70.4% of total human-made emissions from 1988-2018. That could mean that about half of total global emissions can be traced back to those 100 companies. But the timelines are not equal, and it's not peer-reviewed.

There are many ways to categorize where greenhouse gas emissions come from, such as by country, by economic sector or, in Heede's research, by corporation.

The Intergovernmental Panel on Climate Change is the United Nations body responsible for human-induced climate change data and the internationally trusted source for global emissions statistics. The panel divides total human-made greenhouse gas emissions into different economic sectors, including "industry." That's not to be confused with Heede's definition of "industrial greenhouse gases," which includes all fossil fuel use and cement process emissions.

Additionally, the 71% figure from the study that focused on 1988 to 2015 has become outdated. Heede said recent research from the Global Carbon Project now attributes 69.5% of global fossil fuel and cement emissions from 1751 to 2018 to the top 100 fossil-fuel producers.

So, 100 corporations are not responsible for 71% of total global emissions. The study found that 71% of global fossil fuel and cement emissions can be attributed to 100 companies, and Heede was intentional with careful wording.

Heede also said direct emissions that come from company operations, such as extracting and refining oil, typically account for around 12% of a "carbon major" company's total emissions. The other 88% comes from the consumption of the products.

For example, Chevron, the top emitter of U.S.-tied fossil fuel companies, directly emits harmful greenhouse gases when it explores new areas to drill oil or when it refines that oil into gasoline. But of the approximate 48,267 million tons of carbon dioxide equivalent Chevron emitted from 1965 to 2018, around 42,474 of it (or 88%) is estimated to come from the cars burning gasoline, the airplanes burning fuel, etc.

"I hold the companies accountable for producing and marketing harmful products and for deceptively perpetuating the carbon age for fun and profit," Heede said.

Climate activists have used the study to push for tighter emissions regulations and counter the argument of increased individual responsibility, like cutting out plastic straws or driving electric vehicles.

Heede is doubtful either of the climate activists' calls will be answered. Without regulations forcing corporations to produce less, there is little reason to believe consumers will reduce their consumption enough to dramatically slow climate change.

"It is unlikely that human behavior will change enough to avert serious climate damages," Heede said. "We love our stuff, we love to eat high on the food chain, we keep getting into wars over resources, we like the way we live: big houses, big cars, lots of material goods. Yet only a fraction of U.S. emissions are within our immediate control."

Retrofitting houses to be more energy- and carbon-efficient, driving an electric car and composting waste can help, Heede said, "but industry and commerce and landfills and transportation will still have a large carbon footprint."

Research that accurately compares the total global emissions to the data collected from the 100 most-polluting corporations worldwide does not exist yet.

The study tied emissions from consuming "carbon major" products to the companies that produced those products. So, in theory, everyone driving an electric car would create less demand for gasoline and decrease companies' emissions.

Snopes, Only 100 corporations responsible for most of world’s greenhouse gas emissions?, Sept. 7, 2021

Fortune, These 100 companies are responsible for most of the world’s carbon emissions, July 10, 2017

Facebook posts
stated on December 31, 2017 a video interview:
"ADHD does not exist."

Jim Lamon
stated on June 2, 2022 a statement posted on Twitter:
Blake Masters “unironically quoted a Nazi, called World War II an unjust war, called the Unabomber one of his intellectual influencers, and shared an article attacking Israel as the North Korea of the Middle East.”