Facebook posts
stated on August 3, 2022 in an image on Facebook:
The CDC has classified monkeypox as an airborne form of herpes that can lead to paralysis.

The Biden administration declared monkeypox a public health emergency on Aug. 4, but leading national and international health organizations haven't made sweeping changes to the way they classify the virus and illness, despite alarming claims made by an image circulating online.

An image shared in a Facebook post on Aug. 3 suggested that the Centers for Disease Control and Prevention and the World Health Organization made major changes to their available monkeypox guidance and information.

The screenshot (embedded below) purports to be from a BBC News article and features its logo. A headline reads, "What you need to know about monkeypox," and makes the following claims: 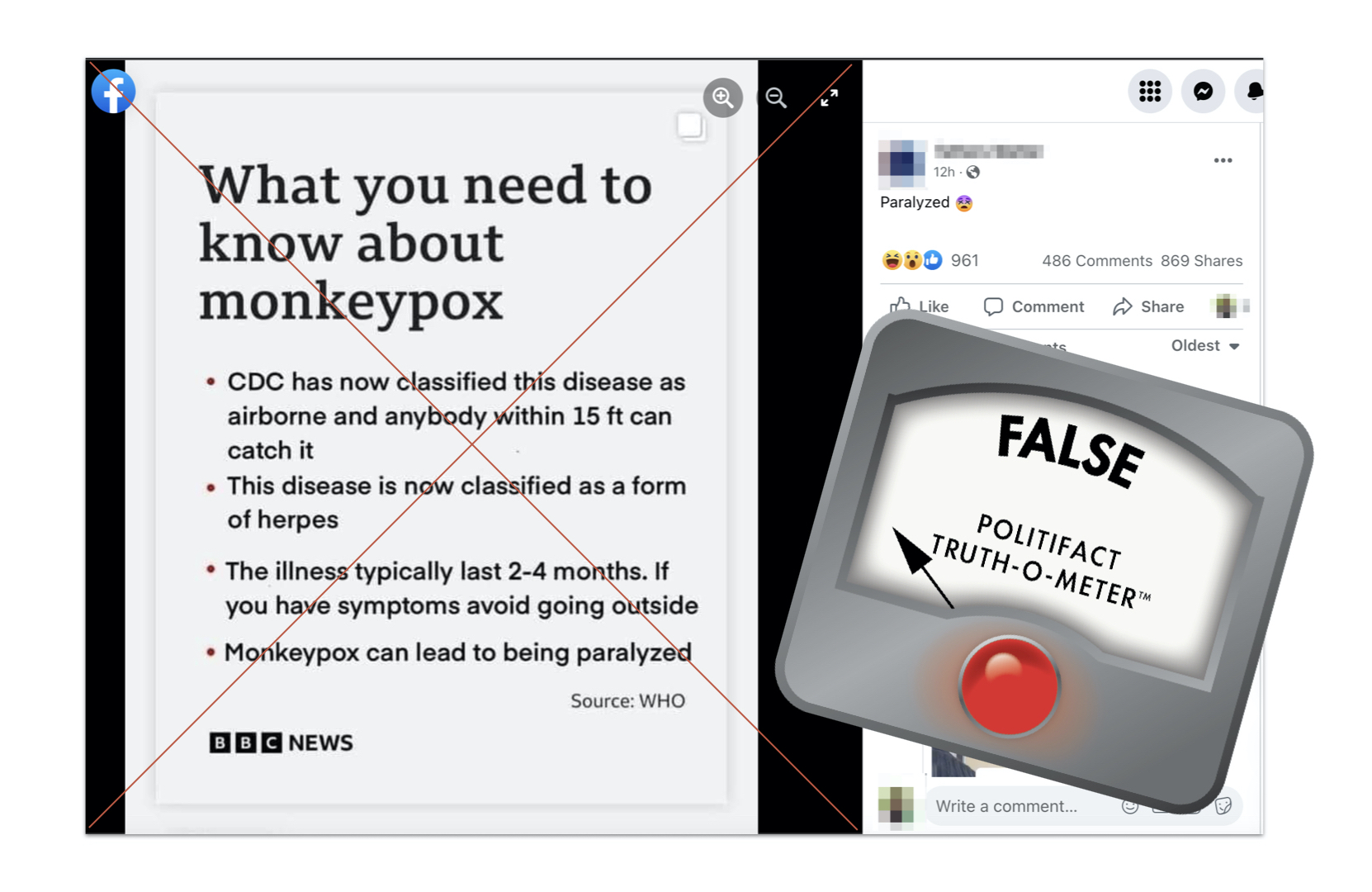 The BBC confirmed the image was not a real graphic and urged people to check the veracity of stories on the BBC News website.

A search for the screenshot’s headline on the BBC News website turned up no matching results. On Aug. 2, BBC News published a story about monkeypox with the headline, "What is monkeypox and how do you catch it?"

The article cites the World Health Organization and the UK Health Security Agency and doesn’t make any of the claims shared in the screenshot.

In addition, reverse image searches for the purported screenshot on Google Image, TinEye, Bing and Yandex returned no matching results. Searches for the exact phrases shared in the image also returned no results, further demonstrating that the image is fake and was not shared by BBC News.

What we know about monkeypox

Amid the current outbreak, some monkeypox questions are still being researched. But available information contradicts the points made in the screenshot.

First, monkeypox does not spread through the air. It is a rare disease caused by infection of the monkeypox virus, according to the CDC.

It spreads from person to person "through close contact with someone who has a monkeypox rash, including through face-to-face, skin-to-skin, mouth-to-mouth or mouth-to-skin contact," the WHO reported. This includes sexual contact.

There’s no evidence the CDC classifies monkeypox as airborne or has said it can spread to people who are 15 feet away from someone who is infected.

"Airborne transmission occurs when small virus particles become suspended in the air and can stay there for periods of time," the CDC said. "These particles can spread on air currents, or sometimes even infect people who enter a room after the infected person has left. In contrast, monkeypox may be found in droplets like saliva or respiratory secretions that drop out of the air quickly."

Airborne transmission of monkeypox has not been reported, the CDC said in June. 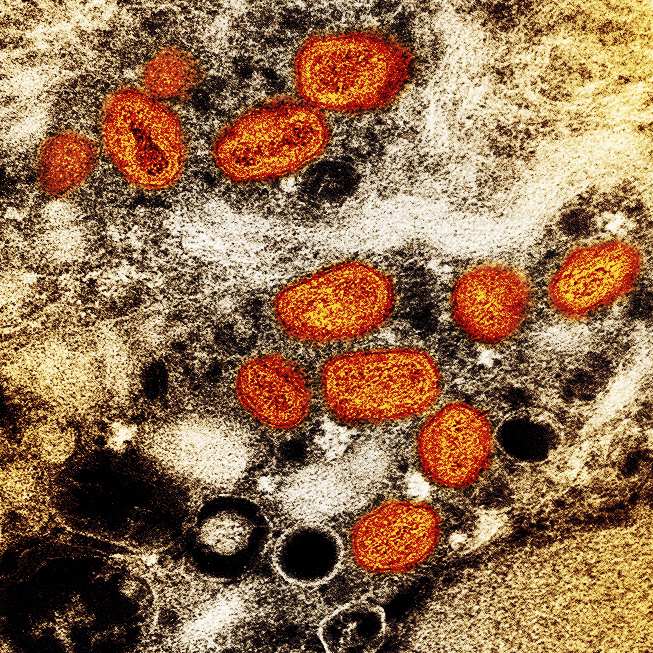 This image provided by the National Institute of Allergy and Infectious Diseases (NIAID) shows a colorized transmission electron micrograph of monkeypox particles (orange) found within an infected cell (brown), cultured in the laboratory. (NIAID via AP)

Second, and contrary to the content in the fake image, monkeypox is not a form of herpes. The disease is caused by the monkeypox virus, which is a member of the Orthopoxvirus genus, the WHO reported. Genital herpes, meanwhile, is a sexually transmitted disease caused by two types of viruses: herpes simplex virus type 1 and herpes simplex virus type 2, according to the CDC. Monkeypox is "not considered a sexually transmitted infection," according to the CDC’s monkeypox FAQ page.

The WHO says that "while close physical contact is a well-known risk factor for transmission, it is unclear at this time if monkeypox can be transmitted specifically through sexual transmission routes. Studies are needed to better understand this risk."

Finally, the WHO does not list paralysis as one of the main complications of severe monkeypox cases.

Some severe cases of infection can lead to medical complications including secondary infections, pneumonia, sepsis, encephalitis, confusion and infection of the cornea, which can cause vision loss, the WHO reported. Historically, between 1% and 10% of people with monkeypox have died.

Monkeypox can also cause encephalitis, or the inflammation of the brain, which can sometimes cause severe symptoms, including seizures, memory problems, personality changes, paralysis and hearing or vision problems, according to Mayo Clinic.

A fake BBC News screenshot claims the CDC has classified monkeypox as an airborne form of herpes that typically lasts two to four months and can lead to paralysis.

The CDC and WHO haven’t changed how they classify monkeypox. The virus does not spread primarily through airborne transmission, is not a form of herpes, does not last two to four months and rarely leads to paralysis. Also, the image posted on Facebook is not a real graphic shared by BBC News.

The Washington Post, "Understanding monkeypox and how outbreaks spread," Aug. 4, 2022

Centers for Disease Control and Prevention, "About Monkeypox," accessed Aug. 4, 2022

Centers for Disease Control and Prevention, "How it spreads - monkeypox," accessed Aug. 4, 2022

Facebook posts
stated on August 3, 2022 an image on Facebook:
The CDC has classified monkeypox as an airborne form of herpes that can lead to paralysis.

Facebook posts
stated on July 24, 2022 a blog post shared on Facebook:
“‘Monkeypox’ is only circulating in countries where the Pfizer vaccine has been distributed and is being used to advance a Technocratic Great Reset."

Facebook posts
stated on July 20, 2022 an image on Facebook:
“The gunman at Greenwood Park Mall was a CIA asset.”