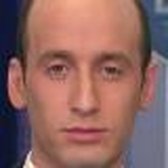 Stephen Miller was a senior adviser to President Donald Trump. Previously, he worked in the Senate office of Alabama Republican Jeff Sessions, who became Trump's attorney general in 2017. In April 2021, he launched America First Legal, saying it would use "our legal system to defend our society and our families from any unlawful actions by the left."