Facebook posts
stated on October 28, 2021 in Facebook posts:
A chart shows China and India are leading in per capita carbon dioxide emissions.

On Facebook, a user sharing the chart asked: "Why are we weakening our economy?" They cited the New York Post as the source. 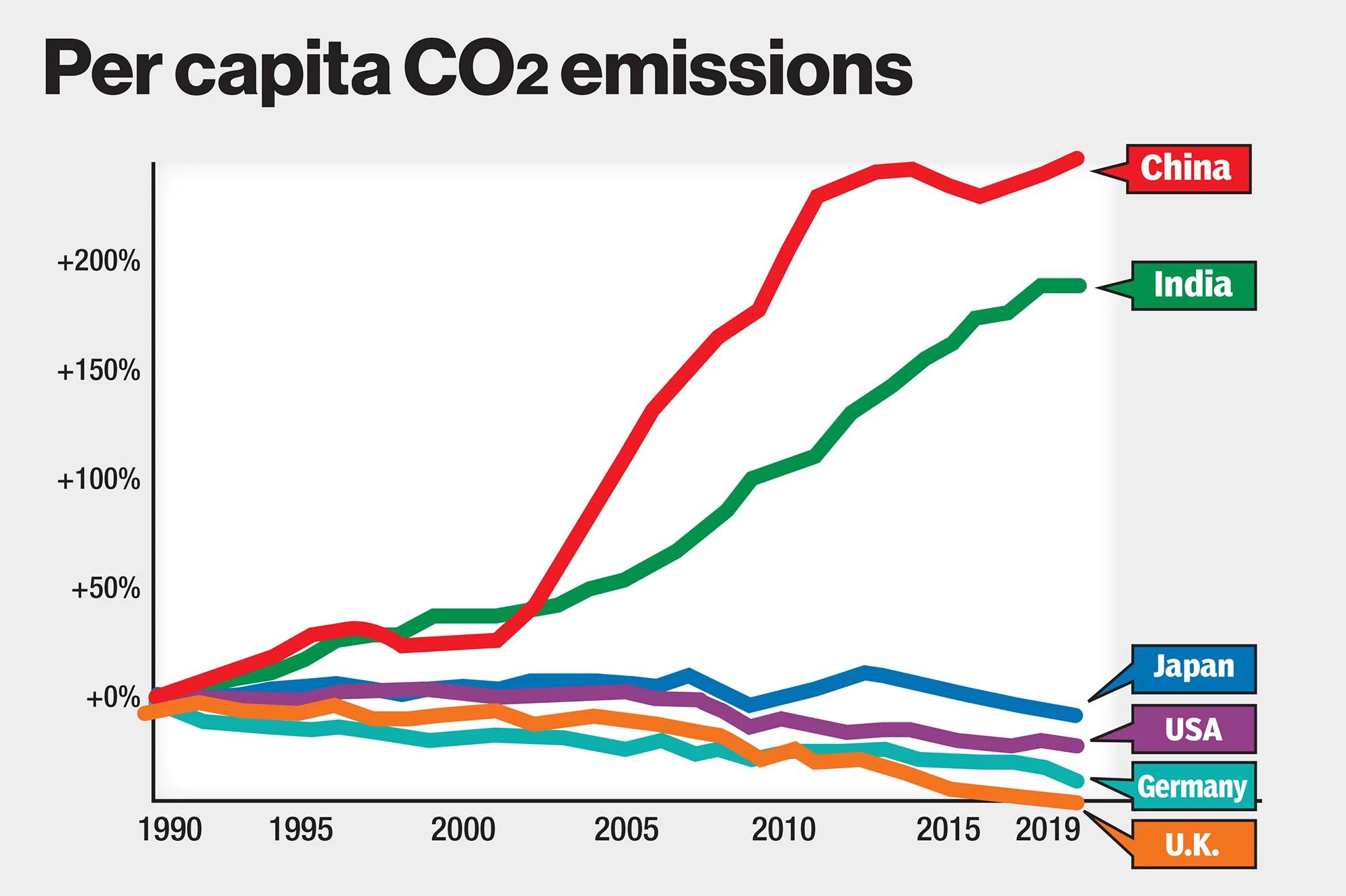 It’s important to know what the chart shows, and what it doesn’t.

It’s important to know what the chart shows, and what it doesn’t.

While the headline on the graphic says "Per capita CO2 emissions," what the lines on the chart show is the percentage change in CO2 emissions from 1990 to 2019 for China, India, Japan, the U.S., Germany and the United Kingdom.

It appeared alongside an Oct. 26 opinion article in the New York Post headlined "Why destroy our economy to cut emissions — when China and India are spewing away?" The piece ran ahead of the international climate change conference of world leaders in Glasgow, Scotland, called COP26.

Ritchie offered a simple explanation: Because China and India had very low levels of per capita emissions in 1990, when their economies were far less developed, their emissions have grown a lot since then. Readers wouldn’t know it from this graphic, but the U.S., U.K., Germany and Japan already had high levels of emissions, which didn’t change very much over the same period.

A different way of looking at the data provides more context.

The difference in charts from Our World in Data depends on whether the "relative change" option was selected. Checking this box shows the percentage change over time and makes it appear as though China and India are leading in CO2 emissions compared with other developed nations.

The Facebook post is missing context because it shows the change in emissions per person, but not the actual emissions.

"There is a direct, linear relationship between the total amount of CO2 released by human activity and the level of warming at the Earth’s surface. Moreover, the timing of a ton of CO2 being emitted has only a limited impact on the amount of warming it will ultimately cause.

"This means CO2 emissions from hundreds of years ago continue to contribute to the heating of the planet — and current warming is determined by the cumulative total of CO2 emissions over time."

A Facebook post shows China and India leading in per capita CO2 emissions compared to the U.S., U.K., Germany and Japan between 1990 and 2019.

The chart is missing some context, and the headline is misleading. When looking at the percentage change in per capita CO2 emissions from 1990-2019, China and India have seen the largest increases. Both countries had relatively low emissions in 1990, and they have grown a lot since then. The U.S., U.K., Germany and Japan already had high levels of emissions in 1990, and they have remained at high levels, with the U.S. leading the pack.

New York Post, "Why destroy our economy to cut emissions — when China and India are spewing away?" Oct. 26, 2021

Facebook posts
stated on January 6, 2022 Facebook posts:
“Dyson is canceling their contract with Walmart and selling off Dyson Supersonic” hair dryers “only for $1!”

Facebook posts
stated on October 28, 2021 a post:
“Scientists say this map represents the US in 30 years if we don’t reverse climate change.”