"Heres your BLM attacking a elderly man wearing oxygen ..and it takes 3 of them..but you will not see this on News outlets..," reads a June 29 Facebook post.

It included this photo: 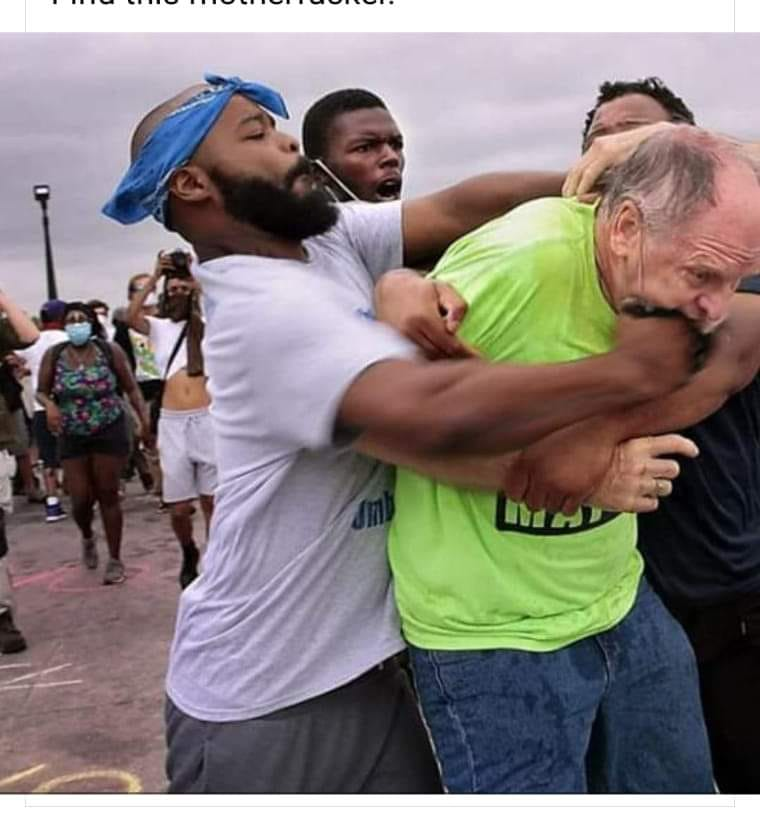 An older man was punched at a St. Louis demonstration where people chanted against racism and carried "Black Lives Matter" signs, though it’s unclear what led to the scuffle.

The older man was wearing a face mask around his neck, according to pictures taken at the scene; he was not "wearing oxygen."

St. Louis Post-Dispatch photographer Robert Cohen, who captured the image, told PolitiFact in an email that he didn’t see oxygen on the man. "No oxygen on him," he said. "No oxygen on anyone at the protest that I noticed." Other images from the protest show clearly the man is wearing a face mask, sometimes pulled down, not oxygen tubes.

The photo shown in the Facebook post comes from the Post-Dispatch, which on June 27 covered what were two clashing demonstrations involving a statue of King Louis IX of France, the city’s namesake, in Forest Park. More than 200 people gathered at the site, some calling for the statue’s removal and others offering public prayers that it remain standing. About a dozen police officers attempted to form a line between the two sides, the newspaper reported.

Though the news article does not specifically describe the incident cited in the Facebook post, it includes several photos from the apparent altercation between the white man and the three Black men. The captions on those photos indicate the following:

Reuters fact-checked another claim related to the photograph and reported that a Reuters photographer at the scene "said there was no indication" the white man was part of the Catholic contingent praying at the base of the statue.

"The man appeared and approached protesters near the conclusion of the gathering as people were dispersing," the article said.

St. Louis police told PolitiFact it received only one report from the demonstrations, involving a 34-year-old white man saying he was slapped several times. The suspect is listed as a 37-year-old Black man.

While not commenting specifically on the incident captured in these photos, the local prosecutor said blows thrown at the protest are under investigation for possible criminal charges, the Post-Dispatch reported.

The Black Lives Matter organization did not reply to our requests for information.

An older white man was in an altercation with a younger Black man at a demonstration in St. Louis that showed support for Black Lives Matter, according to photos and captions recorded by news outlets. There is no evidence the white man was "wearing oxygen."

Reuters, "Fact check: Man shown being attacked in St. Louis was not part of group of praying Catholics," July 2, 2020

Scott Adams
stated on January 23, 2023 an Instagram post:
People not vaccinated against COVID-19 “came out the best."

Occupy Democrats
stated on January 12, 2023 a Facebook post:
"Social Security has nothing to do with the deficit or the national debt."

John Rich
stated on January 5, 2023 a Facebook post:
Cellphone data used to arrest the Idaho quadruple-murder suspect proves that criticism of the “2000 Mules” movie’s use of cell data is unfounded.

Robert Malone
stated on January 3, 2023 a video shared on Instagram:
COVID-19 vaccines "provide zero benefit relative to risk for the young and healthy."

Joe Biden
stated on December 16, 2022 a speech:
Says he has been to “Afghanistan, Iraq and those areas” twice as president.

Bernie Sanders
stated on November 29, 2022 an interview:
In the first three quarters of 2022, “the railroad industry made $21 billion in profits, provided $25 billion in stock buybacks and dividends” and CEOs are paid up to $20 million a year, while railroad workers have "zero guaranteed sick leave."

Herschel Walker
stated on November 16, 2022 an ad:
“(Raphael) Warnock’s camp was shut down for failing to report five findings of child abuse and neglect."

Herschel Walker
stated on November 11, 2022 an interview:
Raphael Warnock "believes in no cash bail" and "letting people out of prison that are going to make us prisoners in our own home."