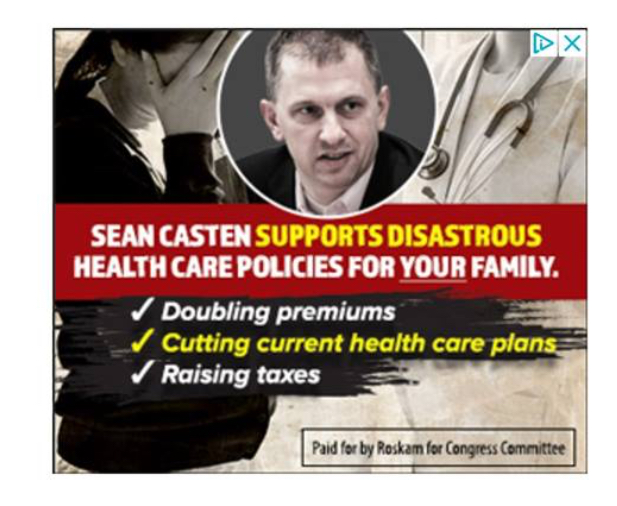 It’s no surprise that Roskam, a six-term Republican incumbent fighting to keep his 6th District seat in the Western suburbs, doesn’t see eye-to-eye on health care with Sean Casten, a clean-energy entrepreneur from Downers Grove.

Roskam was a key architect of last year’s congressional tax overhaul that struck the controversial Obamacare penalty for not having health insurance. Casten has made protecting and expanding health care access under Obamacare, formally known as the Affordable Care Act, a top priority of his campaign.

Republicans have been complaining about the effects of Obamacare for years, but Roskam is taking some wild swings with this attack on Casten. There’s a lot here to unpack, so to keep it simple this fact-check focuses on the ad’s unsubstantiated health care claims.

Veronica Vera, a Roskam campaign spokeswoman, said the ad connected the dots between Casten’s support for Obamacare and a federal report—itself containing a number of caveats—that found premiums sold to individuals on the federal health care exchange were 105 percent higher in 2017 than premiums for existing individual market plans available in 2013 before the exchange opened.

If it happened in the past it surely then will happen in the future, Vera reasoned, and so to the Roskam campaign that means Casten backs a doubling of premiums.

One obvious problem with that line of thinking is that the Roskam campaign could provide no evidence that Casten had ever said such a thing.

What’s more, experts say a major factor behind recent premium spikes on the individual market was uncertainty over the law’s future given frequent attempts by Roskam and other Republicans, including President Donald Trump, to kill or weaken Obamacare.

Even so, there is evidence in Illinois that the days of Obamacare sticker shock may be over. Illinois’ largest insurer, Blue Cross and Blue Shield, has proposed a slight reduction in its premiums for Obamacare plans next year.

It’s also important to note that most Americans obtain insurance through their employers, not Obamacare. Overall, premium hikes for work-based policies have been modest in recent years.

For those who do rely on Obamacare, just a small share have been exposed to the full brunt of past Obamacare premium increases. Of the 15.2 million Americans who in 2017 purchased Obamacare coverage through the federal health care exchange, 8.2 million qualified for federal subsidies that cushioned them from increases, according to the Kaiser Family Foundation, a leading authority on health care.

Another 5.4 million Americans also purchased full-price individual insurance through the off-exchange plans that existed prior to Obamacare, according to Kaiser.

"It's important to think about these people because the ACA was intended to make insurance more affordable," she said. "But putting it into perspective, it's a relatively small share of the population."

Roskam’s other health care attack on Casten is also convoluted.

The logic works this way: Obamacare shoppers had fewer options when picking plans for 2018, so that must mean that if Obamacare were expanded as Casten wants the options would narrow even further.

That argument is riddled with holes. Obamacare plans didn’t exist prior to 2014, so any number of options offered on the exchange are a plus, even if pared back. A key reason for the reductions was uncertainty over the law’s future following the election of Trump, who demanded it be scrapped.

And Obamacare also mandates minimum levels of coverage that did not exist prior to implementation of the health care law, which vastly expanded access to coverage for millions of Americans who previously had none, including those who didn’t qualify based on their health.

"Before the ACA, if you had a pre-existing condition, there could be any number of plans to choose from, but you couldn’t get any of them," said Cox, the insurance expert with the Kaiser Foundation.

Casten doesn’t support doubling premiums or reducing options—and Roskam’s campaign could point to nothing that said he did.

The crux of Roskam’s argument centers on Casten’s support for expanding Obamacare options. Premiums on the federal exchange have spiked in past years, but Illinois’ largest insurer now says it expects them to go down slightly for 2019.

What’s more, most Americans get insurance through employers, not Obamacare. But among those who do, most have been insulated from the full force of premium increases by federal subsidies.

Health care policy has more wrinkles than a Shar Pei dog, and the complexity makes it easy for partisans to demagogue. Roskam’s claims are a clear example.

They’re not just wrong, they’re absurd. We rate them Pants on Fire!

"Blue Cross and Blue Shield wants to lower premiums on some Obamacare plans it sells in Illinois," Chicago Tribune, Aug. 2, 2018

Phone interview: Cynthia Cox, Director for the Program for the Study of Health Reform and Private Insurance at the Kaiser Family Foundation, Aug. 8, 2018

"Illinois Obamacare sign-ups down, but so were costs for many," Chicago Tribune, April 4, 2018

Mary Miller
stated on October 23, 2021 a tweet:
The migrant caravan from Tapachula, Mexico “is the population of Minneapolis.”

Terri Bryant
stated on September 21, 2021 a radio interview:
“75% of Republicans have been vaccinated” against COVID-19 in Illinois.

Sean Casten
stated on August 23, 2021 remarks at a press conference:
Says the 1995 Chicago heat wave was “the largest single-day, non-war fatality in the United States” prior to 9/11, and “we are now expecting temperatures that hot in Chicago every summer.”

Rodney Davis
stated on July 27, 2021 remarks at a press conference:
House Speaker Nancy Pelosi’s “office was calling the shots on all of their (Capitol security officials’) actions on Jan. 6.”

Lori Lightfoot
stated on June 28, 2021 remarks at a press conference:
Cook County’s criminal courts “have been shut down for 15 months.”

JB Pritzker
stated on June 3, 2021 a TV interview:
Illinois Republican lawmakers “have argued that they want an independent [redistricting] commission, but they didn't do anything about it.”

Robert Martwick
stated on May 10, 2021 a podcast interview:
Opposition to having a fully elected Chicago Board of Education is in the “super minority.”

Richard Durbin
stated on April 13, 2021 a TV interview:
“We have 23% of all the lead pipe leads in America in the Chicagoland area.”

Mike Bost
stated on March 15, 2021 a radio interview:
The American Rescue Plan Act “does not” include “checks and balances” on how funds for state and local governments can be spent.

JB Pritzker
stated on February 17, 2021 a speech:
“For the month of February, Illinois has been the vaccination leader among the 10 most populous states in the country.”

Illinois Republican Party
stated on February 5, 2021 social media posts:
“Pritzker’s Hierarchy of Vaccine Priorities” puts prisoners, politicians and college students ahead of “individuals with high-risk health factors, and everyone else.”

JB Pritzker
stated on November 17, 2020 remarks at a news conference:
“Republican elected officials, a network of propaganda publications in the state and some radio shock jocks” were spreading “a lie” about his daughter breaking COVID-19 restrictions.