Florida Democratic Party
stated on April 27, 2017 in a press release:
Donald Trump’s "golf course on the island defaulted, like so many of his other failed business schemes. The failure left Puerto Rican taxpayers with a nearly $33 million bill."

President Donald Trump accused Democrats of using Puerto Rico’s debt as a bargaining chip before the deadline to settle the federal budget.

"The Democrats want to shut government if we don't bail out Puerto Rico and give billions to their insurance companies for OCare failure. NO!" Trump tweeted April 27.

The Democrats want to shut government if we don't bail out Puerto Rico and give billions to their insurance companies for OCare failure. NO!

Trump appeared to be referring to an effort by Democrats including Florida Sen. Bill Nelson to address a Medicaid shortfall in Puerto Rico, which became the largest municipal bankruptcy May 3.

The Florida Democratic Party fired back at Trump’s tweet in a press release suggesting that Trump shares blame in the island’s economic downfall. A Trump golf resort, the party said, crashed in Puerto Rico and hurt taxpayers.

"Trump conveniently left out the fact that his golf course on the island defaulted, like so many of his other failed business schemes. The failure left Puerto Rican taxpayers with a nearly $33 million bill, another example of Trump's many scams that make him wealthier and con hardworking families," the party wrote.

Did Trump really leave the island with a bungled investment?

We found that the bankruptcy of the golf resort did leave taxpayers with a bill, and that Trump had pledged to turn things around.

But the Democrats portrayed the situation in a misleading light by omitting that the business was in dire financial straits years before Trump entered the picture. The Trump family has tried to create space in the years since between the resort and their business.

The resort in Rio Grande opened as Coco Beach Golf & Country Club in 2004 and ultimately included two 18-hole golf courses and a clubhouse. Trump entered the picture in 2008. 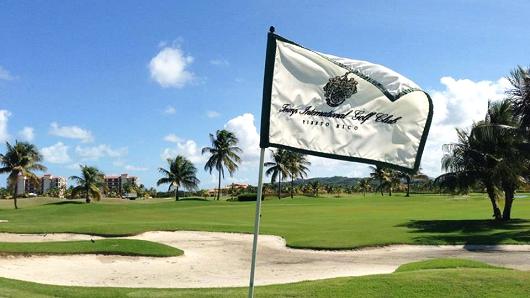 The fund issued about $25 million in bonds in 2000 and 2004, according to a 2016 BuzzFeed article that included documents about the golf resort’s bankruptcy.

The tourism development fund is paid for by tax dollars. If a private entity defaults on its obligations -- as the golf resort did in this case -- the fund has to make good on the principal and interest.

The resort suffered amid the recession that hit Puerto Rico a few years before Trump got involved.

To learn more about what went wrong, we interviewed Craig McCann, a principal at Securities Litigation and Consulting Group, who has testified several times in arbitrations about Puerto Rican municipal bonds but has had no role in this particular case.

McCann was a key source for the BuzzFeed article, and his firm reviewed annual financial reports that were included.

The recession in Puerto Rico was much worse than the mainland and started earlier as manufacturers left in 2006-07 due to the elimination of a tax subsidy for manufacturers, McCann told PolitiFact.

Then the island got a second financial hit, this time rattled by the recession in the United States. The resort lost about $5.7 million in 2007 and $6.3 million in 2008.

"This resort just got hammered and is hemorrhaging money before the Trump Organization’s involvement," McCann told PolitiFact.

As the losses piled up, property owners went looking for help.

Viral image
stated on September 28, 2022 in an Instagram post
A news anchor warned that if Hurricane Ian “moves 20 miles to the west … you and everyone you know are dead.”

In 2008, Trump signed two deals: a licensing agreement to rename the club as Trump International Golf Club Puerto Rico, and a management agreement to position Trump to handle the club’s operations in exchange for a share of its annual revenue and a slice of the profit. A document stated that as manager, Trump International Co had developed a plan to maintain positive operating cash flow.

"Puerto Rico is a fantastic place and deserves the best, which is what we will deliver," Trump said at a 2008 news conference on the island, according to the Washington Post. "Every detail will be important to me."

It isn’t clear from the documents how involved Trump really was. It is clear, however, that he didn’t solve the resort’s problems.

There was at least one bright spot as the resort racked up losses: The course landed on the PGA tour in 2008.

But in 2011, the resort sought more bonds to repay the earlier bonds.

McCann said that even if Trump had not gotten involved, the resort was headed toward bankruptcy because the 2000 and 2004 bonds were about to default.

In 2015, the resort filed for bankruptcy under its original name, the Coco Beach Golf and Country Club. The resort claimed it owed more than $78 million but only had $9 million in assets.

Johanna Cervone, spokeswoman for the Democrats, says Trump was brought in to save the golf course but left taxpayers on the hook.

"He was tasked with turning it around, he made revenue off of it, and it failed," she said.

"We have zero financial investment in this course," Eric Trump told Bloomberg News in July 2015. "This has absolutely nothing to do with Trump. This is a separate owner. We purely manage the golf course."

(Eric Trump filed a bankruptcy claim for about $927,000 for unpaid fees on behalf of Trump Golf Coco Beach LLC.)

Bankruptcy court records show that the Puerto Rico Tourism Development Fund, the largest creditor, filed a claim for $32.67 million for the real estate mortgage in 2015.

The resort later sold for about $2 million to OHorizons Global, a private investment firm. This left the Government Development Bank -- the tourism fund is a subsidiary of the bank -- to make payments on the outstanding bonds.

We sent a summary of the golf course’s financial problems to a few experts and asked if Trump should be blamed for the bankruptcy. (These experts on bankruptcy or corporate law received our summary with links to news reports but didn’t pore over financial records for days, as McCann’s firm did.)

John A. E. Pottow, a University of Michigan law professor and bankruptcy expert, said Trump bears some blame for the failure of the golf course because he failed to turn it around. But he said it is debatable if management is to blame for bankruptcy because the context of the recession is a factor.

"I don't know if I like to ‘blame’ anyone for bankruptcy, but to the extent you want to blame people, sure, blame the president (or his company)," Pottow said.

Miami attorney Milton Vescovacci, of Gray Robinson law firm, says the only way to blame Trump for the bankruptcy would be if his involvement was so costly to the operation that it caused the business to fail, and that didn’t appear to be the case here. (Vescovacci is an expert on banking and finance and is currently working with an organization to lobby the U.S. government to allow Puerto Rico to restructure its debt)

With the casinos, Trump was a major investor and had a significant role such as controlling shareholder or as an executive. In Puerto Rico, he said, "The Trump Organization was providing services and a brand all for a fee. No equity interest. No deep involvement."

The Florida Democratic Party said that Trump’s "golf course on the island defaulted, like so many of his other failed business schemes. The failure left Puerto Rican taxpayers with a nearly $33 million bill."

Trump entered into a licensing and management agreement in 2008 -- after the golf course resort had fallen into debt.

Trump failed to turn around the resort and it declared bankruptcy in 2015. The Puerto Rico Tourism Development Fund, which provided project financing in 2000 and 2004, filed a claim in bankruptcy court for $32.7 million. The fund is paid for with tax dollars.

The Democratic Party is correct that taxpayers are left with a nearly $33 million bill, but it exaggerates when it points the finger exclusively at Trump, omitting important details about the recession’s impact on the resort and its financial woes years before Trump’s involvement.

Politifact Rating:
Half True
Donald Trump’s "golf course on the island defaulted, like so many of his other failed business schemes. The failure left Puerto Rican taxpayers with a nearly $33 million bill."
Florida Democratic Party
political party

Washington Post, "How Donald Trump cashes in even when his name-brand properties fail," July 23, 2015

Interview, Craig McCann, a principal at Securities Litigation and Consulting Group, May 3, 2017

Interview, Harlan Platt, a professor and bankruptcy expert at Northeastern University, May 3, 2017