Bike Austin
stated on June 8, 2016 in a press release:
"Bike lanes and sidewalks have been proven to reduce crashes by up to 38 percent on Austin’s streets."

Do bike lanes and sidewalks drive down accidents up to 38 percent? (Photo by W. Gardner Selby)

After a 14-year-old bicyclist was hit by a car and killed in Austin in June 2016, local nonprofit Bike Austin called on the city to make streets safer for bicyclists and pedestrians.

In a statement, the group’s executive director, Mercedes Feris, said: "Bike lanes and sidewalks have been proven to reduce crashes by up to 38 percent on Austin’s streets."

Does that hold up?

To our inquiry, Feris cited a 2015 City of Austin report, "Redesigning the Street: A Report on Right-Sizing Projects in Austin, TX 1999-2014," analyzing the effects of a certain kind of project, called a road diet, designed to make streets safer by shrinking opportunities to drive too fast.

In what the Federal Highway Administration calls the classic example of a road diet, lane lines on a four-lane road that has two lanes in each direction are repainted to create a three-lane road, leaving a single lane in each direction and a center lane solely for left turns.

A 2014 agency guide to road diets says the concept developed decades ago in response to the expansion-minded road construction of the 1950s and 1960s, when two-lane roads were frequently upgraded to four lanes. One of the first road diets, the guide says, was applied in 1979 to a four-lane road in Billings, Montana. On that road, where about 10,000 cars drove every day, the shrinkage to three lanes was found to reduce crashes without increasing delays.

We dug into Austin’s more recent report and checked with experts on road diets and bicycle transportation. From that, we found that such projects often incorporate new bike lanes -- but they don’t typically add sidewalks. Generally, too, the highway administration has found that crashes in which a car hits a pedestrian walking on the side of the road consistently fall by more than 50 percent when sidewalks are installed. We failed to identify research tying the addition of simple, striped bike lanes to specific percentage reductions in crashes.

The cited city report covers 37 local road diets completed from 1999 through 2014, including the one that Feris pointed out, on a 1.6-mile stretch of Manor Road in Northeast Austin. It resulted, the report says, in a 38 percent drop in crashes.

A city spokeswoman, Marissa Monroy, responded to our inquiry about the research, saying by email the 38 percent reduction in any kind of crash ties to nearly six years of data collected by the Austin Police Department before and after the road diet took place on the stretch of Manor Road between Theo Drive and East 51st Street in November 2010. 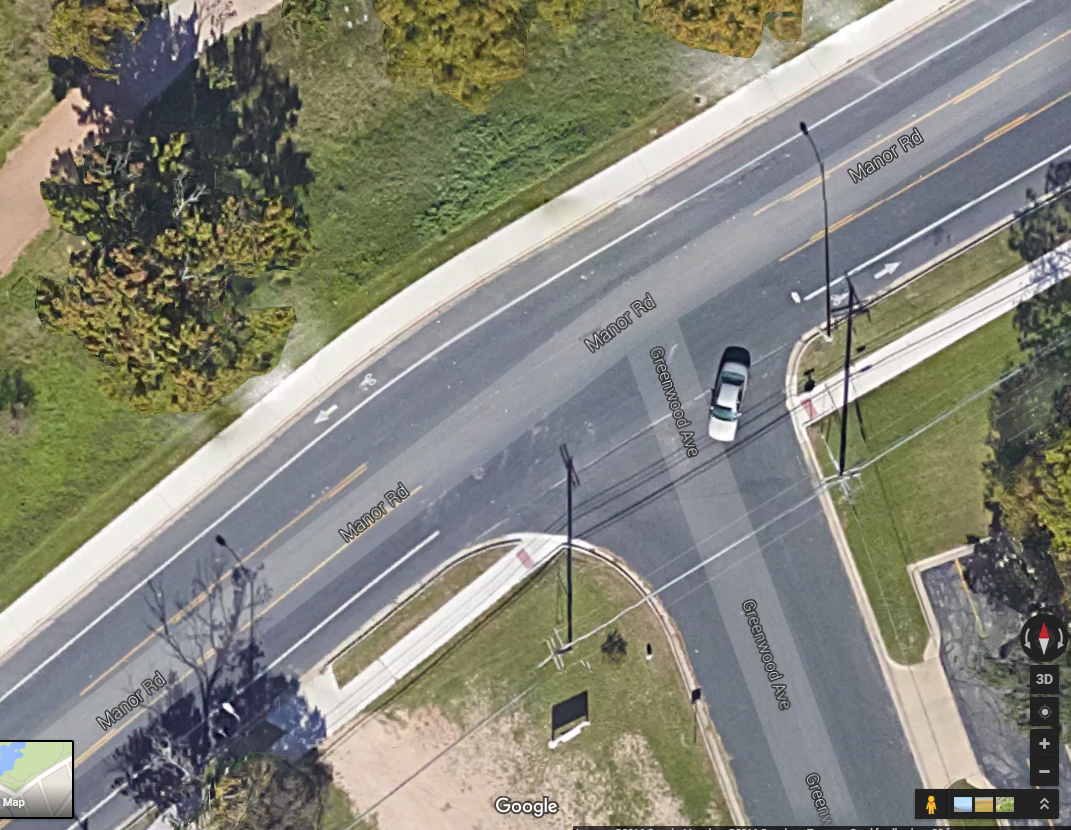 A close-up aerial view from along the noted 1.6-mile segment of Manor Road after the road diet was completed. The road includes bike lanes and the hallmark of a road diet project: a center two-way left-turn lane.

Monroy told us that in the three years before the project, from November 2007 through October 2010, the to-be-reconfigured section had 39 crashes involving any combination of motor vehicles, bicycles and pedestrians--adding up to one pedestrian death and 16 injury crashes involving motor vehicles. In the three years after the project, from December 2010 through November 2013, she said, the stretch had 24 crashes -- or 38.5 percent fewer -- with no fatalities and 14 injury crashes, one involving a pedestrian, two affecting bicyclists.

It’s also worth mentioning, as the city report says, that bike traffic on the segment increased 180 percent, from 54 bikes tallied in a 24-hour period before the project (and its bike lanes) was completed with 151 bikes in a similar period after.

The full report presents general crash-reduction analyses for five of the 37 projects. Among the five, it sums up, "right-sizing projects," or road diets, contributed to at least 22 percent fewer crashes, on Amherst Drive, up to the nearly 39 percent reduction on the Manor Road stretch. We calculated the average of the five: 28.8 percent fewer crashes.

For outside perspective, we reached out to the Texas A&M Transportation Institute, hearing back about road diets, bike lanes and sidewalks from Joan Hudson, an associate research engineer.

Hudson advised that the noted 38 percent reduction in crashes falls in line with national research she’s reviewed, also pointing us to the highway administration and the National Cooperative Highway Research Program -- a division of the Transportation Research Board, which is part of the National Academies of Science, Engineering and Medicine. Each agency highlights the same two studies finding "the road-diet treatment had a significant effect" in reducing crashes, as the cooperative research program said in a 2008 report. The reductions ranged from 19 to 47 percent, with an average of 29 percent.

Hudson confirmed that most road diets include bike lanes, but said sidewalks -- posing greater costs than what it takes to revise lane lines -- are hardly ever included. (It looks to us like a sidewalk may have been installed on the Manor Road stretch. To our query, Monroy said she couldn’t confirm it was part of the related road-diet project.)

And by phone, Hudson told us that determining how much road diets reduce crashes involving bicyclists or pedestrians is hard because there’s not much data measuring bicycle and pedestrian traffic before and after roads are relined. It may be, for instance, she said, that bike accidents escalate after a project is completed largely because more bicyclists use the added bike lanes. That looks to us like what happened on the on the Manor Road stretch, where bike traffic more than doubled with bike crashes only slightly going up.

To our inquiry, a University of Wisconsin urban planning professor, Robert Schneider, said by email that "it is difficult to make a specific statement" about how a particular bike lane reduces crashes, because that’s not what researches examine. Schneider, who teaches about pedestrian and bike safety, said research tends to be broader, looking at what experts call "networks" -- routes through whole cities or significant parts of cities -- to determine how easy and safe it is to get around on a bike.

Research examining those networks, Schneider said, shows that bike-friendly cities help drivers, bicyclists and pedestrians stay safe. He cited a 2011 study from two engineers at the University of Colorado-Denver finding that when intersections and roads are easier for cyclists to navigate and more cyclists hit the road, drivers tend to slow down and be more aware of their surroundings.

A Bike Austin leader, Miller Nuttle, informed of our findings, said its claim wasn’t worded as precisely as it should have been.

Bike Austin said: "Bike lanes and sidewalks have been proven to reduce crashes by up to 38 percent on Austin’s streets."

Research suggests big drops in pedestrian-vehicle accidents when sidewalks are introduced. But Bike Austin didn’t offer nor did we find research showing the addition of bike lanes in themselves or bike lanes plus sidewalks resulted in any percentage plummet in crashes. Instead, the city analysis states that reconfiguring lanes on part of one road, which also gained bike lanes, preceded 38 percent fewer crashes--with crash reductions averaging 29 percent among five road-diet projects.

MOSTLY FALSE – The statement contains an element of truth but ignores critical facts that would give a different impression. Click here for more on the six PolitiFact ratings and how we select facts to check.

Report, "Redesigning the Street: A Report on Right-Sizing Projects in Austin, TX 1999-2014," Austin Transportation Department, May 2015

Report, "Evidence on Why Bike Friendly Cities are Safer for All Road Users," Journal of Environmental Practice, March 2011

Bike Austin
stated on June 8, 2016 a press release:
"Bike lanes and sidewalks have been proven to reduce crashes by up to 38 percent on Austin’s streets."