Conservative pundit Ann Coulter thinks talk of removing the Confederate flag from Southern statehouses, including South Carolina, is nonsense. To Coulter, that makes Republicans who support the movement nonsensical.

Coulter, however, spouted her own bit of nonsense in trying to defend her position.

On the Fox Business show Kennedy June 23, Coulter was asked about the ongoing flag debate.

"Where are you from?" host Kennedy (the former MTV veejay) asked Coulter. Coulter said she’s from Connecticut.

"Do you have a geographic ... Do you have a horse in this race either way? Do you consider yourself a Northerner?"

"Oh, you mean the Southern thing?" Coulter responded. "Well, I'm a student of American history ... I’d really like to like Nikki Haley, since she is a Republican. On the other hand, she is an immigrant and does not understand America's history."

Coulter got one part of Haley’s background right. Yep, she’s a Republican.

But she’s not an immigrant.

She was born in South Carolina.

"Born in Bamberg, the daughter of Indian immigrants, Gov. Haley’s first job was keeping the books for her family’s clothing store -- at the age of 13," reads the website of the South Carolina office of the governor. Bamberg, S.C., is a small city with a population of less than 4,000 people. You may not have heard of it. But it is definitely in the United States.

Louise Lucas
stated on January 18, 2023 in a tweet.
Glenn Youngkin is “the first sitting Governor in the modern era to have their party have less legislative seats than when they were elected.”

The New York Times described Haley’s time growing up in Bamberg in a 2010 profile and her life as the American-born child of an Indian Sikh family. When Haley was about 5, she was disqualified from the Little Miss Bamberg pageant along with her sister because "the judges of the contest, one that crowned one black queen and one white queen, were … flummoxed" by the sisters.

Haley went on to receive an accounting degree from Clemson University, and then returned to Bamberg to work in her family’s store again. With her help, the store turned "into a multimillion-dollar business."

Then, in 2003, a speech by Hillary Clinton inspired Haley to run for state Legislature. "She said there will be all of these reasons that people tell you you can’t do it. She said that there’s only one reason for you to do it, and it’s because you know it’s the right thing. I walked out of there thinking, I’ve got to do this," Haley said to Vogue.

The next year, Haley was elected to represent Lexington County in South Carolina’s House of Representatives.

She visited India as part of a trade mission in 2014. Prior to that, Haley said the last time she visited the country was when she was two years old.

PunditFact reached out to the publisher of Coulter’s latest book Adios, America but did not hear back. Coulter, for the record, describes herself as being of Scottish descent and traces part of her family's roots to "Puritan nonconformists who came to America in 1633." She seemed to defend her remarks in a post of Twitter. 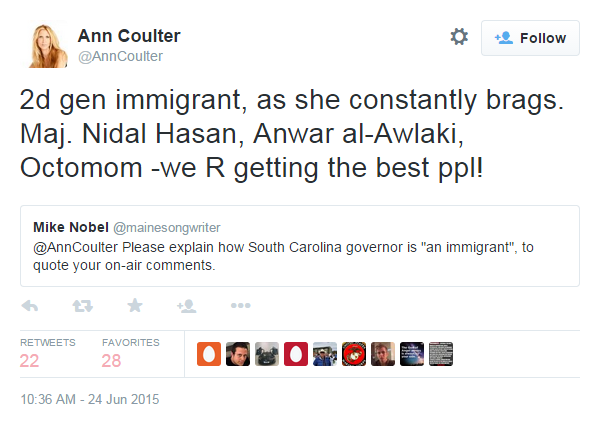 Coulter said Haley is an immigrant and went on to suggest that Haley doesn't understand American history because she is less-American than others (namely, Coulter).

Haley was born in South Carolina, and is no more an immigrant than Coulter, who describes herself of Scottish descent. We rate Coulter’s claim Pants on Fire.

Bruce Rauner
stated on March 15, 2017 In a tweet :
"Our families have the highest property taxes in the country. We must change this."

Rahm Emanuel
stated on November 15, 2016 Interview with Bill Kurtis :
[Chicago is the] only city in the United States, you get a B average in high school, community college is free.

Brad Schneider
stated on September 16, 2016 a campaign tweet:
Says Republican U.S. Rep. Bob Dold "continues to side with his Republican leadership and the NRA in blocking consideration of a bill that would keep firearms out of the hands of people on the terrorist watch list."

Donald Trump
stated on November 10, 2015 a debate in Milwaukee, Wis.:
"We’re losing now over $500 billion a year in terms of imbalance with China."

Rafael Cruz
stated on July 31, 2015 an interview with the Austin American-Statesman:
"Prior to 1962, everybody prayed before school started," and "the Bible was the principal textbook in all schools."

Sandra Smith
stated on July 28, 2015 an interview with Mike Huckabee:
"Almost 95 percent of all (Planned Parenthood) pregnancy services were abortions."

Bill O'Reilly
stated on July 27, 2015 an interview on "The O'Reilly Factor":
Russia and China "absolutely said pretty clearly" they would not keep economic sanctions on Iran if the United States "walked away from the deal."

Jose Diaz-Balart
stated on July 26, 2015 a pundit panel segment on "Meet the Press":
"The majority of the Hispanic population and the growth (of the population) is U.S.-born."

Occupy Democrats
stated on July 17, 2015 a meme on Facebook:
"House Republicans just passed a bill that makes it legal for single mothers to be fired by their employers."

Jon Stewart
stated on July 21, 2015 an interview on "The Daily Show":
The United States is "fighting with Iraqis to defeat ISIS along with Iran. But in Yemen we're fighting Iran with Iraqis and Saudis."

Other Space
stated on July 14, 2015 in a Change.org petition:
"By declaring that Pluto was no longer a planet, the (International Astronomical Union) put into place a planetary definition that would have even declassified Earth as a planet if it existed as far from the sun as Pluto does."

Bobby Jindal
stated on July 15, 2015 comments on "Fox News Sunday":
"In New Orleans, nearly 100 percent of our kids are in charter schools."

Jan Brewer
stated on July 8, 2015 comments on CNN:
"We know from ... the federal data, that they only stop or apprehend one out of four illegal people crossing our border."