Bobby Jindal
stated on July 15, 2015 in comments on "Fox News Sunday":
"In New Orleans, nearly 100 percent of our kids are in charter schools."

"In Louisiana, we privatized our state charity hospital system. We've got statewide school choice, where the dollars follow the child instead of the child following the dollars. In New Orleans, nearly 100 percent of our kids are in charter schools. Doubling the number doing reading and math on grade level in five years."

Is New Orleans that different?

New Orleans’ charter school rate is uncharacteristically high even compared to other Louisiana districts, as the following chart shows. 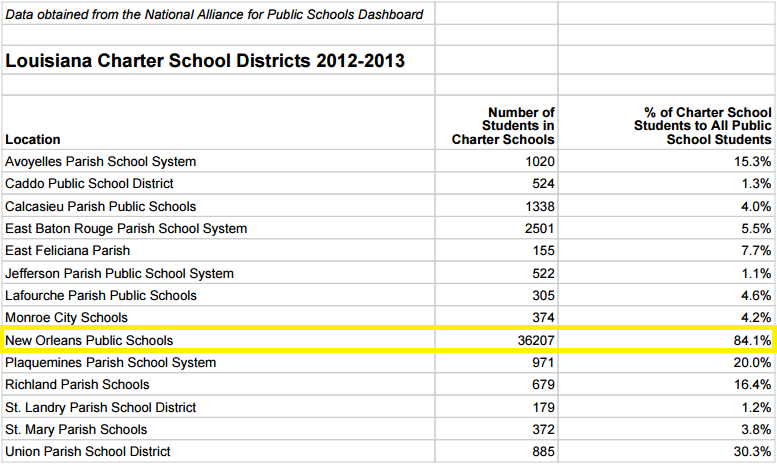 Why do students overwhelmingly attend charter schools in New Orleans?

The answer may have something to do with the sheer number of charter schools there. Of the 82 schools currently in the Orleans Parish, 76 are charter schools. Only 6 are non-charter public schools.

In 1998, the first charter school opened in New Orleans. However, it would be almost a decade before charter schools became prevalent in there.

The Louisiana Legislature established the Recovery School District in 2003. The RSD "is a special school district run by the Louisiana Department of Education that intervenes in the management of chronically low-performing schools."

That year, "chronically low-performing schools" were defined as those that earned the "lowest performance label, Academically Unacceptable (AUS), for four consecutive years."

After the Louisiana Board of Elementary and Secondary Education gave the RSD the green light to take control of the schools, the RSD had the choice of either "directly operat(ing) the schools itself, or to contract with universities or non-profit organizations to operate them as charter schools."

Laura Hawkins, the deputy chief of staff at RSD, said the RSD always had the goal of establishing charter schools, believing from the start that it was "the best strategy."

Still, before 2005, there were only a handful of charter schools in New Orleans. "Charter schools were a nascent movement," said Hawkins.

And then Hurricane Katrina came.

Brian Beabout, a professor of educational leadership at the University of New Orleans, has studied education reform in post-Katrina New Orleans. "In the aftermath of Hurricane Katrina, (New Orleans) temporarily lost 100 percent of its students and did not reopen a single school for more than two months," Beabout wrote in a 2007 article.

When the Orleans Parish School Board did reopen public schools in January 2006, those schools were reopened as charters. Why? "OPSB opted to open the schools as charter schools to take advantage of the U.S. schools," said a Cowen Institute report.

"(The OPSB) had easy access to government money," said Hawkins.

Part of the Katrina legacy

After the hurricane, many in New Orleans realized they had the opportunity to start with a "clean educational slate" and restructure the school system. In response, the state Legislature introduced Act 35.

"(This) amendment changed the focus from chronically failing individual schools and added a ‘district in academic crisis,’ " Beabout said.

"(The amendment) was tailored specifically to wrest control of New Orleans public schools from the locally elected school board and put them in the hands of the RSD. They defined any district with a certain percent of failing schools as "in crisis" and took control of all schools in the district which performed below the state average.

Initially, 114 schools were transferred over the RSD for control. The Cowen Institute reports that under Act 35, the RSD "was empowered to lease, rebuild, or renovate the school facilities as necessary for the successful operation of schools, but it could not sell any school buildings, as they still belonged to the OPSB."

For the record, all of this largely played out before Jindal was elected governor in 2007.

However, the high percentage is a reflection of the fact that the majority of schools in New Orleans are charter schools. Most of them were established after public schools within "in crisis" school districts (read New Orleans Public Schools) were handed over to the state-controlled RSD in the aftermath of Hurricane Katrina. Over the years, these schools were converted to charter schools.

Jindal’s statement is accurate. We rate it True.

Email interview with Brian Beabout, professor of educational leadership at the University of New Orleans, July 14, 2015

Bruce Rauner
stated on March 15, 2017 In a tweet :
"Our families have the highest property taxes in the country. We must change this."

Rahm Emanuel
stated on November 15, 2016 Interview with Bill Kurtis :
[Chicago is the] only city in the United States, you get a B average in high school, community college is free.

Brad Schneider
stated on September 16, 2016 a campaign tweet:
Says Republican U.S. Rep. Bob Dold "continues to side with his Republican leadership and the NRA in blocking consideration of a bill that would keep firearms out of the hands of people on the terrorist watch list."

Donald Trump
stated on November 10, 2015 a debate in Milwaukee, Wis.:
"We’re losing now over $500 billion a year in terms of imbalance with China."

Rafael Cruz
stated on July 31, 2015 an interview with the Austin American-Statesman:
"Prior to 1962, everybody prayed before school started," and "the Bible was the principal textbook in all schools."

Sandra Smith
stated on July 28, 2015 an interview with Mike Huckabee:
"Almost 95 percent of all (Planned Parenthood) pregnancy services were abortions."

Bill O'Reilly
stated on July 27, 2015 an interview on "The O'Reilly Factor":
Russia and China "absolutely said pretty clearly" they would not keep economic sanctions on Iran if the United States "walked away from the deal."

Jose Diaz-Balart
stated on July 26, 2015 a pundit panel segment on "Meet the Press":
"The majority of the Hispanic population and the growth (of the population) is U.S.-born."

Occupy Democrats
stated on July 17, 2015 a meme on Facebook:
"House Republicans just passed a bill that makes it legal for single mothers to be fired by their employers."

Jon Stewart
stated on July 21, 2015 an interview on "The Daily Show":
The United States is "fighting with Iraqis to defeat ISIS along with Iran. But in Yemen we're fighting Iran with Iraqis and Saudis."

Other Space
stated on July 14, 2015 in a Change.org petition:
"By declaring that Pluto was no longer a planet, the (International Astronomical Union) put into place a planetary definition that would have even declassified Earth as a planet if it existed as far from the sun as Pluto does."

Bobby Jindal
stated on July 15, 2015 comments on "Fox News Sunday":
"In New Orleans, nearly 100 percent of our kids are in charter schools."

Jan Brewer
stated on July 8, 2015 comments on CNN:
"We know from ... the federal data, that they only stop or apprehend one out of four illegal people crossing our border."