Don Zimmerman
stated on April 27, 2015 in an Austin City Council briefing:
"You don't have to be as smart as a fifth-grader to know what causes the climate is the sun. The sun.  I have people tell me, ‘Carbon dioxide warms the Earth.’  No, it doesn't.  The sun warms the Earth."

In April 2015, Katharine Hayhoe, a Texas Tech University climate scientist, briefed the Austin City Council on the consequences of climate change on Texas. Scientists generally agree that industrial and auto emissions from the burning of fossil fuels contribute to global warming.

But Don Zimmerman, the council member representing District 6, was dismissive of Hayhoe’s presentation, saying there’s "no way to have definitive science on something so nebulous and so foolish as climate change."

"You don't have to be as smart as a fifth-grader to know what causes the climate is the sun," Zimmerman said. "The sun.  I have people tell me, ‘carbon dioxide warms the Earth.’  No, it doesn't.  The sun warms the Earth."

We remember graphic textbooks – carbon paper inside! – and goggles in fifth grade. But we were not quite advanced enough at the age of 10 for climate science; that didn’t roll around till high school astronomy. We remember learning in that class that the sun is the chief source of energy in our solar system, but we also remember studying how greenhouse gases – like carbon dioxide – helped trap warmth from the sun. (We recall a textbook diagram showing rays from the sun smacking off the surface of the Earth before reflecting back into the atmosphere; aptly named greenhouse gases prevented all the heat from escaping.) 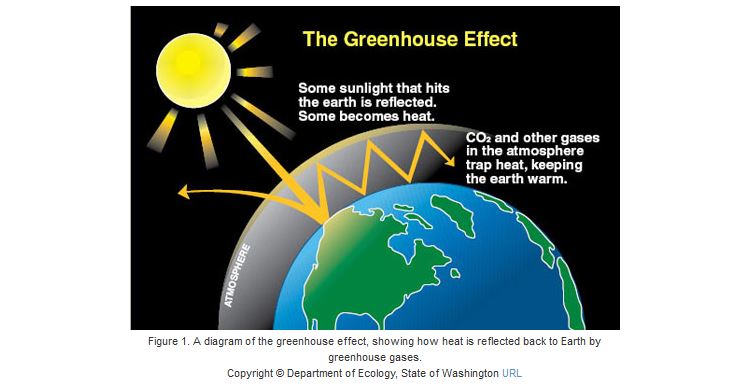 So, did we remember our science correctly? Or, put another way, was Zimmerman correct that "what causes the climate is the sun" and that the "sun warms the Earth," or was he just blowing hot air?

We asked Zimmerman to elaborate on his statement. "It’s common sense," he told us, "that the source of energy that drives everything is the sun."

By email, a Texas A&M University professor who doubles as the climatologist for the state of Texas, John Nielsen-Gammon, told us that, indeed, save negligible amounts of heat generated within the Earth, "the sun is the source of the energy that drives the climate system."

Score one for Zimmerman!

But, Nielsen-Gammon went on, everything from volcanic eruptions to carbon dioxide can also affect Earth’s climate. "If carbon dioxide concentrations increase, for example, the sun drives the Earth to a higher temperature because the solar energy that the Earth absorbs cannot escape to space as efficiently," he said.

Score one against Zimmerman!

Climatologist Steven Quiring, Nielsen-Gammon’s Texas A&M colleague, had a similar take: "The sun is important. It is the primary source of energy for the climate system."

"However, the Earth's atmosphere is also very important," Quring said by email.

So why the large difference? "It turns out that having an atmosphere is very important," Quiring said. "In particular, the Earth's atmosphere contains a number of greenhouse gases that are very effective at absorbing energy (at certain wavelengths) and re-radiating it back to the Earth's surface.

"If Mr. Zimmerman thinks that having an atmosphere does not matter, perhaps he should try to live on the moon for a while."

In Texas, by the way, it’s not until Grade 8 that public school students are expected to "identify the role of natural events in altering Earth systems," according to state curriculum guidelines published by the Texas Education Agency, which state: "Students learn how interactions in solar, weather, and ocean systems create changes in weather patterns and climate."

And it’s only toward the end of high school that students are meant to learn the "interacting components of Earth's system change by both natural and human-influenced processes."

"Some human-influenced processes such as pollution and non-sustainable use of Earth's natural resources may damage Earth's system," the guidelines say. "Examples include climate change, soil erosion, air and water pollution, and biodiversity loss. The time scale of these changes and their impact on human society must be understood to make wise decisions concerning the use of the land, water, air, and natural resources. Proper stewardship of Earth will prevent unnecessary degradation and destruction of Earth's subsystems and diminish detrimental impacts to individuals and society."

We bounced all this off Zimmerman, who stood by his solar statement.

Zimmerman said that as every child learns, the sun warms the Earth—and, he said, carbon dioxide does not.

We remember: The sun warms the Earth. But Zimmerman’s bigger point--discounting the role of carbon dioxide in climate change--disregards international scientific consensus.

Don Zimmerman
stated on April 27, 2015 an Austin City Council briefing:
"You don't have to be as smart as a fifth-grader to know what causes the climate is the sun. The sun.  I have people tell me, ‘Carbon dioxide warms the Earth.’  No, it doesn't.  The sun warms the Earth."