Bernie Sanders
stated on August 30, 2015 in comments on ABC's "This Week":
"Saudi Arabia has the third-largest military budget in the entire world."

Democratic presidential candidate Bernie Sanders has so far centered his campaign around domestic issues such as income inequality, campaign finance reform and college affordability. In a Sunday interview on ABC’s This Week, however, host Martha Raddatz took the opportunity to ask the Vermont senator about an issue that isn’t even included on his campaign website -- foreign policy.

Sanders said he thought the United States could have forced Saddam Hussein out of Kuwait without invading, and that military action should be "the last resort, not the first resort."

We wondered about Sanders’ claim that Saudi Arabia, with a population roughly the size of Texas, has the "third-largest military budget in the entire world."

Sanders’ campaign pointed us to the latest statistics from the International Institute for Strategic Studies (IISS), widely cited as an authoritative source for international security statistics. We looked at IISS figures for a separate defense-related fact-check last year.

According to estimates from the IISS, Saudi Arabia did have the world’s third-largest military budget in 2014, at around $80.8 billion. Its budget was smaller than only those of China and the United States. 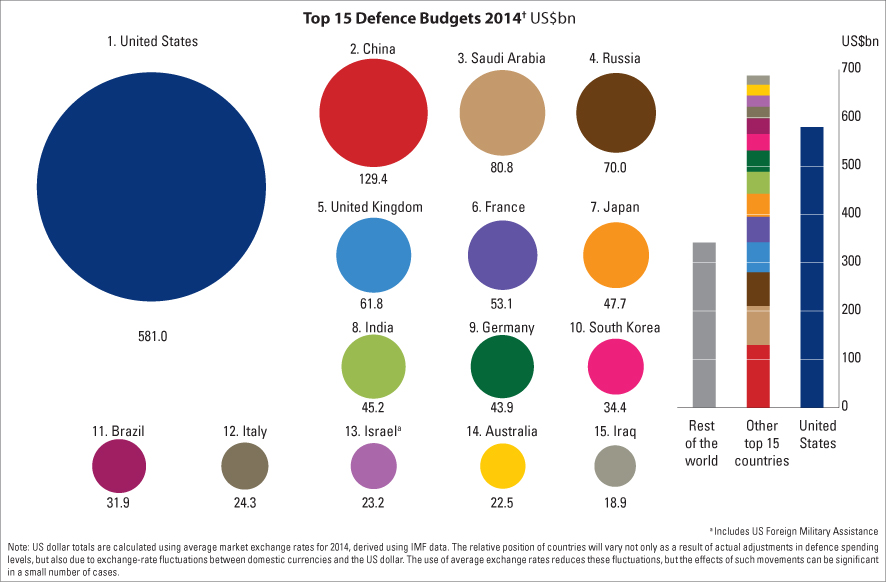 On that list, Saudi Arabia ranked fourth in 2014, behind the United States, China and Russia.

Why the difference? SIPRI estimates that Russia spent around $84 billion on defense in 2014, almost $14 billion more than the IISS estimates it budgeted.

The dataset’s footnotes, however, make clear that Saudi Arabia likely spent much more than $80 billion on military-related activities in 2014. SIPRI says its numbers "may not include billions of dollars of military aid for Lebanon and Egypt that was announced in 2013 and 2014."

Saudi Arabia hasn’t always spent this much on its military. Its defense budget has grown fourfold in the last 10 years, from around $20 billion in 2004 to $80 billion in 2014, an increase that reflects the intensification of the Saudis’ military involvement in the rest of the Middle East.

For the record, SIPRI’s best estimates for military expenditures in North Korea and Iran are significantly below the budget of Saudi Arabia’s defense.

Sanders said, "Saudi Arabia has the third-largest military budget in the entire world."

While there are a few different ways to calculate this statistic, both studies we looked at placed the size of Saudi Arabia’s military budget at or near No. 3 in the world.

Viral image
stated on September 3, 2015 an image shared on Facebook:
" 'Denali' is the Kenyan word for 'black power.' "

Bernie Sanders
stated on August 30, 2015 comments on ABC's "This Week":
"Saudi Arabia has the third-largest military budget in the entire world."

Julius Jones
stated on August 17, 2015 an interview on MSNBC:
"The policy mistakes that ... the Clintons made got us, in large degree, to the situation that we are in today with mass incarceration."

S.E. Cupp
stated on August 23, 2015 an interview on "State of the Union":
"There are actually only 30 countries that practice birthright citizenship."

Howard Dean
stated on August 12, 2015 an interview on "Morning Joe":
"There’s a tremendous other number of public officials who have done the same thing" as Hillary Clinton with a private email server.

Bernie Sanders
stated on August 16, 2015 an interview on "Meet the Press":
"We spend almost twice as much per capita on health care as do the people of any other country."

George Will
stated on August 7, 2015 a Washington Post column:
Says Bernie Sanders chose "to spend his honeymoon in the Soviet Union in 1988."

Donald Trump
stated on August 9, 2015 a Meet the Press interview:
"Some of the things that (Megyn Kelly) said, I didn’t say."

Harry Houck
stated on July 21, 2015 a panel debate on "CNN Tonight with Don Lemon":
"The law says ... when a police officer stops you, do whatever he says and then deal with it later."

John Oliver
stated on July 19, 2015 a segment on "Last Week Tonight":
"With the exception of baby formula, the federal government does not require any food to carry an expiration date, and state laws vary widely."