Texas Liberty PAC
stated on February 22, 2014 in a sign spotted outside a polling place in Austin:
Says Lamar Smith "sponsored the bill that funded Obamacare."

We spotted this sign making an Obamacare claim about Lamar Smith outside an Austin polling place Feb. 23, 2014.

No Republican in Congress voted for the 2010 health-care overhaul known as the Obamacare law. But red-and-white "Stop Lamar Smith" signs that cropped up recently in Austin charge that Smith, a Republican U.S. House member from San Antonio, "sponsored the bill that funded Obamacare."

The sign attributes the claim to the Texas Liberty PAC. Founder Dave Nalle of Manor told us the group is a newborn Republican-initiated super PAC focused on defeating Smith.

The claim stood out to us because Smith voted against the Affordable Care Act, and he doesn’t serve on the House Appropriations Committee, where spending bills originate.

And what was the basis of the anti-Smith sign? By email, Nalle said Smith "introduced" the 2014 Omnibus Spending Bill, or House Resolution 3547, which became law on Jan. 17, 2014, according to an online summary posted by Congress. The summary identifies Smith as the proposal’s sponsor. And, Nalle told us, the law "was the primary vehicle through which programs passed in the Affordable Care Act were funded."

First, we’ll look at what was in that act, and then we’ll tackle Smith’s role.

The spending plan funded the government through September 2014. It cleared the House by 359-67 with Smith voting in favor of it. In a Jan. 15, 2014, press release, Smith said that he supported the spending bill for reasons including defense spending, saying too that the measure did not provide "additional funding" for the Obamacare law.

A news story posted Jan. 15, 2014, by the Hill, a Capitol Hill newspaper, quoted Rep. Hal Rogers, R-Ky., the Appropriations Committee chairman, as saying: "We've made sure that this bill provides no new funding for Obamacare and have even cut existing Obamacare funds to the tune of over $1 billion." The newspaper said Rogers was referring to a $1 billion cut to a preventive health care fund intended under the Obamacare law.

So, the spending plan with Smith’s name attached had at least some funding of the Obamacare law — and it funded many other government initiatives as well.

To gauge Smith’s listed sponsorship of the act, we queried experts including Donald Wolfensberger, a former longtime congressional staff member who directs the Congress Project at the Woodrow Wilson International Center for Scholars.

That’s when this claim began to grow, well, spacy.

Wolfensberger told us by email and telephone that Smith’s involvement began when he sponsored an unrelated minor piece of legislation. That bill morphed into the vehicle chosen by congressional leaders to get the crucial spending package passed. Smith "was a hapless victim in some way," Wolfensberger said.

Let’s cut to the details.

On Nov. 20, 2013, Smith introduced a one-page proposal extending the license application deadline for commercial space launch indemnity insurance, which then "passed the House under suspension of the rules (a process for noncontroversial matters), and then the Senate with an amendment," Wolfensberger noted. These actions occurred Dec. 2 and Dec. 12, 2013, Congress says.

Instagram posts
stated on September 6, 2022 in an Instagram post
Astronaut Karen Nyberg filmed what “was supposedly a video from space” in front of a green screen. 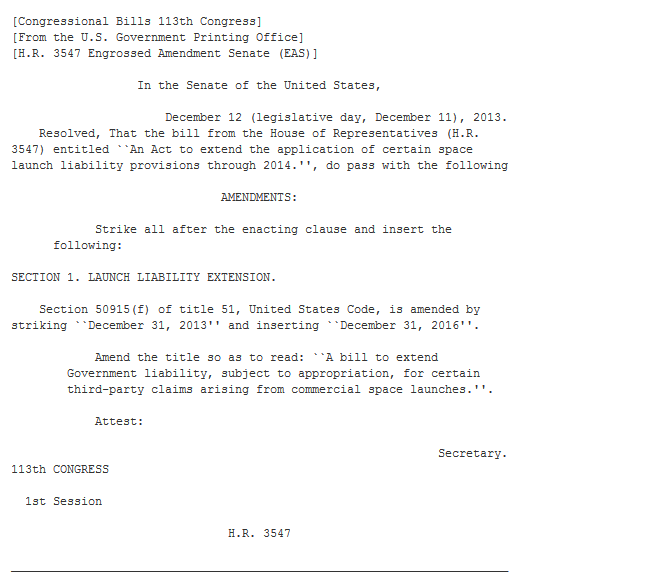 After the Senate version of the proposal returned to the House, Wolfensberger said, "Smith’s bill was used as the vehicle in which to stuff the 1,500-page, $1.012-trillion omnibus government funding bill," which then cleared the House and Senate to be signed into law by President Barack Obama on Jan. 17, 2014. It’s nearly 650 pages long, including the limited language of Smith’s original.

There was a procedural rationale for changing Smith’s space proposal into the spending plan. Wolfensberger said because the original legislation had already been acted on by the Senate, the House-embraced appropriations swap-in removed an opportunity for Senate opponents to stall it. It all comes down to the parliamentary rules that govern Congress.

"It’s still possible to filibuster the meat of a matter from the House," he said, "but there is no option to block proceeding to consideration of a House measure already amended by the Senate that’s coming back from the House."

Separately, Smith’s office emailed us an April 5, 2013, report by the nonpartisan Congressional Research Service confirming this point and stating: "The ability to take up a matter without debate can potentially make a difference in the Senate because the Senate then needs to end debate only on the main question (or questions)."

Stan Collender, who has written a guide to the federal budget, said by email that most of the Obamacare law’s provisions did not need funding through the appropriations act. "Saying that" Smith "sponsored the bill that funded Obamacare is a gross misstatement," Collender said.

Also by email, political scientist Roy Meyers of the University of Maryland, Baltimore County, said that while the omnibus act provided some funding to administer the Obamacare law, Smith’s original bill was for a different purpose. "So it's really a classic dirty trick by the Texas Liberty PAC to not acknowledge that the House Rules Committee made this bill the vehicle for passing the Consolidated Appropriations Act, amending the original bill to add all of the appropriations language," Meyers said.

Smith’s office also sent us an email including Smith’s statement tracking with what we heard from the outside congressional observers. Jennifer Hing, a staff spokeswoman for the House Appropriations Committee, further told us by email that Smith’s measure was the only Senate-approved House bill available at the time the appropriations act was rolled into it.

We circled back to Nalle, who said the conversion of Smith’s proposal into the appropriations vehicle doesn’t take away from the fact that Smith sponsored the act funding the Obamacare law. "To suggest that he is not responsible for the sponsorship of a bill which he did sponsor and which he voted to amend and to pass is disingenuous," Nalle emailed. "His votes show that he clearly supported the bill just as much when it passed as when it was originally written. There was no point in the process in which he, as sponsor of the bill, did not cooperate with and support the process which produced the final bill."

To the contrary, legislative leaders amended a brief Smith proposal related to space ships to fold in the 2014 appropriations act, which included some Obamacare-tied expenditures.

This claim distorts a leadership strategic maneuver to continue government spending to misrepresent Smith’s role and position on the Obamacare law. We rate it as False.