Liz Cheney
stated on April 6, 2014 in comments on "Fox News Sunday":
"The numbers of people that support Obamacare and like it have been steadily dropping."

Conservative pundits often incorporate polling data into their arguments against the Affordable Care Act, and it’s no wonder: Polls usually reveal that a plurality find the law unpopular.

But a claim by Liz Cheney, the former conservative Wyoming Senate candidate and daughter of former Vice President Dick Cheney, shows how polling trends can be easily flubbed on TV.

As part of a political roundtable on Fox News Sunday on April 6, Cheney tried knocking down Democratic cheering about news from the White House that 7 million people signed up for Obamacare. The real story? The law is losing support, she said.

"The numbers of people that support Obamacare and like it have been steadily dropping," she said. "The latest Wall Street Journal polls show that."

PunditFact wanted to know if Cheney’s point is accurate. We didn’t hear back from her after reaching out on Twitter.

We wanted to look at the evolving support and opposition for the health care law, and not just from the Wall Street Journal.

Sites like Huffington Post Pollster and Real Clear Politics offer averages of several polls to give readers an idea of the public’s changing views of the law since its infancy. It’s not a perfect way of looking at the data, as the survey questions are not identical and the polls vary in size.

According to a Real Clear Politics average of nine major polls from March 16-31, 40.4 percent of Americans favor the law and 52 percent do not. This is less than 2 percentage points shy of the favorability mark for much of March a year ago, and down a bit from a recent high of 42.6 percent at the end of October (the highest average on Real Clear Politics was 43 percent in June 2010). As problems with the online insurance marketplaces mounted last fall, approval for the law fell, hitting 36.9 percent in December. Approval ratings since have spurted up and down to their most recent place. See the chart.

HuffPost’s Pollster shows a similar trend in its aggregration. The most recent average for people who favor the health care law is 41.2 percent, down from 42.1 percent in October but up from 38.1 percent in December. After the health care law passed in March 2010, poll averages hovered between 40 and 43 percent for the rest of the year before falling off a bit. Obama’s re-election gave the favorability ratings another boost during the end of 2012, peaking at 43.4 percent. 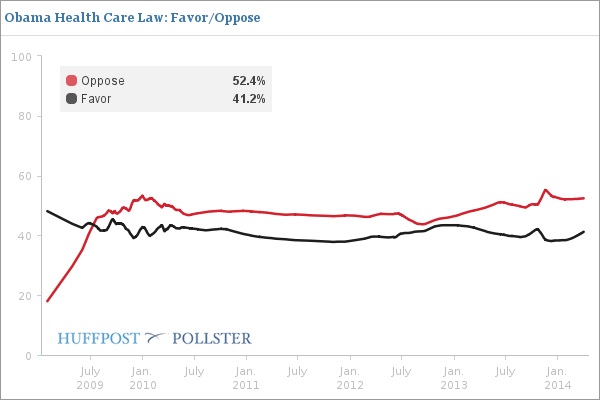 Polls on the health care law have been pretty consistent, said Karlyn Bowman, senior fellow at the conservative American Enterprise Institute. She pointed to AEI’s March 2014 study of health care polling by nine major pollsters since 2009. Shifts in support for the law have not been one of the bigger storylines because it has not changed that dramatically, she said. People usually chew on President Barack Obama’s favorability ratings or how he is handling the law’s implementation.

Not even the poll Cheney singled out provides persuasive evidence for her claim that supporters have been turning against the law. The latest Wall Street Journal/NBC News poll was a March 5-9 survey of 1,000 adults with a margin of error of 3.1 percentage points.

The poll asked, "From what you have heard about the new health care law, do you think it is a good idea or a bad idea?" and then "do you feel that way strongly, or not so strongly?"

Previous NBC/WSJ surveys, of which there were eight since June 2013, don’t show a recent favorability freefall. 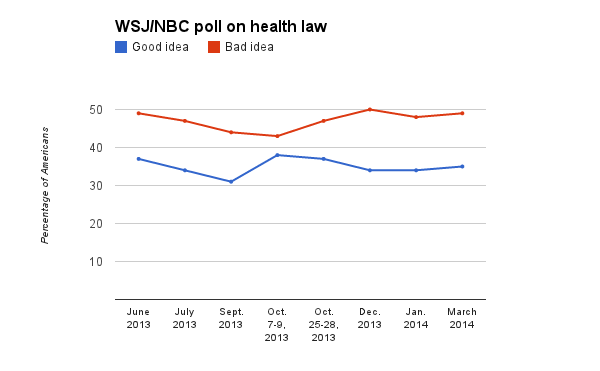 "It is clearly more unpopular than popular, but negativity isn't growing in this poll," Bowman said.

In fact, a new poll from ABC News and the Washington Post has Democrats hoping they’re flipping the Obamacare narrative. For the first time in at least 20 ABC/Post polls since August 2009, more people said they supported the law than opposed it, with support hitting a high of 49 percent. The 49 percent-48 percent margin could mean divisions are closer to a dead heat in the months after botched healthcare.gov rollout. Support was 40 percent and opposition was 57 percent in a November 2013 ABC/Post poll.

Whether it’s an outlier or a new direction remains to be seen.

"It could be that the tide is turning," Bowman said. "We just don’t know."

Cheney said, "The numbers of people that support Obamacare and like it have been steadily dropping."

Americans remain divided on the health care law, and most polls show that more people oppose it than support it.

But we found no evidence that people who once supported the law are "steadily" changing their minds -- not even in the poll Cheney specifically cited. We rate Cheney’s claim False.