How healthy is the economy Joe Biden is inheriting?

• Economists agree that the key to improving the economy will be to defeat the coronavirus. After the pandemic is over, there may be some lasting economic damage, but hard-hit sectors like leisure and hospitality may be able to bounce back significantly once the virus is under control.

• The unemployment picture has improved significantly since the early days of the pandemic, partially due to relief bills passed by Congress. But unemployment remains higher than its pre-pandemic level.

• Economists are worried about people hit hardest by the pandemic recession — those in battered sectors like hospitality, whose long stretches of unemployment will put them at a future disadvantage in a recovering labor market.

Two days after he was sworn in, President Joe Biden painted a grim picture of the economy amid the coronavirus pandemic.

"We remain in a once-in-a-century public health crisis that’s led to the most unequal job and economic crisis in modern history," Biden said. "And the crisis is only deepening. It’s not getting better. It’s deepening."

Fairly or not, presidents are evaluated on how the economy performs on their watch. So we wondered: How good or bad is the economy as Biden takes office?

For answers, we looked at some key economic statistics and talked to a variety of economists.

Something the economists agreed on is that the economy won’t pull out of the current recession until the coronavirus pandemic is over, because Americans have internalized the risks of engaging in economic activities such as going out to eat, traveling, and enjoying in-person entertainment.

"The story of the economy is basically the coronavirus," said Tara Sinclair, a George Washington University economist.

Douglas Holtz-Eakin, president of the right-of-center American Action Forum, agreed. "There will be some residual damage after the pandemic is over, but the primary thing that needs to be done is to effectively control the virus," he said.

Meanwhile, the total number of employed Americans has risen by 9% since its low point in April 2020, but it remains down 6% from its pre-pandemic high.

And while weekly initial jobless claims have fallen by 87% from their peak in late March 2020, they remain stubbornly high — about four times higher than their typical level.

Last year’s change in gross domestic product — the basic measure of all economic activity — was the worst since 1946, when the nation was demobilizing from World War II, the government announced Jan. 28. that GDP shrank by 3.5% between 2019 and 2020.

Here’s a rundown of the change in quarterly GDP since the start of 2017. (The numbers in the chart are annualized, meaning that they show the scale of growth or shrinkage if that quarterly pace had continued for the entire year.) 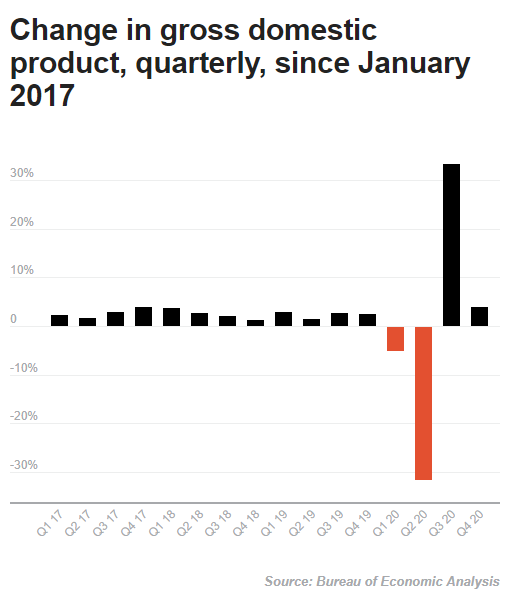 The data for the last two quarters show a significant comeback — the economy is no longer in freefall. But overall economic activity remains below its pre-pandemic level, which strongly suggests that the recession isn’t over yet.

Which sectors have been hit hardest?

One notable element of the current recession is that some sectors are faring far worse than others.

"The December jobs report tells you the story in a nutshell," Holtz-Eakin said. "The economy lost 140,000 jobs in December because the leisure and hospitality sector lost almost half a million jobs, while the rest of the economy added jobs."

The leisure and hospitality sector includes everything from museums, theaters and spectator sports to restaurants and hotels, and it was one of the nation’s biggest employment sectors ahead of the pandemic, employing more people than such sectors as construction, manufacturing, transportation, and finance. When the pandemic hit, the leisure and hospitality industry suffered far worse than any of the others. By December 2020, employment in this sector was down 23% from its pre-pandemic level.

The other sectors also remain below their pre-pandemic peaks, but by much smaller margins, between 1% and 4%.

The bad news, economists say, is that some of these jobs will never come back. For instance, if working from home becomes more common even after the pandemic is over, that could hobble the commercial real estate industry, Holtz-Eakin said. The airline industry could also suffer if companies become less eager to send employees out of town for meetings that could take place on Zoom instead

The better news is that many sectors of the economy could be poised to bounce back quickly after the virus is under control.

If gathering in restaurants and traveling becomes feasible due to a vaccine later this year, Sinclair said, "there will be a lot of pent-up desire to spend. People will want to take three-week vacations and get all the massages they want."

Federal data provides reason for optimism, showing that Americans have been saving money at unusually high levels in recent months. 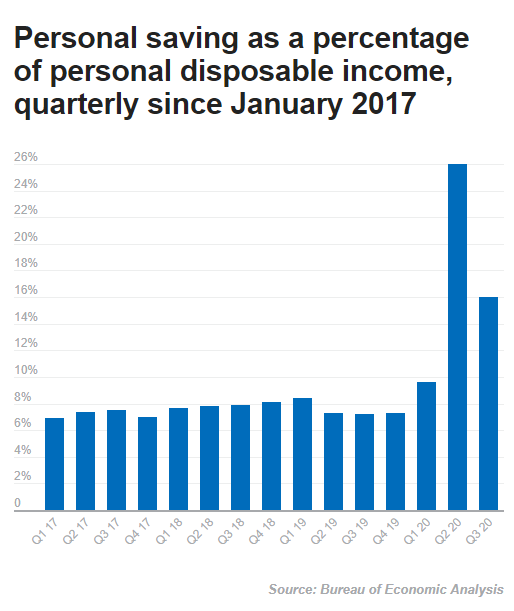 Economists agreed that the divergence between some Americans and others is worrisome. This has been called the "K-shaped" recovery — one in which those with adaptable jobs remain employed and are able to save more of their income, and those with jobs in hard-hit sectors like restaurants and tourism struggle with unemployment and financial shortages.

"If you’re a high-skilled worker, the recession is essentially over," Holtz-Eakin said. "If you’re not, it’s very deep."

Holtz-Eakin said he’s worried that small businesses that have closed during the pandemic won’t be able to come back when it’s over. He’s also worried that the long-lasting pandemic has left too many workers unemployed for too long. That matters because, historically, the longer a worker is unemployed, the harder it is to get them working again when the job market improves.

Sinclair, however, said she’s cautiously optimistic that the burst of demand for services that were shuttered during the pandemic could bring back a lot of jobs that have been lost.

What can Biden do?

Holtz-Eakin, who advised John McCain’s 2008 presidential campaign, said the scale of the bill may be overkill, given how much the economy has bounced back so far. He prefers to see aid targeted to the longer-term unemployed.

But Gary Burtless, a senior fellow at the Brookings Institution, said that previous federal relief effort, despite some imperfections, was effective and that the new proposal could be as well.

"The CARES Act passed last March did a terrific job in maintaining consumers’ and small businesses’ spending power," he said. "My confidence in a rapid rebound would be even greater if I thought Congress could muster the will and good sense to provide continuing financial relief to the worst hit families and sectors of the economy. Such relief should have been provided without interruption since last March."

Ultimately, he said, if the pandemic wanes through vaccination, "I’m reasonably confident that the economy can rebound quickly."