Save the coal industry

"We're going to put our miners back to work."

Donald Trump's pledge during the 2016 presidential campaign to save the coal industry helped him assemble strong support in coal states such as West Virginia and Kentucky.

Once in office, Trump loosened regulations for the industry and was a big cheerleader on the hustings for coal. He revoked the Stream Protection Rule; signed an executive order to begin dismantling the Clean Power Plan, an Obama administration policy that sought to limit carbon emissions; lifted a temporary ban on new coal leasing on federal land; and pulled out of the Paris Climate Agreement on June 1.

However, there is only so much that one president can do to save an industry besieged by global trends that put coal at a disadvantage in the marketplace.

Here's a look at total output for the coal industry, under both President Barack Obama (in blue) and Trump (in red). The data comes from the Federal Reserve Board's industrial production index, which tracks monthly changes in inflation-adjusted output for the sector.

The chart shows a slow but consistent decline in output for the coal sector. 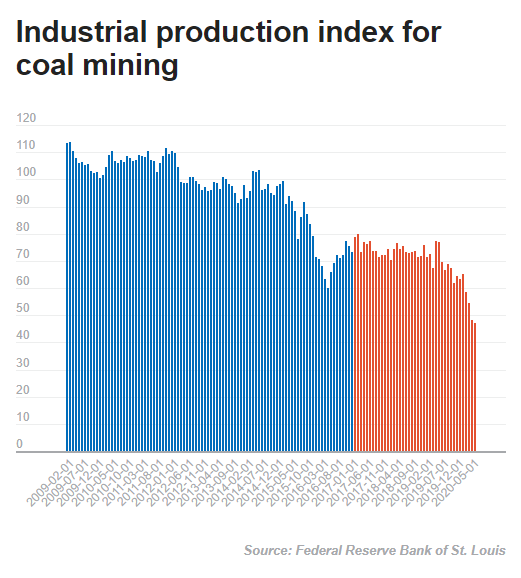 Employment in the coal sector has fared better, though it's still only treading water. This chart shows the employment level in coal mining under both presidents. 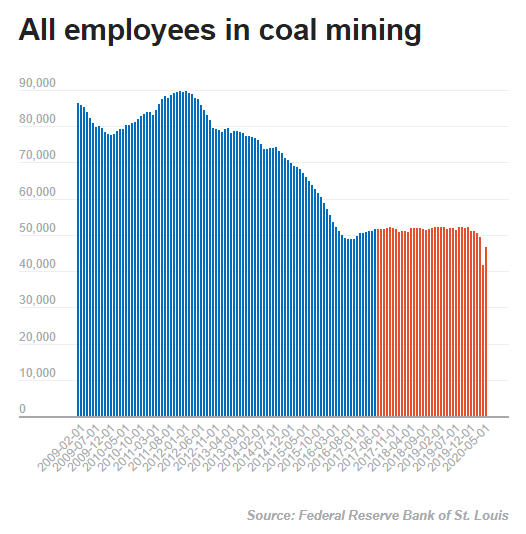 Under Trump, the industry did halt its years-long employment decline under Obama. But coal employment has remained at roughly the same level during Trump's tenure, with the future uncertain due to the coronavirus pandemic.

The big problem facing coal is that utilities in the U.S. and other countries have for years been shifting away from coal and toward natural gas and renewable energy sources. This shift has been driven by both price concerns and worries about coal's carbon content, which has been linked to climate change.

While China has recently signaled an increase in coal use to help the recovery from the coronavirus-driven recession, that is an exception from global trends. Two dozen U.S. power companies, including Duke Energy Corp. and Southern Co., have pledged net-zero emissions by mid-century, and no new coal plants are planned for construction, according to E&E News.

And because these changes require utilities to make sizable capital investments, they are not easy to reverse.

"Loosening environmental regulations hasn't really helped much, as switching away from coal is driven by market rather than regulatory factors," said Anna Mikulska, a fellow at Rice University's Center for Energy Studies. "The cost of natural gas and renewable power has declined steadily, and coal cannot compete. Many coal companies, including Murray Energy, filed for bankruptcy last year."

At most, Trump's extensive deregulatory efforts have reversed the employment freefall under Obama and postponed coal's day of reckoning. It's not exactly a strong comeback, but it's enough to rate this promise a Compromise.

On the campaign trail, President Donald Trump responded to years of declining jobs in the coal industry with a vow to "put miners back to work" by repealing Obama-era regulations.

These regulations, Trump argued, were harming coal companies' ability to stay in business.

Exactly how many coal mining jobs were lost? During Barack Obama's presidency, the number of coal miners employed in the United States hit a high of just under 90,000 in 2012 then descended to a record low of 48,000 in July 2016, according to Bureau of Labor Statistics data.

Several months into Trump's first term, we figured it was time to check in on the White House's progress toward restoring the coal industry.

A glance at more recent data indicates small improvement since Trump took office: 600 coal mining jobs have been created. (This is down from 800 jobs in May, and it's not nearly as many as the 45,000 new coal mining jobs that Trump falsely claimed in July.)

Coal production is also up slightly from where it was at this time last year, and freight rail traffic data show more coal is being shipped by rail in 2017 than in 2016.

"At this point it's probably too soon to say that it's based on any sort of action by the current administration," said Matthew Preston, a research director for Wood Mackenzie, which provides consulting and research services on energy industries. He has, however, seen a modest uptick in coal investments in response to regulation rollbacks.

• Trump, along with congressional Republicans, in February revoked the Stream Protection Rule, which was put into effect just weeks prior on Jan. 19.

• On March 28, Trump signed an executive order to begin the process of dismantling the Clean Power Plan, an Obama administration policy that sought to limit carbon emissions and placed strict regulations on coal-fired power plants. However, the Supreme Court halted enforcement of the policy a few months after it was announced, and states had until 2022 to comply.

• Also part of the March 28 executive order, Trump lifted a temporary ban on new coal leasing on federal land. An estimated 40 percent of coal mined in the United States comes from federal land.

• In another blow to Obama-era environmental initiatives, Trump pulled out of the Paris Climate Agreement on June 1. He argued that the agreement allowed other countries to use coal-fired power plants but banned the United States from doing so. This was not true.

Among these actions, Trump has also pointed to the opening of a coal mine in Pennsylvania as proof that his efforts to help the coal industry have produced tangible results. But the mine had been in the making since at least September 2016.

Trump has clearly at least taken steps to fulfill his campaign promise. What isn't clear is if rolling back recent regulations can actually bring back the thousands of jobs lost.

An April 2017 Columbia University study found that Obama-era environmental regulations were to blame for a 3.5 percent decline of coal production from 2011 to 2016. Coal production overall had declined 33 percent during that time period. This was mostly due to competition from natural gas, lower than expected electricity demand and the collapse of the Asian coal market.

The finding was corroborated in a recent study requested by Energy Secretary Rick Perry and released by the Energy Department.

"The repeal of environmental regulations may slow coal's further decline, but it won't bring coal back," said Jason Bordoff, a professor at Columbia University and founding director of the school's Center on Global Energy Policy.

Bordoff said the recent increase in U.S. coal production has largely to do with a temporary increase in Chinese demand for coal imports.

For what it's worth, American Coal Council representative Terry Headley said he thinks Trump's presidency has helped reinvigorate the coal industry.

"I live in West Virginia, and I'm seeing it every day," Headley said. "Coal mines are once again hiring, and some are even contemplating red hats (inexperienced miners) for the first time in years."

Headley was unable to point to any particular legislative changes or presidential actions that could explain the job increases. Rather, he attributed the boost to Trump's slashing of regulations in general.

Whether Trump's regulation rollbacks will bring back the roughly 40,000 coal mining jobs lost since 2012 still remains to be seen, but experts and researchers say that is highly unlikely.

Regardless, Trump has at least taken steps toward his goal. We rate this promise In the Works.