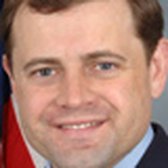 Tom Perriello, a Democrat, was elected in 2008 to represent Virginia's 5th Congressional District. He lost his 2010 re-election bid to Robert Hurt. Before his election, Perriello was involved in international justice and sustainable peace. Perriello was born and raised in Ivy. He earned a bachelor's degree in 1996 and a law degree in 2001, both from Yale University, New Haven, Conn.