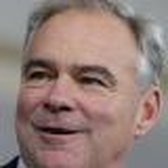 Tim Kaine is a U.S. senator representing Virginia, elected to the Senate in 2012. He was the 2016 Democratic nominee for vice president. Kaine was governor from 2006 to 2010, lieutenant governor from 2002 to 2006, mayor of Richmond from 1998 to 2001, and city councilman of Richmond beginning in 1994. He was also the chairman of the Democratic National Committee from 2009 to 2011. Kaine was born in St. Paul, Minn. He earned a bachelor's degree in economics in 1979 from the University of Missouri, Columbia, and a law degree from Harvard Law School, Cambridge, Mass., in 1983. He took a year-long break during law school to work with the Jesuit order as a Catholic missionary in Honduras, becoming fluent in Spanish.