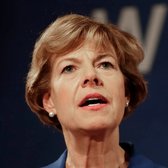 Tammy Baldwin was elected to the U.S. Senate on Nov. 6, 2012. She represented Wisconsin’s Second Congressional District from January 1999 to January 2013. She served as a member of the Wisconsin Assembly from January 1993 to January 1999. She was a Dane County supervisor from 1986 to 1994 and briefly served on the Madison Common Council, filling a vacancy, in 1986.