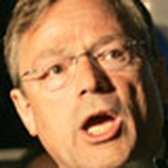 Democrat Steve Kagen of Appleton is a former member of the U.S. House. Until being defeated by Republican Reid Ribble in 2010, he represented Wisconsin's 8th District seat. The district, covering the Green Bay area is considered a swing seat. It previously had been held by Republican Mark Green, who left it in a failed bit for governor.