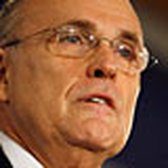 Rudy Giuliani is the former mayor of New York City. He was born in Brooklyn in 1944 and previously served as a federal prosecutor, as well as an associate attorney general under President Reagan. He graduated from Manhattan College and earned a law degree from New York University Law School. He has been married since 2003 to Judith Nathan and was married twice before. He has two children, Andrew and Caroline. He withdrew from the presidential race on Jan. 30, 2008.