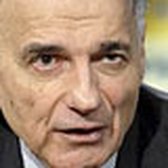 Ralph Nader, 74, ran for president in 2000 and 2004. Born in Winsted, Conn., in 1934, he graduated from Princeton University with a major in East Asian studies, and earned his law degree from Harvard. After a stint in the Army, he made his name as a consumer advocate with exposes on the auto industry, notably the 1965 book "Unsafe at Any Speed: The Designed-In Dangers of the American Automobile." He and his activist-disciples, known as "Nader's Raiders," successfully advocated consumer-banking laws, the Consumer Product Safety Commission, the Freedom of Information Act and a host of other reforms. A bachelor, he still resides in Winsted, though he spends much of his time in Washington, D.C.