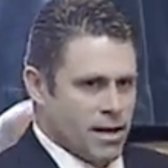 Republican Nick Freitas was first elected to the Virginia House of Delegates in 2015. He represents the 30th District, comprising Madison, Orange and part of Culpeper Counties. Freitas served in the Army Green Berets and served two tours in Iraq.  After his honorable discharge in 2009, he moved to Virginia and works as director of operations for a sevice disabled veteran owned company. Freitas is seeking the 2020 Republican nomination for the Seventh District congressioanl set held by Democrat Abigail Spanberger. He unsuccessfully sought the GOP nomination for the U.S. Senate in 2018. He is married to Tina Freitas, a local Republican activist and state senate candidate in 2019.