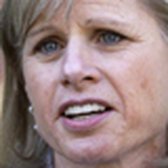 Burke is a former Trek Bicycle executive and former Wisconsin Commerce Department secretary who announced on Oct. 7, 2013 that she would seek the Democratic nomination for governor in Wisconsin in the fall 2014 election against incument Republican Gov. Scott Walker. She lost to Walker on Nov. 4, 2014. She is a school board member in Madison, Wisconsin.