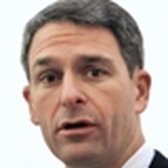 Ken Cuccinelli became acting director of U.S. Citizenship and Immigration Services on June 10, 2019. Cuccinelli, a Republican, was Virginia's attorney general from 2010 to 2014. In 2013, he lost the general election for governor to Democrat Terry McAuliffe. In 2016, he was a adisver to the presidential campaign of Sen. Ted Cruz, R-Texas. Born in 1968, Cuccinelli has a B.S. in mechanical engineering from the University of Virginia, a J.D. from Geroge Mason University School of Law and an M.A. in International Commerce and Policy from George Mason University. He represented Fairfax County in the state senate from 2002 to 2010.         .