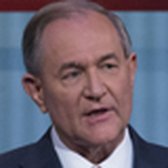 Jim Gilmore, a Republican, was governor of Virginia from 1998-2002. He is seeking the 2016 GOP presidential nomination. Gilmore was born in Richmond in 1949. His father was a grocery store meat cutter and his mother was a church secretary. Upon graduating from the University of Virginia in 1971, he enlisted in the Army for three years and served in the intelligence corps at NATO headquarters in Germany.  Gilmore graduated from UVa's law school in 1977 and was elected Commonwealth's Attorney in Henrico County in 1987 and 1991 and, in 1993, was elected state attorney general. Gilmore was elected governor in 1997, largely on a promise to repeal an unpopular local property tax on cars. He had succeeded in repealing 70 percent of the levy when the state entered in recession in 2001 and lawmakers refeused to continue phasing out the tax. Gilmore ran unsuccessfully for the U.S. Senate in 2008, losing to Democrat Mark Warner. In 2007, he launched a brief campaign for the 2008 GOP presidential nomination. In 2009, he became president and CEO of the Free Congress Foundation, a conservative think tank.