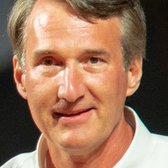 Republican Glenn Youngkin was elected Virginia's governor in November 2021. He defeated Democrat Terry McAuliffe, who was governor from 2014 to 2018. Youngkin was reared in Richmond and Virginia Beach and won a basketball scholarship at Rice University, where he earned an engineering degree. He earned a MBA from Harvard University. Youngkin worked 25 years at the Carlyle Group, a global private equity firm based in Washington with $230 billion in assets. He retired in 2020 as CEO after taking the company public. His net worth is estimated at $254 million, according to The Washington Post. Youngkin's 2021 campaign for governor is his first bid for public office.