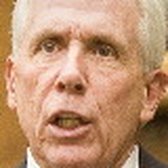 Frank Wolf, R-10th, has been a member of the U.S. House of Representatives since 1981. The 10th District stretches from McLean to Winchester. Wolf sits on the House Appropriations Committee, where he is the Chairman of the Commerce, Justice and Science subcommittee. In addition, he is the co-chairman of the Tom Lantos Human Rights Commission, a bipartisan organization made up of more than 200 members of Congress who work together to raise awareness about international human rights issues. Wolf announced in December 2013 that he would not run for re-election in 2014. Wolf served as a lawyer in the U.S. Army Reserves. He lost the first two congressional elections he ran in before winning in 1980. Wolf was born in 1939 in Philadelphia. He received his undergraduate degree from Penn State University in 1961 and his law degree from Georgetown University in 1965.