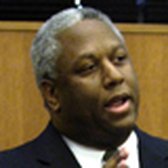 Donald McEachin, D-9th, has been a state senator since 2008.  He represents Charles City County and parts of Henrico County and Richmond. In 2011, he was named the Democratic Caucus chairman. McEachin, a lawyer in his own firm, McEachin Gee Law Firm, served in the House of Delegates from 1998 to 2002 and from 2006 to 2008. He ran unsuccessfully for attorney general in 2001. He earned a bachelor's degree in political history from The American University, Washington, D.C., in 1982. He also earned a law degree in 1986 from the University of Virginia and a master of divinity from Virginia Union University in 2008.