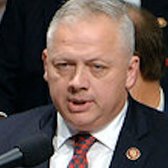 Denver Riggleman was elected to the U.S. House of Represenatives in 2018. He's a Republican representing the 5th Congressional District, spanning from Southside Virginia, throught Lynchburg up to Front Royal. Riggleman was born in Manassas, Va. in 1970. He has a B.A. in Foreign Affairs from the University of Virginia and is a former U.S. Air Force officer and contractor with the National Security Agency. In 2014, he opened a craft distillary.