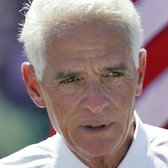 Charlie Crist lost the race for Florida governor as the Democratic candidate in 2022. He served as a U.S. congressman from St. Petersburg since 2017 and resigned Aug. 31, 2022 to focus on his campaign.  As a Republican, Crist served as governor from 2007 to 2011. Crist left the Republican Party in 2010 to mount a campaign for the U.S. Senate as an independent. Crist lost the race to Marco Rubio. In 2012, he endorsed President Barack Obama and announced that he had registered as a Democrat. He lost his race as a Democratic candidate for governor in 2014.