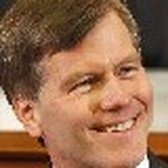 Bob McDonnell is the Republican governor of Virginia until January 2014. McDonnell was elected over Democratic state Sen. Creigh Deeds. McDonnell previously served in the Virginia House of Delegates from 1992 to 2006 and as state Attorney General from 2006 to 2009. McDonnell graduated from the University of Nortre Dame, Notre Dame, Ind., with a bachelor's degree in 1976. He then served in the U.S. Army on active duty from 1976 to 1981 and in the reserves until 1997, retiring as a lieutenant colenel. He received a master's degree in business adminsitration from Boston University in 1980 and a master's and law degree from Regent University, Virginia Beach, in 1989.