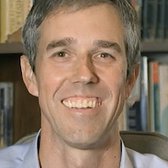 Beto O’Rourke is a former representative of Texas’s 16th Congressional District. He represented the district from 2013 until 2019, when he gave up his seat to run a senate campaign against incumbent Ted Cruz, which O’Rourke lost. He received a bachelor’s degree in English literature from Columbia University. In 2019, he ran for the Democratic nomination for president.