Ted Nugent
stated on September 20, 2022 in a Facebook post:
Michigan’s Proposal 2 “will permanently put in the Constitution that you never have to show an ID to vote ever again.”

Voters wait in line outside the municipal offices before polls close on Election Day in Shelby Township, Mich., in Macomb County, Nov. 3, 2020. (AP)

There are several elements to Proposal 2, a voting-focused ballot measure that Michigan voters will be asked to consider in the November midterm election. But one thing Proposal 2 won’t do? Abolish a voter identification requirement established by state lawmakers years ago.

But some Michiganders, including Ted Nugent, a politically conservative rock musician who has more than 3.5 million followers on Facebook, have shared misleading claims about the proposal on social media.

"For all of you Michiganders!!!!" Nugent wrote in a Sept. 20 post. "Instead of listening to the vast majority of Michiganders supporting common sense election reforms like requiring a photo ID to vote, the soulless left decided to put a Constitutional Amendment on our ballot this fall."

Nugent — who MLive reported is a member of the far-right Oath Keepers, a militia group with ties to the Jan. 6, 2021, attack on the U.S. Capitol — continued, claiming the proposal would threaten Michigan election security.

"What does Proposal 2 do?" Nugent asked. "It will permanently put in the Constitution that you NEVER have to show an ID to vote ever again."

That misrepresents what the proposal would do. Instead, it would enshrine Michigan’s current requirements to show voter identification into the state constitution.

If Proposal 2 passed, it would, among other things: require nine days of early in-person voting; require at least one ballot drop box per municipality or one per 15,000 voters in larger municipalities; allow municipalities to use publicly disclosed donations to help administer elections; and require state-funded postage for absentee ballots. 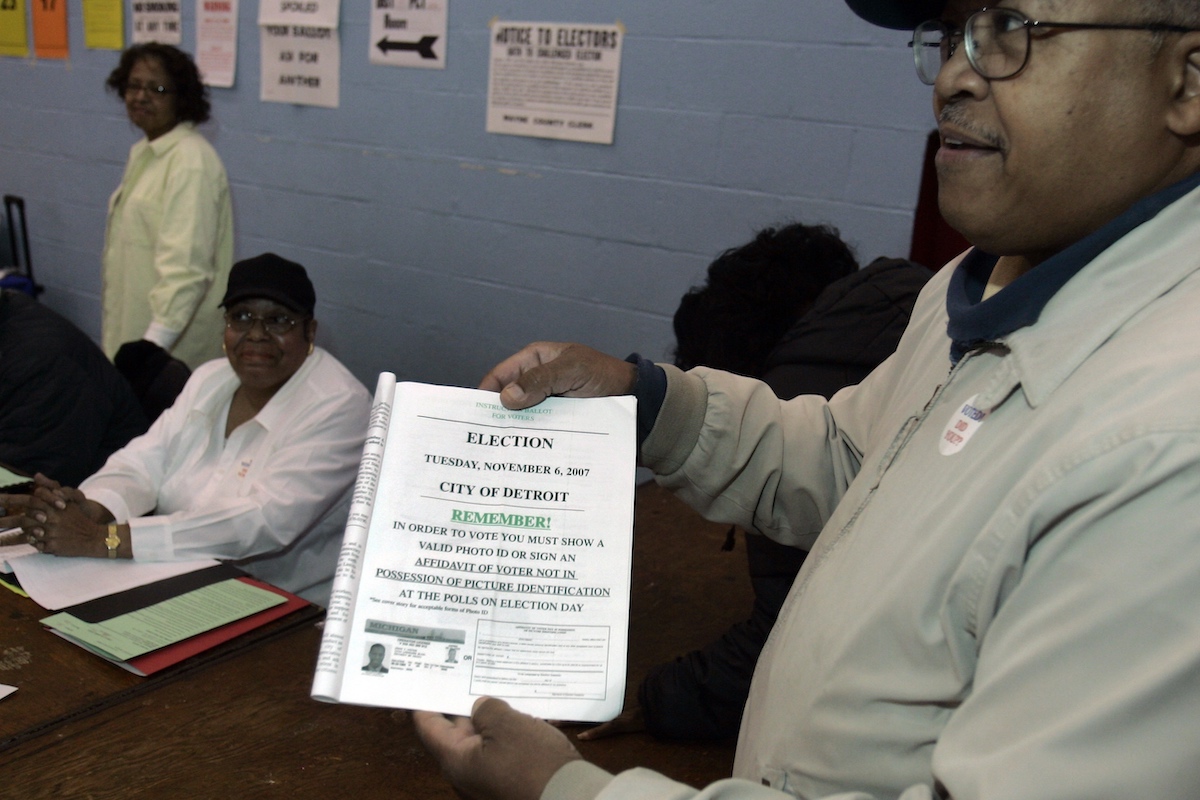 Tyrone Washington shows a mailer reminding voters they must present a valid photo ID to vote at the New St. Paul Tabernacle in Detroit, Nov. 6, 2007. Michigan voters were being asked to either show photo identification or sign a short affidavit for the first time. (AP)

Voters in Michigan have been required to show picture identification or sign an affidavit verifying their identity since 2007. An affidavit is a sworn written statement that asserts certain facts — in this case, that someone’s identification details are true, under penalty of perjury.

"After checking the ePollbook to verify that the voter is registered to vote in the precinct, ask the voter to show one of the forms of photo identification listed below to verify the voter’s identity," reads the state’s Election Officials’ Manual. "Be sure to ask all voters for picture ID."

The manual is clear:

If Proposal 2 passes, this procedure will not change.

The proposed constitutional changes are too long to put on the ballot in their entirety, so voters will find a summary of the proposal when casting their votes. The portion of that summary that addresses voter ID laws states that Proposal 2 would provide voters with the "right to verify identity with photo ID or signed statement."

That is in line with section 168.523 of Michigan election law, which states that "at each election, before being given a ballot, each registered elector offering to vote must identify himself or herself by presenting identification for election purposes."

If the registered voter has no acceptable ID, "the individual shall sign an affidavit to that effect before an election inspector and be allowed to vote," the law continues.

The proposal also would not change Michigan voter registration requirements.

In Michigan, people are automatically registered to vote when applying for or updating their license or state ID cards — unless they opt-out or are ineligible to vote.

People can also complete a voter registration application online, in person or mail a completed application to a designated election official, as long as it is more than 15 days before the election. The application asks people to verify that they are qualified to vote and to provide their Michigan-issued ID number or the last four digits of their social security number. If neither can be provided, the application asks a potential voter to include a copy of a valid photo ID from any state or a copy of a document that lists their name and address (e.g. utility bill, bank statement, etc.)

Within 14 days of an election, people can only register to vote in person and must provide a document that verifies their residency and includes their current address, such as a state ID, university document or utility bill. Voters can register on Election Day.

About 2.3 million people voted in person in Michigan’s election Nov. 3, 2020, and only 11,417 voted without showing an ID. That’s about 0.5% of in-person voters. The vast majority of people voting in person show their IDs.

But for the small number who do not, "current law provides safeguards for voters to verify their identity," Davis said. Proposal 2 ensures the current law "is permanent and won’t be subject to legislative changes in the future."

Michigan’s voter ID requirements are not as strict as some other states. But Republican state lawmakers have recently supported stricter voter identification requirements, in line with the national trend.

Jeff Litten, executive director of Secure MI Vote, a group advocating for stricter voter ID laws, opposes writing these existing measures into Michigan’s constitution. He said he believes using affidavits creates an opportunity for fraud in that someone might impersonate a voter.

But Michigan election law already makes that a felony punishable by up to four years in prison and up to a $2,000 fine.

Nugent claimed that Proposal 2 on Michigan voters’ ballots "will permanently put in the Constitution that you never have to show an ID to vote ever again."

Michigan voters have been required to show picture identification or sign a sworn affidavit verifying their identity since 2007. Poll workers ask to see photo IDs before giving voters their ballots, and the vast majority of Michigan voters show their IDs when voting. A tiny percentage of voters sign affidavits to cast their ballots.

If Proposal 2 passes, it will put these existing procedures into the state constitution. It won’t change existing voter ID requirements.

The statement contains an element of truth but ignores critical facts that would give a different impression. We rate this claim Mostly False.

PolitiFact, ‘Everything we trained for’: How the far-right Oath Keepers militia planned for violence on Jan. 6, Sept. 23, 2021

Michigan.gov, A guide to voter ID/affidavit at the polls, accessed Sept. 27, 2022

ProPublica, Everything you’ve ever wanted to know about voter ID laws, March 9, 2016