But just in time for spooky season, a popular Instagram post is reviving the long-debunked claim that they did.

"When you ask a historian why there are giant human caucasian skeletons in Ohio that predate any known civilizations," read words that hover over a video showing a person mumbling, "I don’t even know. Like, I couldn’t even tell you that."

The Sept 26 post was flagged as part of Facebook’s efforts to combat false news and misinformation on its News Feed. (Read more about our partnership with Meta, which owns Facebook and Instagram.) 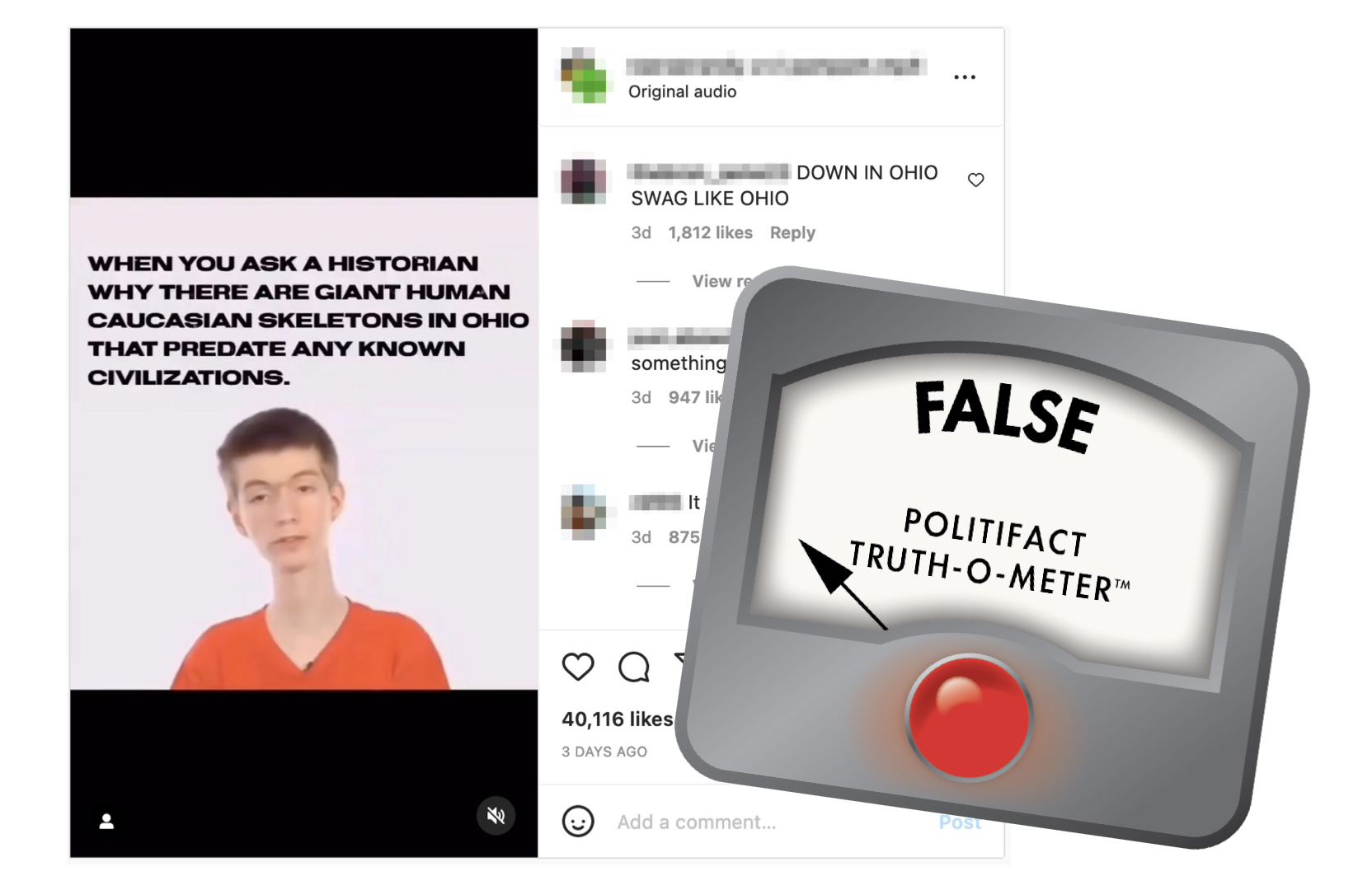 Unproven myths that giant human beings once lived in Ohio have circulated for nearly 200 years. Stories of discoveries of giant skeletons date back to at least 1845, The Columbus Dispatch reported.

These baseless claims that giant skeletons were discovered aren’t limited to Ohio, either. They’ve been said to have been found in India, Saudi Arabia and New York. In each case, fact-checkers have debunked the supposed discoveries.

Some of the claims were traced back to doctored images spread by social media users. One such image that features researchers unearthing what appears to be a massive human skeleton was a Photoshop contest entry, Reuters reported.

Another image held up as evidence of giants also resulted from Photoshop magic. The artist, a Canada-based illustrator who uses the name IronKite online, told National Geographic that he digitally superimposed a human skeleton over the remains of a mastodon that was excavated in Hyde Park, New York, in 2004.

Ohio-focused claims about giants appear to have a very particular origin, though.

Everhart claimed he’d recovered a sandstone slab inscribed with hieroglyphics and several skeletons each more than 8 feet tall, according to a Columbus Dispatch report.

His account later crumbled: A worker who once worked for Everhart testified in court that he’d been promised $15 to carve the "ancient" hieroglyphics into the slab. Similarly, a member of Everhart’s excavation crew acknowledged that "all the skeletons were so much crumbled that it was difficult to make accurate measurements," The Dispatch said.

An Instagram post said "there are giant human caucasian skeletons in Ohio that predate any known civilizations."

This claim traces back to decades-old myths and rumors — some of which stem from photo-editing contests. PolitiFact found no corroborated evidence suggesting that ancient, giant human skeletons were found in Ohio.

Correction, Oct. 3, 2022: This fact-check has been corrected to reflect that Brush Creek Mound in Muskingum County, Ohio, is a separate, distinct landmark from Serpent Mound in Adams County, Ohio. The rating is unchanged.

The Columbus Dispatch, Archaeology: Newspapers have been debunking giant hoaxes for a long time, Dec. 27, 2020