Instagram posts
stated on October 25, 2022 in an image shared on Instagram:
“It’s not that there is no evidence the election was stolen, but that no court had the guts to HEAR the evidence. They dismissed the cases, NOT the evidence.”

The Supreme Court, shown here Nov. 6, 2020, rejected on Dec. 11, 2020, a lawsuit backed by President Donald Trump to overturn Joe Biden’s election victory, ending an attempt to get cases rejected by state and federal judges before the Supreme Court. (AP)

Former President Donald Trump lost the presidential election to Joe Biden in November 2020. Unwilling to accept that defeat, the Trump campaign and its allies took their grievances to the courts — an ultimately unsuccessful effort to overturn the results.

Conservatives filed a flood of lawsuits alleging there was widespread fraud in the 2020 election that robbed Trump of victory. At nearly every turn, judges across the country rejected such lawsuits for a variety of reasons, including lack of sufficient evidence to support the claims of fraud.

Nearly two years later, some social media users continue to claim that the courts refused to even consider such evidence.

"It’s not that there is no evidence the election was stolen, but that no court had the guts to hear the evidence," read an image posted Oct. 25 on Instagram. "They dismissed the cases, not the evidence. They refused to look at it, because the price of getting involved was too high. This is how evil destroys a republic."

Election security officials — including those in Trump’s own administration — have said the 2020 election was secure. When fraud occurred it was isolated and did not change the results. There is no evidence of widespread fraud.

Many post-election lawsuits were thrown out for jurisdictional or procedural reasons, but several judges also noted that the allegations of fraud lacked proof. 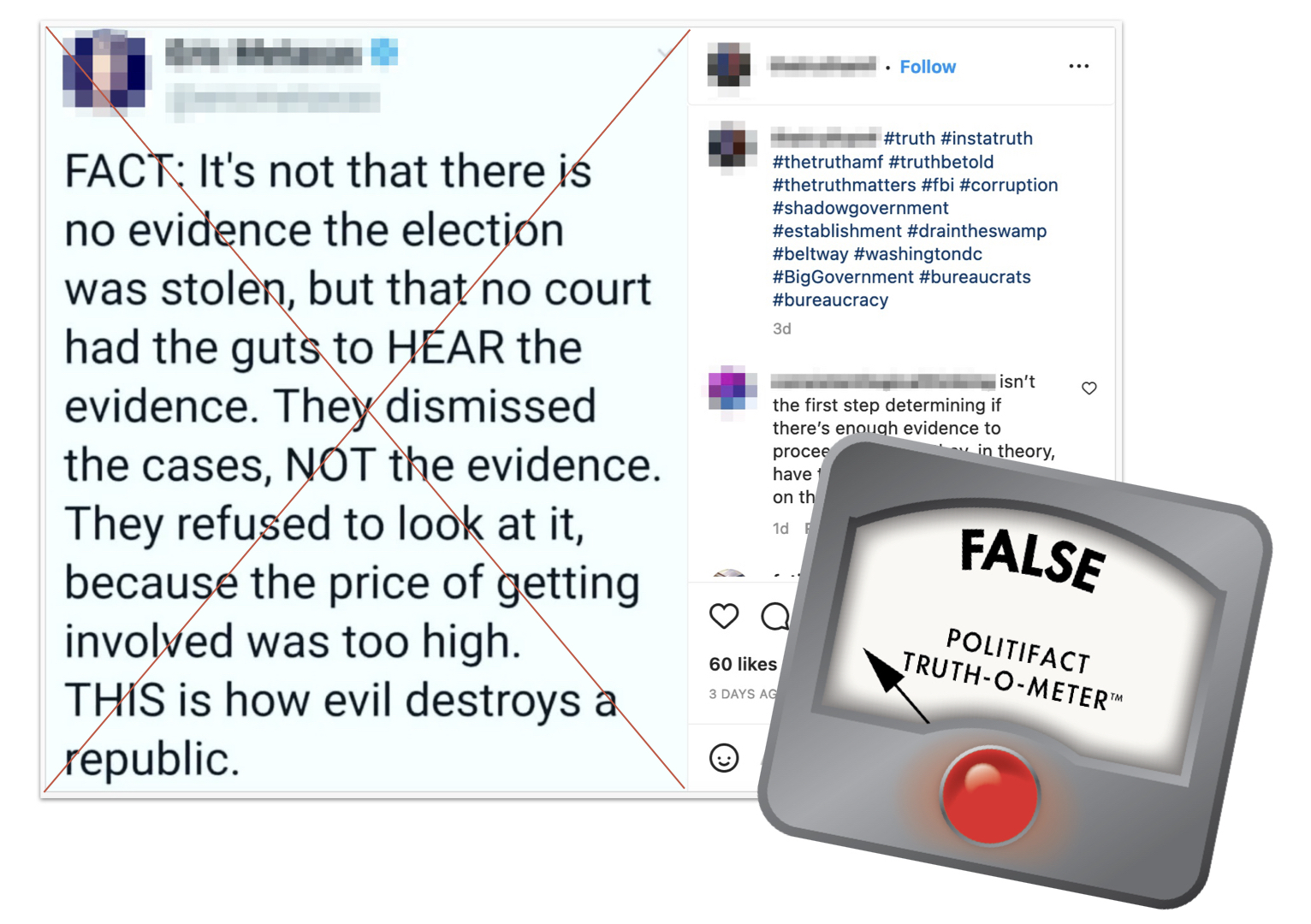 "Sometimes the law is that the person trying to bring a claim doesn’t have any legal right to do so, or that a claim that should have been brought before the election cannot be brought after the election, when everyone has voted already," Pildes said. "That’s not because courts lack the ‘courage’ to address these cases on the merits. It’s because courts are following the law about what constitutes a valid legal claim."

News reports and court documents show that some of the judges who dismissed Trump supporters’ post-election lawsuits considered what the plaintiffs presented as their evidence and still dismissed those challenges.

In a number of cases, the courts rejected claims "on the merits as well," Pildes said.

In Nevada, Trump supporters sued to challenge the state’s election results and seeking an order from the court declaring Trump the winner or declaring Biden’s victory "null and void."

Dismissing the lawsuit on Dec. 4, 2020, District Court James T. Russell wrote that the people behind it failed "to provide credible and relevant evidence" to contest the Nov. 3, 2020 election in accordance with Nevada laws.

Russell also noted that it reached its ruling "having considered, without limitation, all evidence submitted to the court."

In Pennsylvania, a federal appeals panel of three judges — each appointed by Republican presidents — rejected one of the Trump campaign’s election challenges Nov. 27, 2020.

"Charges of unfairness are serious," wrote Judge Stephanos Bibas, who was appointed by Trump. "But calling an election unfair does not make it so. Charges require specific allegations and then proof. We have neither here."

Later in the ruling, Bibas continued: "The campaign’s claims have no merit. The number of ballots it specifically challenges is far smaller than the roughly 81,000-vote margin of victory. And it never claims fraud or that any votes were cast by illegal voters." 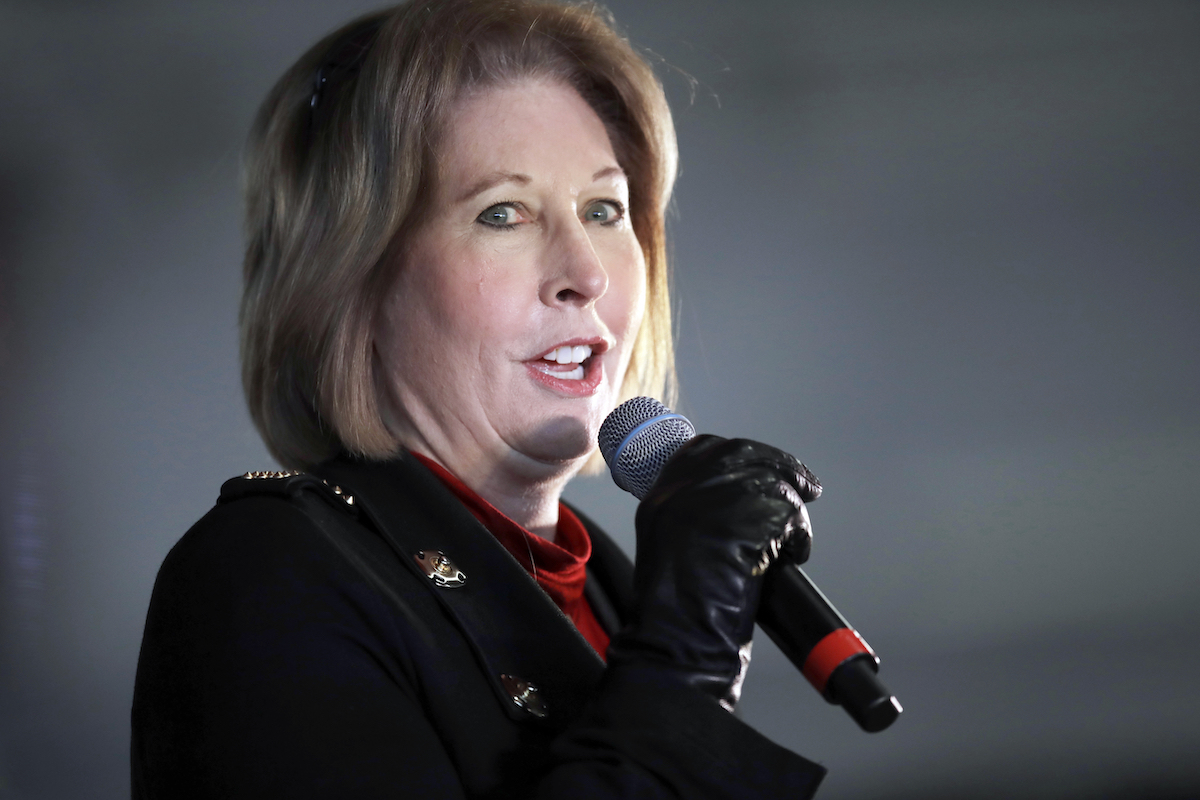 Attorney Sidney Powell speaks during a rally on Dec. 2, 2020, in Alpharetta, Ga. Powell and eight other lawyers allied with former President Donald Trump were ordered Dec. 2, 2021, to pay Detroit and Michigan $175,000 in sanctions for abusing the court system with a sham lawsuit challenging the 2020 election results. (AP)

A group of conservatives that included former U.S. senators, Republican lawyers and retired federal judges, examined 64 cases brought by Trump and his supporters and authored a report titled, "Lost, not stolen: The conservative case that Trump lost and Biden won the 2020 presidential election."

Trump and his supporters won only one Pennsylvania case "involving far too few votes to overturn the results," the group of conservatives wrote.

Trump and his supporters were given forums to prove their claims of fraud, the group concluded. And yet, "those efforts failed because of a lack of evidence and not because of erroneous rulings or unfair judges."

An Instagram post claimed: "It’s not that there is no evidence the election was stolen, but that no court had the guts to hear the evidence. They dismissed the cases, not the evidence."

Although a number of lawsuits challenging the 2020 election’s results were dismissed for procedural or jurisdictional reasons, it’s inaccurate to say that judges refused to review the evidence of alleged fraud. Court records show that some judges dismissed cases after reviewing the evidence and determining it did not sufficiently prove election fraud.

RELATED: Trump did not win two-thirds of election lawsuits ‘where merits considered’

PolitiFact, The facts of a fair US election have only gotten stronger since Capitol attack, Jan. 6, 2022

The Washington Post, ‘The last wall’: How dozens of judges across the political spectrum rejected Trump’s efforts to overturn the election, Dec. 12, 2020

Email exchange with Rebecca Green, a law professor at the College of William and Mary and co-director of the election law program, Oct. 27, 2022