Trump supporters clash with police and security forces outside the U.S. Capitol in Washington D.C on Jan. 6, 2021. (Photo by ROBERTO SCHMIDT / AFP)

The footage is a bit shaky. At times, the audio is unclear because of the clamor of movement and the chaos of voices speaking over one another.

Commotion aside, the video gives an unexpected look at legislators’ experience on Jan. 6, 2021. It shows House Speaker Nancy Pelosi, D-Calif., evacuating to a nearby U.S. Army base. It shows Pelosi and Sen. Chuck Schumer, D-N.Y., calling government leaders to request additional security and law enforcement personnel to secure the Capitol.

For many viewers, the clips highlighted congressional leaders’ confusion, fear and frustration as a mob of violent rioters stormed the U.S. Capitol. But some social media users claimed the footage revealed something more nefarious.

"Why were camera crews on standby ready to film Nancy Pelosi and Chuck Schumer during January 6th?" read text in a video shared on Instagram on Oct. 14. "The footage that was released yesterday looks like it was filmed by a movie production company. Lights, camera, action. So much phoniness on both sides. This was a setup and we all know it." 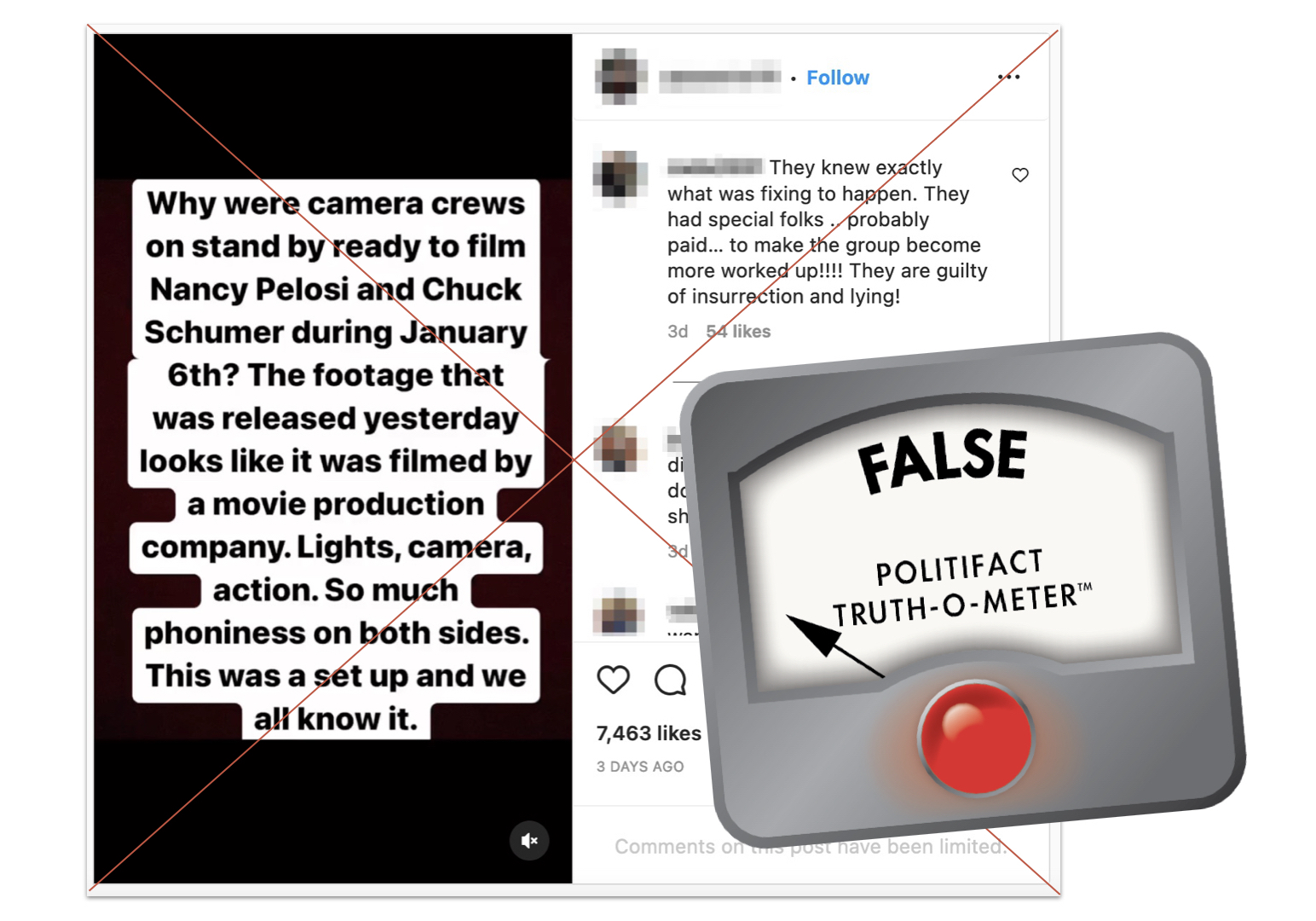 These video clips showing congressional leadership and staff evacuating to Fort McNair, a U.S. Army base near Washington, D.C., and attempting to coordinate a security response to the attack do not prove that the events on Jan. 6 were part of a setup.

A crowd of then-President Donald Trump’s supporters stormed the Capitol in an attempt to overturn the results of the 2020 election. There is no credible evidence that the attack was a setup. Falsehoods about the attack on the U.S. Capitol, including claims that it was a false flag, were named PolitiFact’s 2021 Lie of the Year. It was a real event with real consequences.

Who captured the footage?

The video was filmed by Nancy Pelosi’s daughter Alexandra Pelosi, a documentary filmmaker. It was given to the U.S. House select committee investigating the Jan. 6 attack, and some of the footage was played during the committee’s hearing on Oct. 13.

On Oct. 14, CNN obtained about an additional hour of video and published some segments.

"This first clip, which runs nearly 17 minutes, is part of a documentary that Alexandra Pelosi has been working on for years," said CNN anchor Anderson Cooper. "It’s edited, and we should warn you — you will hear no shortage of profanity. But this is the vantage point from Alexandra Pelosi in the speaker’s office, on the day of Jan. 6, and following events with her mom."

The Instagram post misleads by claiming a "camera crew" was on standby. Drew Hammill, a spokesperson for House Speaker Nancy Pelosi, said there wasn’t a crew that day.

It was just Alexandra Pelosi with a small, handheld camera that she always has with her, he said.

PolitiFact found no credible evidence that the attack was a setup or was contrived in some way.

Fuelled partly by the false belief that the presidential election had been stolen, hundreds of people — many clad in Trump-branded gear, others in helmets and combat gear — breached the U.S. Capitol on Jan. 6, 2021, aiming to stop the certification of the 2020 election results.

Rioters overturned barricades, broke windows and clashed with police. The attack forced lawmakers to evacuate, temporarily delaying the certification of President Joe Biden’s electoral victory. Federal prosecutors estimated that the attack caused about $1.5 million worth of damage to the Capitol building. 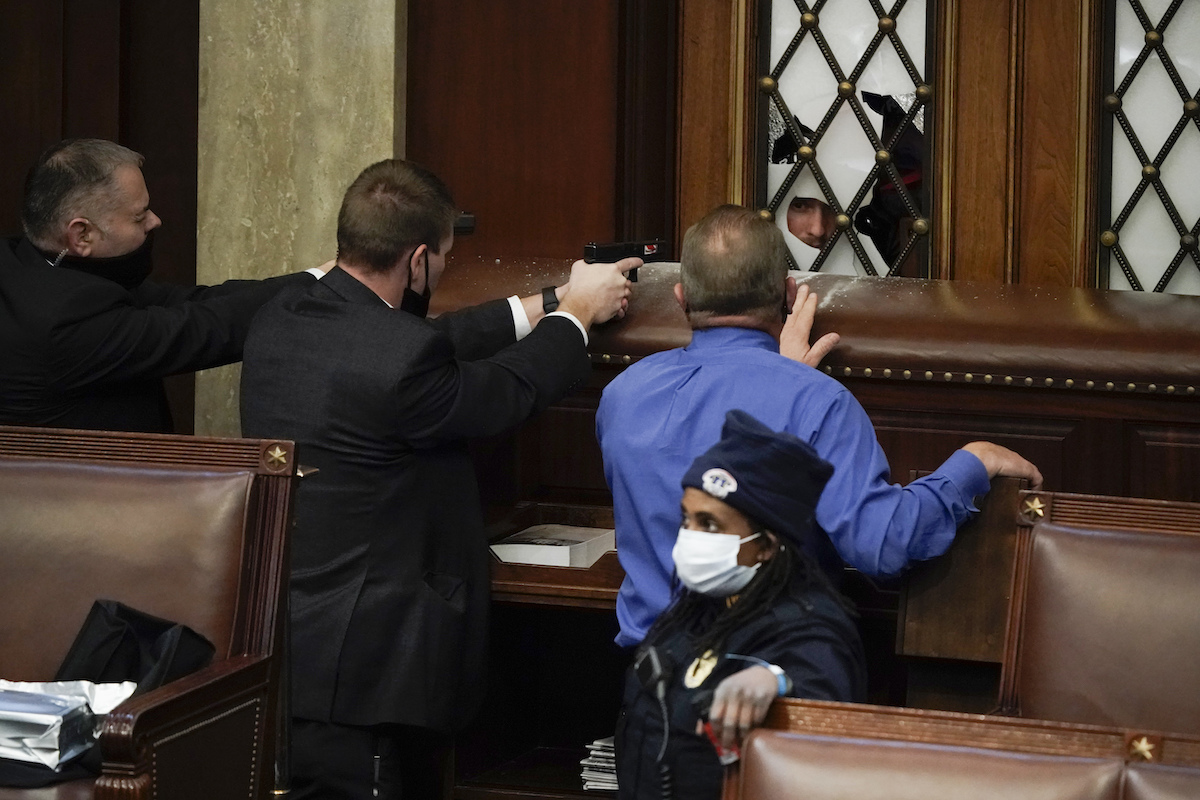 U.S. Capitol Police officers with guns drawn as rioters try to break into the House Chamber at the U.S. Capitol on Jan. 6. (AP)

In the months since, more than 880 people have been charged with crimes ranging from conspiracy to using a deadly or dangerous weapon or causing serious bodily injury to an officer. Of those, more than 400 people have pleaded guilty to one or more charges linked to the riot, and judges have sentenced nearly 290 people, according to an NPR analysis.

Since the attack, PolitiFact has checked dozens of claims about what happened Jan. 6. We’ve found no credible evidence that the riot was led by disguised antifa activists, that the attack was orchestrated by the FBI or that the breach was a "false flag" attack.

An Instagram post claimed that video footage of Schumer and Pelosi in hiding during the Jan. 6 attack and after evacuating the Capitol shows it "was a setup."

CNN, CNN Exclusive: New footage shows congressional leadership at Fort McNair on January 6, scrambling to save the US Capitol, Oct. 14, 2022

The New York Times, ‘Do You Believe This?’ Chilling Footage Shows Congressional Leaders on Jan. 6, Oct. 13, 2022

CNN, Congressional leaders are being evacuated from Capitol complex, Jan. 6, 2021

United States Department of Justice, 21 months since the Jan. 6 attack on the Capitol, accessed Oct. 17, 2022

NPR, The Capitol siege: The cases behind the biggest criminal investigation in U.S. history, accessed Oct. 17, 2022

The Washington Post, Inside the assault on the Capitol: Evacuating the Senate, Jan. 6, 2021