Instagram posts
stated on November 15, 2022 in a video:
President Joe Biden said, “I know you all know there’s no climate problem,” proving that people have been “lying for decades” about climate change.

President Joe Biden speaks about the CHIPS and Science Act, a measure intended to boost the semiconductor industry and scientific research, at communications company ViaSat, Nov. 4, 2022, in Carlsbad, Calif. (AP)

A video clip circulating on social media gives the misleading impression that President Joe Biden declared climate change a nonissue while speaking to a crowd at a California-based technology company.

Text superimposed over the footage, which was shared on Instagram Nov. 15, read, "Joe lets his inside voice out again," implying that Biden had admitted his true stance on the climate crisis.

"We’re making the biggest investment ever to deal with the climate crisis," Biden said in the video. "I know you all know there’s no climate problem. I know you know that."

The caption on the video said, "Yes we know ya'll have been lying for decades."

This post was flagged as part of Facebook’s efforts to combat false news and misinformation on its News Feed. (Read more about our partnership with Meta, which owns Facebook and Instagram.) The viral claim was also shared widely on Twitter. 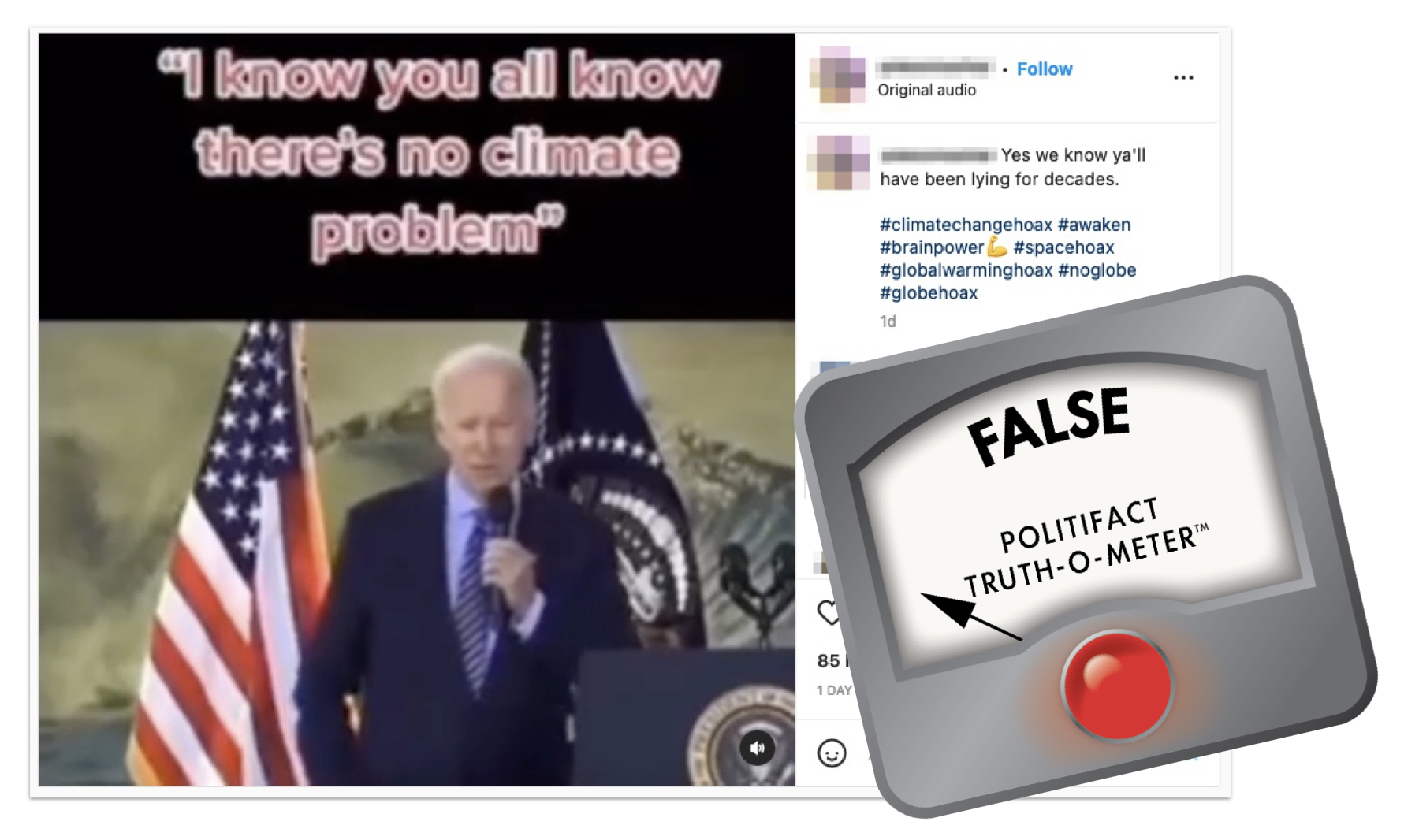 The video clip is real and unedited — but Biden was making a joke, and the 19-second clip shared on social media was cut off before that became clear.

Just before Nov. 8, Biden made stops in California to campaign for U.S. Rep. Mike Levin, a Democrat, who ultimately was re-elected. Biden’s Nov. 4 stop included a speech to local Democrats and employees of Viasat, a satellite internet provider and communications firm headquartered in Carlsbad.

During the speech, Biden focused on his administration’s economic achievements, including the bipartisan CHIPS and Science Act, which included nearly $40 billion in subsidies to encourage domestic semiconductor production. Viasat designs semiconductors for many products, including satellite internet gear and encryption devices for the U.S. government, The San Diego Union-Tribune reported.

Biden also touched on reining in the cost of insulin and his administration’s historic climate investments. When he switched to the topic of climate investments, Biden joked that climate change wasn’t a problem. A video of his speech captured the crowd laughing in response to his comment.

Biden did not seriously call into question the legitimacy of climate change.

His remarks were as follows:

"In addition, we’re making the biggest investment ever to deal with the climate crisis. I know you all know there’s no climate problem." Here, Biden paused, and people in the crowd laughed. "I know you know that. That’s why I spent a lot of time in Arizona, New Mexico, California, all through — flew up and down this state with your governor and those wildfires. I know they just happen."

He paused again and struck a more incredulous tone before continuing: "Come on. We finally got to the point where no one’s denying we have a climate problem. I was able to get not all I needed, but $369 billion put in that bill," a reference to the Democrats’ Inflation Reduction Act legislation.

An Instagram post claimed that Biden said, "I know you all know there’s no climate problem," proving that people have been "lying for decades" about climate change.

The 19-second video clip in the post removed the context so that it was not clear Biden was joking. The full clip shows the crowd laughing in response to his comment.

The White House, Remarks by President Biden on the CHIPS and Science Act, Nov. 4, 2022

The White House on YouTube, President Biden delivers remarks on the CHIPS and Science Act, Nov. 4, 2022

The San Diego Union-Tribune, Biden touts U.S. chip making at visit to Carlsbad's Viasat; President spoke at firm where about 10 percent of workforce are veterans, Nov. 5, 2022