Instagram posts
stated on November 11, 2022 in a video shared on Instagram:
It’s proof of “voter fraud” that it takes some states days to count 2 million votes while Florida results were available on election night.

Maricopa County Board of Supervisors Chairman Bill Gates answers a question regarding the vote count during a news conference at the Maricopa County Recorders Office in Phoenix, Thursday, Nov. 10, 2022. (AP)

Comparing how fast election returns roll in from one state to another doesn’t prove the existence of "voter fraud." But that didn’t stop a torrent of social media claims suggesting otherwise.

She was not alone in her claim. Similar posts singled out Arizona; others implicated Nevada.

The posts were flagged as part of Facebook’s efforts to combat false news and misinformation on its News Feed. (Read more about our partnership with Meta, which owns Facebook and Instagram.) 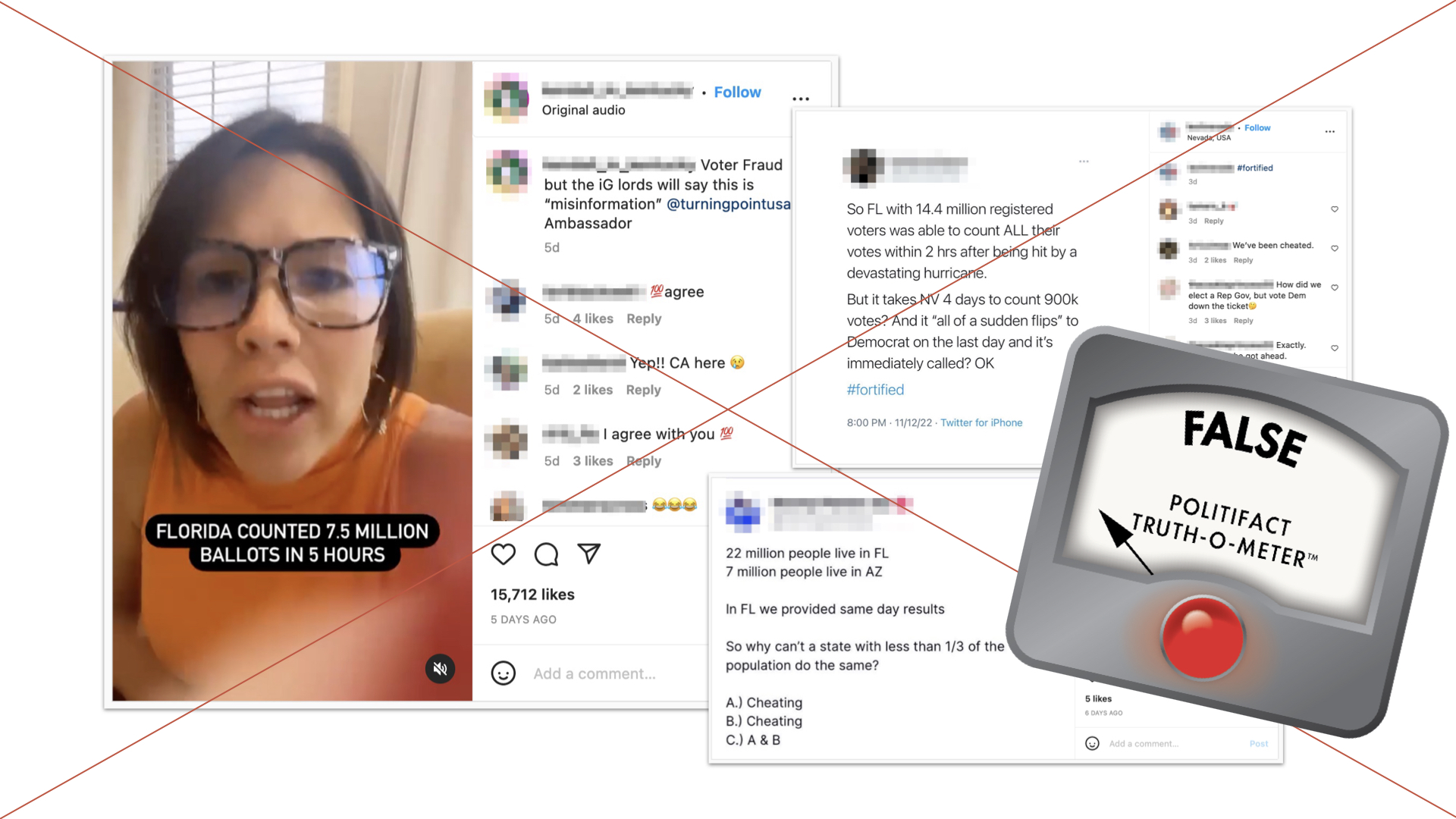 Florida results were available quickly for a number of reasons, including:

In other states, it takes longer to count the votes. But that doesn’t mean it’s suspicious.

In Arizona, about 2.5 million ballots were cast. In Nevada, there were about 1 million. Why does it take those states longer to count than a more populous state like Florida? Here’s what we know.

When races are close, media organizations wait until more votes have been counted to declare a projected winner.

States like Arizona and Nevada are battleground states that feature close races with narrow margins whose winners could ultimately decide party control of the U.S. Senate and House of Representatives.

Republicans won key races in Florida by large margins, so winners could be projected more quickly. Races in Arizona and Nevada had much narrower margins, and it took longer for media organizations to announce projected winners. 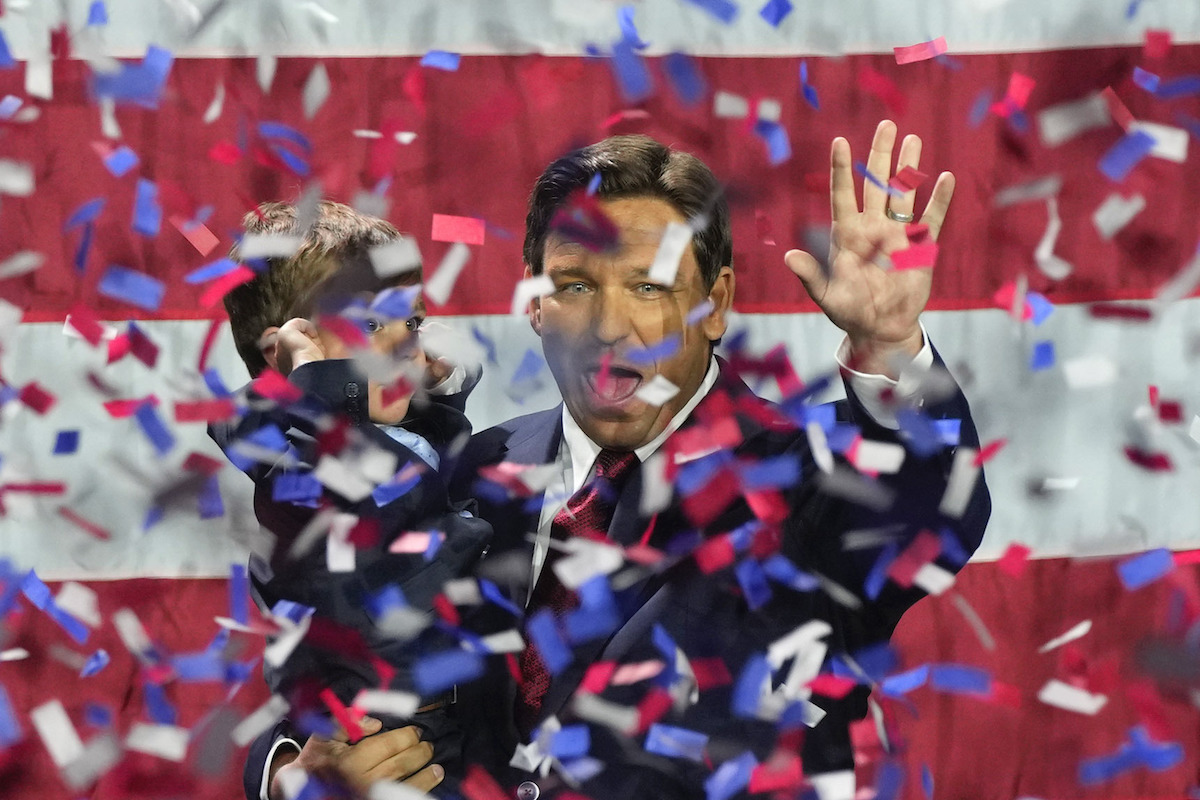 In Arizona, "we have so many close races that everyone is still paying attention to Maricopa County," said Maricopa County Board of Supervisors Chair Bill Gates, a Republican, on Nov. 10. "Those other states, like Florida — those races were blowouts," so no one was waiting and continuing to scrutinize those counts.

Arizona and Florida both require that ballots be received by 7 p.m. on Election Day. In Arizona, however, voters can drop off mail ballots at polling places on Election Day — a practice that is not permitted in Florida.

Most voters in Arizona cast mail ballots, and have done so for decades. About 290,000 ballots were dropped off at polling places in Maricopa County on Election Day — a figure Gates described as "historic." It takes more time to process those ballots.

In Florida, many counties use "extraction machines," which cut ballot envelopes open with a laser and then open the envelopes with air, making it easier to remove the ballot, NPR reported.

By comparison, in Arizona, people processing mail ballots must verify signatures on envelopes before a bipartisan team manually removes those ballots from the envelopes and prepares them to be counted. That increased the wait time for midterm results.

In Nevada, mail ballots postmarked by Election Day must be received by 5 p.m. on the fourth day after the election — this year that was Nov. 12. And Nevada election officials warned on Nov. 9 that they’d been flooded with mail-in ballots, The New York Times reported.

Nevada voters are also allowed six days after Election Day — compared with Florida’s two days — to resolve any issues with their mail ballots, such as a missing or mismatched signature. For this election, that deadline was Nov. 14.

The Nevada secretary of state’s office addressed the duration of the vote count in a Nov. 10 Facebook post, emphasizing that officials were following the deadlines set by state law.

"Nevada election officials have not stopped counting and will continue until everything is completed," read the post. "That includes working on the federal holiday, November 11, and all weekend."

Similarly, Arizona voters are allowed five business days to cure their ballots if there is a discrepancy with their signature.

"For folks who have followed Arizona politics for many years, this is very, very common," Gates said on Nov. 10. "I know people are very anxious to get the results, but there is nothing out of the ordinary here."

In Maricopa County, final results have been reported 10 to 12 days following Election Day.

"Election results take time, and it is not indicative of ‘voter fraud,’" said Sophia Solis, an Arizona secretary of state’s office spokesperson.

A woman in a video shared on Instagram claimed that it’s proof of "voter fraud" that election results in other states take longer than Florida, where unofficial results were available on election night.

Florida law allows for early processing of mail-in ballots and, in many counties, machines speed up the processing of those ballots. Key races in Florida were also won by larger margins than races in Arizona and Nevada, which made it easier to call them earlier.

A record number of mail ballots were dropped off on Election Day at polling places in Maricopa County, Arizona — a practice that is not allowed in Florida. Those ballots take more time to process. And in Arizona and Nevada, voters have more time than Floridians to resolve any discrepancies with their ballots.

The Washington Post, Why is Arizona still counting votes? Nov. 12, 2022

PolitiFact, Election result delays are not proof of fraud, Nov. 8, 2022

The Washington Post, Florida lurches to the right, crushing Democrats ahead of 2024, Nov. 9, 2022

PolitiFact, Voting by mail has been popular in Arizona for decades. Now the state GOP wants to ban it, Nov. 16, 2022