In late February, President Joe Biden met with a group of California business and government leaders to highlight new domestic efforts to mine lithium and other materials to help power electric cars and wind turbines.

But some social media users appear to have the news a little twisted.

"So Brandon wants to buy lithium from China for electric cars (that) we can’t afford to charge in stations that don’t exist in a grid that can’t handle it!! Are we really that stupid?" read a March 14 Facebook post that’s been shared on the platform over 14,000 times. The Brandon reference is part of a chant used to mock Biden.

The White House isn’t trying to buy more lithium from China for electric vehicles; it’s trying to buy less. Biden’s Feb. 22 meeting was about the U.S. trying to distance itself from purchasing foreign materials like lithium — particularly from China — by mining more domestically.

The White House did not respond to a request for comment. 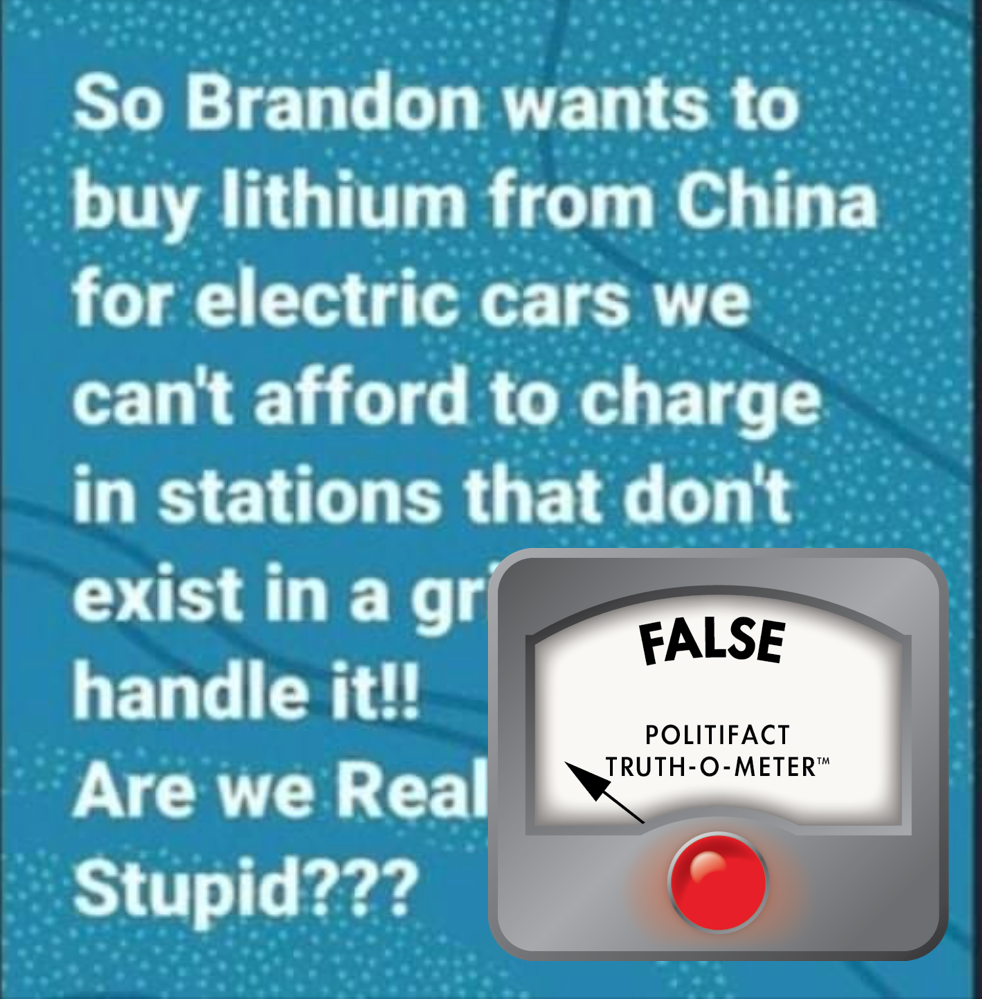 In the virtual meeting, the president announced several investments aimed at expanding domestic supply of lithium, cobalt and other materials that are used to make electric vehicles, computers, solar panels and wind turbines.

The U.S. currently gets many of these materials from China. According to the 2021 BP Statistical Review, China has 7.9% of the world’s lithium reserves. The U.S. has 4.0%. While the majority of reserves are in South America and Australia, China has become the third largest lithium producer in the world, spending over $60 billion over the past decade to build up the industry.

To shore up production at home, Biden announced that his administration is giving $35 million to American mining company MP Materials to expand a project in Mountain Pass, California. The money will strengthen MP’s ability to process rare earth materials domestically for U.S. manufacturing.

The initiative is part of an effort to make the U.S. less dependent on foreign products amid the supply chain disruptions that have helped fuel inflation. MP is expected to invest another $700 million in the supply chain by 2024.

"We can’t build a future that’s made in America if we ourselves are dependent on China for the materials that power the products of today and tomorrow," Biden said Feb. 22. "And this is not anti-China, or anti-anything else. It’s pro-America."

Biden also discussed efforts to extract lithium from around California’s Salton Sea and estimated that U.S. demand for the material will increase by 400% to 600% over the next several decades.

While the U.S. already buys foreign products like lithium from China, Biden’s recent announcement highlighted efforts to stop this and expand domestic mining of the material.

WhiteHouse.gov, Remarks by President Biden at a Virtual Event on Securing Critical Minerals for a Future Made in America, Feb. 22, 2022