House Republican Conference
stated on June 9, 2022 in a tweet:
“Bennie Thompson objected to the 2004 Presidential election.”

Chairman Bennie Thompson, D-Miss., speaks as the House select committee investigating the Jan. 6 attack on the U.S. Capitol holds its first public hearing to reveal the findings of a year-long investigation, on June 9, 2022. (AP)

• Thompson was one of 31 Democrats who voted to object to Ohio’s slate of electoral votes in 2005.

• However, this leaves out some important context. The 2005 objection was known by everyone at the time to be a procedural dead end, since the losing Democratic candidate, Sen. John Kerry, had conceded the election and had stated his opposition to the objection effort.

• By contrast, the loser in 2020, Donald Trump, was aggressively pursuing a campaign to overturn the election.

As the House Jan. 6 Committee was beginning its first prime-time hearing on June 9, the House Republican Conference sought to undercut the legitimacy of the panel and its chair, Rep. Bennie Thompson, D-Miss.

Thompson was a member of the House on Jan. 6, 2005, when a joint session of Congress met to formally count the electoral votes from the 2004 presidential race, in which the incumbent, George W. Bush, defeated his Democratic challenger, Sen. John Kerry of Massachusetts.

This is the same task that would be undertaken 16 years later to the day, when supporters of then-President Donald Trump stormed the Capitol and disrupted the certification of the election — the event that prompted the House select committee’s hearing.

The 2005 election was close; a shift of 118,601 votes in Ohio from Bush to Kerry would have flipped the state to Kerry and enabled the Democrat to win the Electoral College.

A Democratic House member from Ohio, Stephanie Tubbs Jones, offered an objection during the counting of the electoral vote. She was joined in the objection by a member of the Senate, Barbara Boxer, D-Calif., which is enough to trigger a formal vote by each chamber on whether the electoral votes in question were valid. This was the last time an objection vote was held prior to 2021. 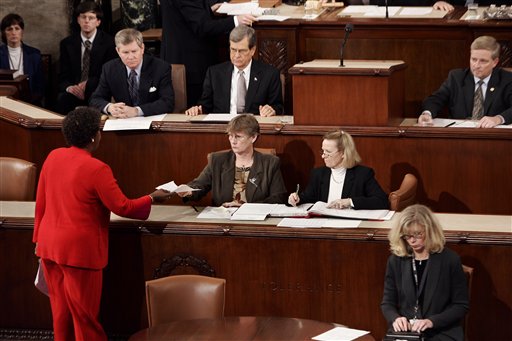 The motion to object said, "We, a member of the House of Representatives and a United States senator, object to the counting of the electoral votes of the State of Ohio on the ground that they were not, under all of the known circumstances, regularly given."

The critics behind the motion had cited a report by Democrats on the House Judiciary Committee that had found "numerous, serious election irregularities," particularly in Ohio, that led to "a significant disenfranchisement of voters."

"How can we possibly tell millions of Americans who registered to vote, who came to the polls in record numbers, particularly our young people ... to simply get over it and move on?" Tubbs Jones told reporters, CNN reported.

When the House cast its votes, the motion failed by a large margin: Only 31 Democrats voted to object, with 88 Democrats joining all 178 Republicans in opposing the motion.

Thompson was one of the 31 Democrats who voted to object, so on this point, the Republicans have a point.

But that’s not the end of the story.

One problem is that the wording of the Republicans’ tweet is a bit off-base. Officially, the 31 Democrats did not vote to object to the "2004 presidential election" but rather to object to the electoral votes of one state, Ohio.

A more important difference has to do with the context surrounding the vote.

The 2005 objection was essentially a protest opportunity. Some Democrats were frustrated: It was just four years after the weeks-long Florida recount of 2000, which had resulted in Bush becoming president despite Al Gore’s victory in the popular vote, the first time that had happened in more than a century. This, combined with Kerry’s narrow loss, led some Democrats to publicly vent their frustration with the Electoral College, using the counting of the electoral votes as a forum.

All parties in 2005 knew that this vote was moot. That’s because two days after the polls had closed in November, Kerry conceded the election to Bush, saying, "I spoke to President Bush and I offered him and Laura our congratulations on their victory. We had a good conversation, and we talked about the danger of division in our country and the need, the desperate need, for unity, for finding the common ground, coming together. Today I hope that we can begin the healing."

And not long before the counting of the electoral votes, Kerry made clear that he did not support an electoral-vote challenge. "Our legal teams on the ground have found no evidence that would change the outcome of the election," Kerry said in the letter.

The contrast with the weeks after the election of 2020 were stark. Trump never conceded his election loss. To the contrary, he aggressively pushed a legal battle to overturn the election, offered regular statements that claimed widespread voting fraud, and tried to convince his vice president, Mike Pence, to throw out slates of electoral votes. Pence refused. In the middle of the count of the electoral votes, rioters overran the Capitol building. They finished the job after the building was cleared.

The bottom line is that the possibility of an impact from electoral vote objections was real in 2021 in a way that it was not in 2005.

Thompson was one of 31 Democrats who voted to object to Ohio’s slate in 2005, when the electoral votes from the 2004 election were officially counted in a joint session of Congress.

That said, the 2005 objection had different implications, since Kerry had both conceded the election to Bush and had stated his opposition to the objection effort in Congress. By contrast, the loser in 2020, Trump, was aggressively pursuing a campaign to overturn the election, including by efforts to convince Pence to reject electoral vote slates. As a result, the objections in 2021 could have overturned the presidential election.

With that clarification, we rate the statement Mostly True.