President Joe Biden and German Chancellor Olaf Scholz during a news conference at the White House on Feb. 7, 2022. (AP)

• McEnany sets up a dubious dichotomy between what Trump and Biden have done to oppose the Nord Stream 2 natural gas pipeline. In reality, both presidents maneuvered with difficulty to oppose a project in which they had no official role and could only use indirect leverage.

• Trump did sanction Russia, although his friendliness to Putin sent contrary signals. Biden, for his part, continued and extended Trump’s sanctions, but he has also sought flexibility as part of diplomatic negotiations.

• It’s wrong to say that Biden “gave them a pipeline.” Only a tiny percentage of the pipeline remained to be finished by the time Biden took office; most of it was built on Trump’s watch.

The roughly 750-mile undersea pipeline would carry Russian natural gas to Germany, which is phasing out its use of coal and nuclear energy. The pipeline was completed in September 2021 but is not yet operational, pending German regulatory approval.

Many of Germany’s allies in the West, including the United States and the United Kingdom, expressed concerns about the pipeline’s construction when it was announced in 2015, warning that it could hand Russia geopolitical leverage over Germany and other European nations.

Those concerns have continued amid the current Russian troop buildup on Ukraine’s borders. The United States and members of the European Union have pressured German leaders to say they will block use of the pipeline if Russia invades.

The fight over Nord Stream 2 has spilled over into U.S. partisan politics. In a Feb. 8 Facebook post, Kayleigh McEnany, a former press secretary for then-President Donald Trump, applauded Trump’s efforts to block the pipeline while he was in office and accused his successor, President Joe Biden, of handing the pipeline over to Russia.

"President Trump sanctioned Russia. President Biden gave them a pipeline. And here we are," McEnany said in the post.

McEnany’s dichotomy is exaggerated, experts told PolitiFact. The first part of her statement has some validity but ignores that both presidents have sanctioned Russia, without stopping the project. The second part is flat wrong. 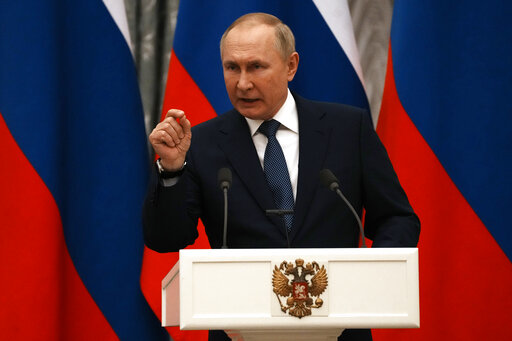 McEnany has a point that Trump did continue existing sanctions against Russia, in addition to imposing some new ones.

Trump continued many of the policies toward Russia that had begun under his predecessor, President Barack Obama, particularly after Russia annexed the Crimea region of Ukraine in 2014.

For instance, Trump kept in place the Magnitsky Act, which targeted high-ranking Russians with sanctions. His administration also put new sanctions on five Russians and Chechens over human rights abuses, and it approved lethal arms sales to Ukraine, which Obama had not.

Trump also signed a bill in August 2017 that targeted Russia’s energy and defense sectors with sanctions.

However, experts said the 2017 legislation passed with overwhelming bipartisan support in part due to widespread concerns that Trump was too cozy with Russia and Vladimir Putin.

"Trump’s early fawning of Putin sent strong signals that the U.S. would not be pursuing a tough policy towards Russia," said Susanne Wengle, a political scientist at the University of Notre Dame.

Congress felt it had to get involved because both parties feared Trump could not be trusted with Russia, and they didn’t want to leave him the unilateral power to end sanctions via executive order, said Yoshiko M. Herrera, a University Wisconsin-Madison political scientist.

When it came time to sign the bill, Trump did so grudgingly and called it "seriously flawed."

McEnany, through a spokesperson at Fox News, where she is a commentator, also pointed to a 2019 law signed by Trump authorizing new sanctions on Russia related to Nord Stream 2. The sanctions were imposed on any company helping Russia finish the pipeline construction.

These sanctions convinced a Swiss company involved in the construction to exit the project with about 6% of the pipeline unbuilt. A Russian company finished the remainder of the work in late 2020 and early 2021.

How do Biden’s Russia policies compare with Trump’s?

For the most part, Biden has continued the sanctions imposed by his predecessors and added new ones.

For instance, Biden issued an order in April 2021 that prohibited U.S. financial institutions from trading ruble-denominated bonds linked to a variety of Russian entities, and sanctioned six technology companies with links to Russian intelligence.

And in May 2021, the U.S. imposed new sanctions on Russian shipping and other entities involved in the pipeline project.

However, in the course of pursuing U.S. diplomatic goals, the Biden administration has sought some flexibility. In May 2021, for instance, the administration waived sanctions on the company spearheading Nord Stream 2 as well as its CEO, arguing that a waiver was in the U.S. national interest.

Secretary of State Antony Blinken cited Biden’s "pledge to rebuild relationships with our allies and partners in Europe," a position widely seen as an effort to nudge Germany to curtail the pipeline without alienating the United States’ longtime ally.

McEnany added that congressional Republicans have sought to stiffen sanctions related to Nord Stream 2 over the opposition of the Biden administration.

The issue came to a head in January 2022, when the Senate failed to reach the required 60 votes to advance legislation sponsored by Sen. Ted Cruz, R-Texas, that would have accelerated sanctions related to Nord Stream 2.

Cruz’s legislation was backed by every Senate Republican except for Rand Paul of Kentucky, and won the support of a half-dozen Democrats. But every other Democrat opposed it, following the lead of the administration, which argued that the bill would have complicated U.S. diplomacy. 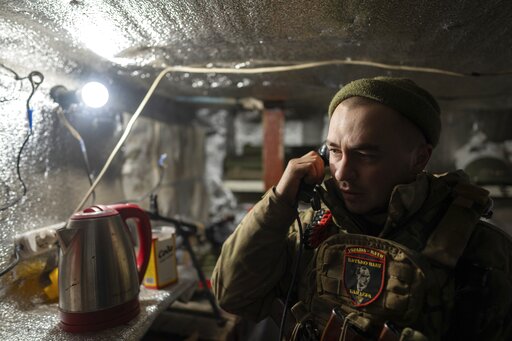 A Ukrainian serviceman reports to a commander via military intercom in a shelter at frontline positions near Zolote, Ukraine, on Feb. 7, 2022. (AP)

Biden couldn’t ‘give’ pipeline to Russia

Trump was president through January 2021, so the vast majority of its construction occurred while he was president. A tiny portion was completed on Biden’s watch.

It is "absolutely wrong to say that any president ‘gave’ Russia a pipeline," Wengle said.

Nord Stream 2 is a bilateral project between Germany and Russia, so the U.S. can only stop it using indirect leverage.

"It has been mainly Germany’s decision, so I don’t see how one can interpret Nord Stream 2 as a gift from Biden," Herrera said. "All we can do is pressure Germany to not allow it to become operational."

Trump’s ambassador to Germany, Richard Grenell, urged Germany to stop construction of Nord Stream 2, but his urging went unheeded. It didn’t help that Trump had frayed relations with Germany and the rest of Europe, leaving the U.S. with "virtually no leverage," Wengle said.

Biden prioritized improving relations with Germany but has faced obstacles in convincing Germany to forgo the pipeline, said Harley Balzer, an emeritus professor of government and foreign service at Georgetown University.

The administration might be making some headway. Biden met with German Chancellor Olaf Scholz in Washington on Feb. 7 and said Germany was committed to "acting together" and taking "necessary steps." This was considered the strongest statement about what Germany might do with Nord Stream 2 if Russia invades.

This sets up a dubious dichotomy between what Trump and Biden have done to oppose the pipeline. Both presidents maneuvered with difficulty to oppose a project in which they had no official role and could only use indirect leverage.

Trump did sanction Russia, although his friendliness to Putin sent contrary signals. Biden continued and extended sanctions, but he has also sought flexibility with sanctions as part of diplomatic negotiations.

Only a tiny percentage of the pipeline remained to be finished by the time Biden took office; most of it was built on Trump’s watch.

Fortune, "Trump has long wanted to kill a Russia-Germany natural gas pipeline. Navalny’s poisoning could do it for him," Sept. 8, 2020