Tweets
stated on April 7, 2022 in a tweet:
Sen. Marsha Blackburn made a white power symbol at Ketanji Brown Jackson.

In the days since, an image of Blackburn in which her hand is resting on her arm with her thumb and index finger touching has been shared on social media with the claim that she was flashing a hate symbol at Jackson.

"Marsha Blackburn decided to throw some painfully obvious white power signs during Ketanji Brown Jackson’s confirmation. I hope it goes viral so the press is forced to question her," one April 7 tweet says. 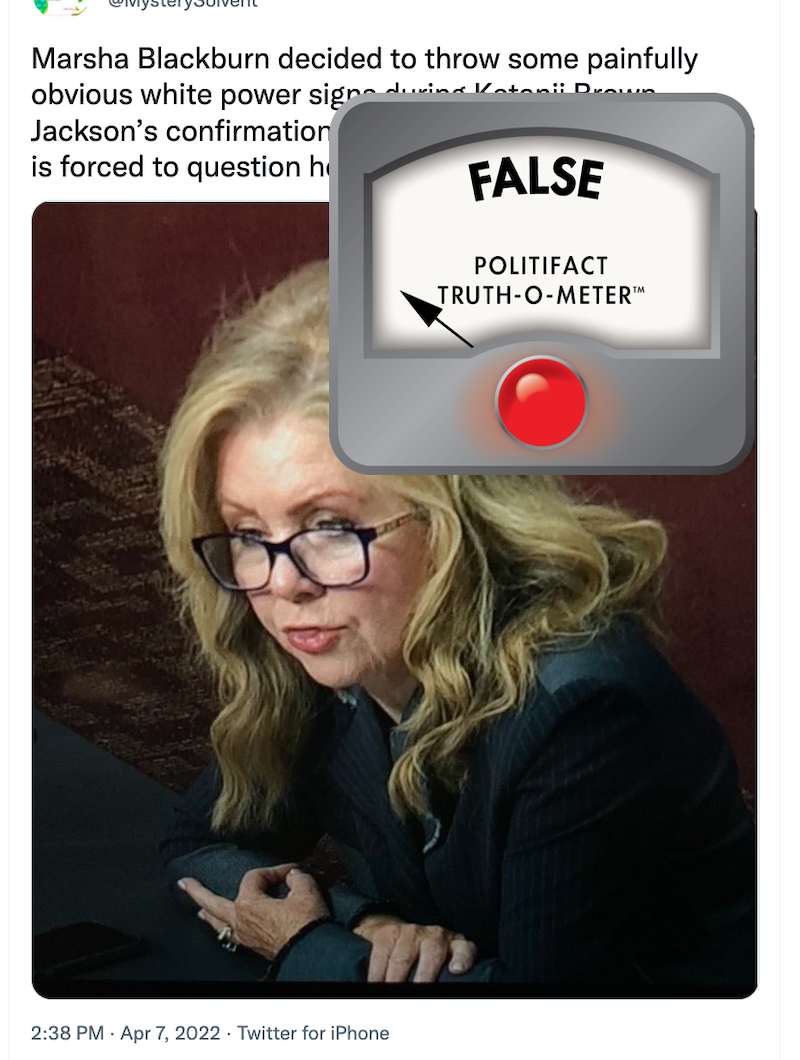 (Screenshot from Twitter)
But video of the hearing shows that Blackburn was wearing a different outfit than the one she was wearing in the image that shows her hand poised like that — a gesture that traditionally means "OK" but that has in recent years been associated with white supremacy.
In fact, Blackburn tweeted out the video in which she makes the gesture on April 7. You can see it around the 1:28 mark, as Defense Secretary Lloyd Austin finishes speaking and Blackburn directs a question at Gen. Mark Milley, chairman of the joint chiefs of staff.
"Top Biden defense officials just admitted that it was wrong of the administration to share intelligence about Russia with the Chinese," she said in the tweet. "You’d think they would have figured that out ahead of time."
Later in the video she can be seen tapping her hand lightly against her arms, and moving her index fingers as she speaks. At other times, her hands are folded. It doesn’t look like she’s deliberately making a hate symbol, and we found no evidence to support the claim that she was.
We’ve previously debunked claims that President Joe Biden, who made a similar gesture, "flashed the white power sign while a Black man was asking him a question." The man was white, and Biden was making a "zero" with his hand.
RELATED VIDEO

It’s also worth noting that this gesture is not now a universal white power gesture. According to the Anti-Defamation League, in 2017, members of the website 4chan falsely claimed that it represented the letters "WP" for "white power."

"The hoaxers hoped that the media and liberals would overreact by condemning a common image as white supremacist," the Anti-Defamation League said in this article explaining the gesture. While overwhelmingly people use the gesture to signify assent or approval, "as well as other usages unrelated to white supremacy," the league says, it has also been used as a sincere expression of white supremacy.

What’s not true: that Blackburn made a white power gesture at Jackson.

We rate that claim False.

PolitiFact, No, Biden didn’t flash a white power sign at a Black man during CNN’s town hall in Baltimore, Oct. 22, 2021

Viral image
stated on January 30, 2023 an Instagram post:
The government caused a fire at Hillandale Farms in Connecticut “so that they can force us into eating their fake GMO meats, or starve us into compliance.”

Viral image
stated on January 27, 2023 a Rumble post:
“Biden smirks while saying he has added more to the debt than any president before him.”