The Oceti Sakowin camp where people gathered to protest the Dakota Access pipeline is seen near Cannon Ball, N.D. on Nov. 29, 2016. (AP)

More than five years after the fact, some social media users are circulating claims that hundreds of people who spent months protesting the construction of the Dakota Access pipeline were attacked with harmful chemicals.

One such Facebook post, which was first shared in March 2020, was still generating buzz online as recently as April 8.

"If you were in Standing Rock the months of Oct to Nov 2016, you were intentionally poisoned by the Governor of North Dakota Jack Dalrymple, Kyle Kirchmeier of Morton County Sheriffs Department and the pilot who knowingly sprayed poisonous chemicals over the Standing Rock Oceti Sakowin and Sacred Stone Camps," it read.

The post went on to claim that the Morton County Sheriff’s Department "directed a secret operation" that used agricultural aircraft to spray "an aerosol called Chlorophacinone, also known as ROZOL" on protesters each night for nearly seven weeks.

The Standing Rock protests against the Dakota Access pipeline were not without violent conflict, but there is no evidence to suggest that protesters were sprayed with poisonous chemicals.

From around April 2016 through February 2017, thousands of people gathered near the Standing Rock Sioux Tribe’s reservation in North Dakota to protest the construction of a 1,172-mile crude oil pipeline, known as the Dakota Access pipeline. At the same time, the tribe waged a legal battle in an effort to block the pipeline — arguing that the project was a threat to native lands and could contaminate their water supply.

Protesters were pepper sprayed, tear gassed, struck with rubber bullets, hosed with water in below-freezing temperatures and attacked by security dogs. Some complained of what they characterized as a mysterious plane flying overhead during the protests.

But government officials and people involved in the demonstrations have both refuted claims that planes sprayed protesters with harmful chemicals.

Rozol, an anticoagulant poison that causes animals to bleed to death, is often used to kill prairie dogs by putting pellets into their burrows. It is a restricted-use pesticide, so only certified pesticide applicators in some states can use it.

Rumors that Rozol was used on protesters arose after an Environmental Protection Agency investigation found that in 2016, a private rancher had illegally used 40,000 pounds of Rozol poison to attempt to kill black-tailed prairie dogs near the Standing Rock Sioux Reservation, where the protests occurred. The Bismarck Tribune reported that instead of being put into burrows, Rozol pellets were "broadcast on the ground," and dead prairie dogs were left unmoved, endangering other wildlife.

Researchers from United Tribes Technical College studied the incident. Referring to the protesters as "campers," they wrote that, as colder winter temperatures set in, "widespread respiratory illnesses among some campers became prevalent." Though rumors emerged that Rozol was responsible for the illness that protesters started calling "DAPL cough," there was no conclusive evidence of a connection.

"Although there are statements posted online that some campers have had medical tests that showed Rozol exposure or analyses of their tents that showed Rozol residue, those test results have not been confirmed or are not reliably available, and so the true nature of the illness is still not clear," researchers wrote.

The researchers also noted that it was possible some of the protesters’ camp sites were set up on land where the Rozol had been illegally distributed. At least one of the protesters’ camps was set up on Cannonball Ranch land, according to a Seattle Times report. The Rozol was illegally distributed across more than 5,400 acres of land, some of which was part of the Cannonball Ranch.

However, North Dakota officials refuted claims that Rozol was responsible for "DAPL Cough" symptoms. The government’s ND Response website attributed the symptoms to the protesters’ living conditions, which included tents and other non-insulated structures in temperatures that often go below zero. 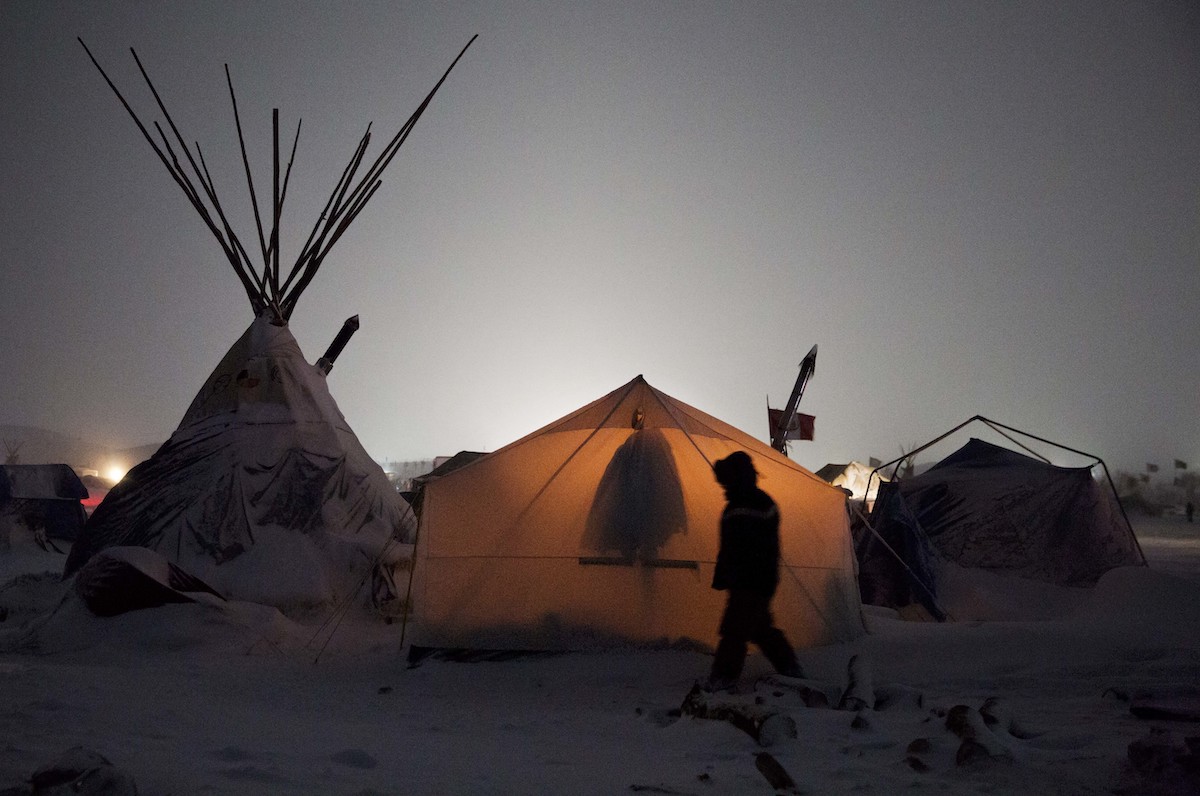 A light inside a tent glows as a person walks by at the Oceti Sakowin camp where people have gathered to protest the Dakota Access oil pipeline in Cannon Ball, N.D. on Nov. 29, 2016. (AP)​

ND Response wrote that common temporary forms of heat "have been known to cause lung, nose, and eye irritation." The statement concluded: "An ongoing cough is not consistent with Rozol exposure."

Dallas Goldtooth is a spokesperson for the Indigenous Environmental Network, one of the organizations involved in the protests, and was often quoted during national coverage of the demonstrations. He called the claims "wild rumors" in a December 2016 Facebook post.

"No we are not being sprayed with chemicals," he wrote.

ND Response also addressed claims that crop duster planes had sprayed protesters with chemicals, saying the state had "routinely conducted aerial surveillance of the camps" in an effort to assess the number of people present, which would be important to ensure protesters' safety if a mass evacuation were required.

A post claimed Dakota Access pipeline protesters were "intentionally poisoned" by government officials in North Dakota when a pilot "knowingly sprayed poisonous chemicals" over their camps.

We found no evidence to suggest planes dropped a poisonous chemical on people protesting the Dakota Access pipeline. People involved in the protests and state officials have refuted this claim.

Associated Press, "Hundreds of buffalo quarantined because of poison," Jan. 23, 2017

KVRR, "​​Illegal Use of Poison Puts Hundreds of Bison Under Quarantine in the Dakotas," Jan. 23, 2017

The Seattle Times, "Live updates from Dakota Access Pipeline protests: ‘It will be a battle here,’" Oct. 26, 2016

Greg Abbott
stated on May 12, 2022 a press release:
Says the Biden administration is choosing to send baby formula to the border as one of its “out-of-touch priorities.”

Jeffrey Toobin
stated on May 2, 2022 an interview on CNN:
“There has never been a leak anything like this” draft of a Supreme Court opinion that would overturn Roe v. Wade. “There’s never been a leak of a vote — much less an actual opinion, much less in a case of this significance.”

Facebook posts
stated on April 18, 2022 a Facebook post:
“The Red Cross sells your donated blood to hospitals for $150 and then that hospital charges you thousands for a blood transfusion.”