• The post is correct on Texas’ rankings for women’s health insurance and for school spending, and it’s close on child hunger.

• But the other claims are incorrect or unsupported by current data.

The Texas law outlaws abortions after about six weeks of pregnancy, which is before many women may even know they’re pregnant, and makes no exceptions for rape or incest. Advocates of abortion rights had hoped the Supreme Court would prevent the the law from taking effect, saying it violated the 1973 Roe v. Wade decision. Opponents of abortion, meanwhile, hope that the justices’ initial decision not to block the Texas law could portend the overturning of Roe v. Wade in its entirety.

One post by the liberal group Occupy Democrats accused Texas of providing little support for babies once they’re born.

The post said, "Let’s get this straight: (Texas is) a state that criminalizes abortion but ranks 50th in baby wellness checks, ranks 50th in clinical care for infants, ranks 50th in uninsured women, ranks 43rd in maternal mortality, ranks 44th in school funding per child, and ranks 46th in child hunger. … doesn’t give a damn about children."

Does Texas rank that low among states on all six of these measurements?

We found that the post was correct on two of the measures, and close on another, but was wrong or unsupported by current data on the other three. After our inquiries, Occupy Democrats changed its post to reflect our analysis.

Texas ranked 34th among the states in the percentage of children up to age 2 who had one or more preventive doctor visits during the previous 12 months, according to the National Survey of Children's Health, conducted by the Department of Health and Human Services’ Maternal and Child Health Bureau in 2016 and 2017.

Rafael Rivero, a co-founder of Occupy Democrats, told PolitiFact that he may have intended to cite adolescent wellness checks. By that measure, Texas ranks 48th, above only South Dakota and Alaska.

We couldn’t find an exact metric for this, but Occupy Democrats cited a collection of rankings by the UnitedHealth Foundation, which included several metrics under the general heading "clinical care-infants."

One of those metrics is for prenatal care, not clinical care for infants, and looks at the percentage of live births in which the mother began prenatal care between the first and sixth month of pregnancy, based on data from the Centers for Disease Control and Prevention.

Texas was near the bottom, ranking 49th; only New Mexico was lower.

While prenatal care is important for the health of mothers and newborns, the ranking doesn’t support the claim about clinical care for infants.

In 2019, Texas ranked dead last in health insurance coverage for women between the ages of 19 and 64, according to the Kaiser Family Foundation. (Medicare kicks in at 65, so women over that age are all covered.)

All told, 23% of women in Texas are uninsured, about double the national rate.

43rd in maternal mortality: That’s based on old data

The most recent data we could find from the CDC, covering 2018, had Texas ranking 12th among the 25 states for which data was available. Texas’ rate was better than the rates in Alabama, Arizona, Arkansas, Georgia, Indiana, Kentucky, Louisiana, New Jersey, New York, Oklahoma, South Carolina and Tennessee.

Rivero pointed to a ranking that showed Texas at 43rd, but it was based on a USA Today analysis that used earlier data, from 2012 to 2016.

In Texas, 13.1% of households had either "low" or "very low" food security, averaged for the years of 2017, 2018, and 2019. That was tied for 40th with North Carolina. The states that ranked below Texas were Alabama, Arkansas, Kentucky, Louisiana, Mississippi, New Mexico, Oklahoma and West Virginia.

As a postscript, Occupy Democrats changed its post to reflect our reporting. (PolitiFact’s policy is to rate the original statement but to include in our article any subsequent corrections or explanations by the speaker.) Here’s a screenshot of the revised post: 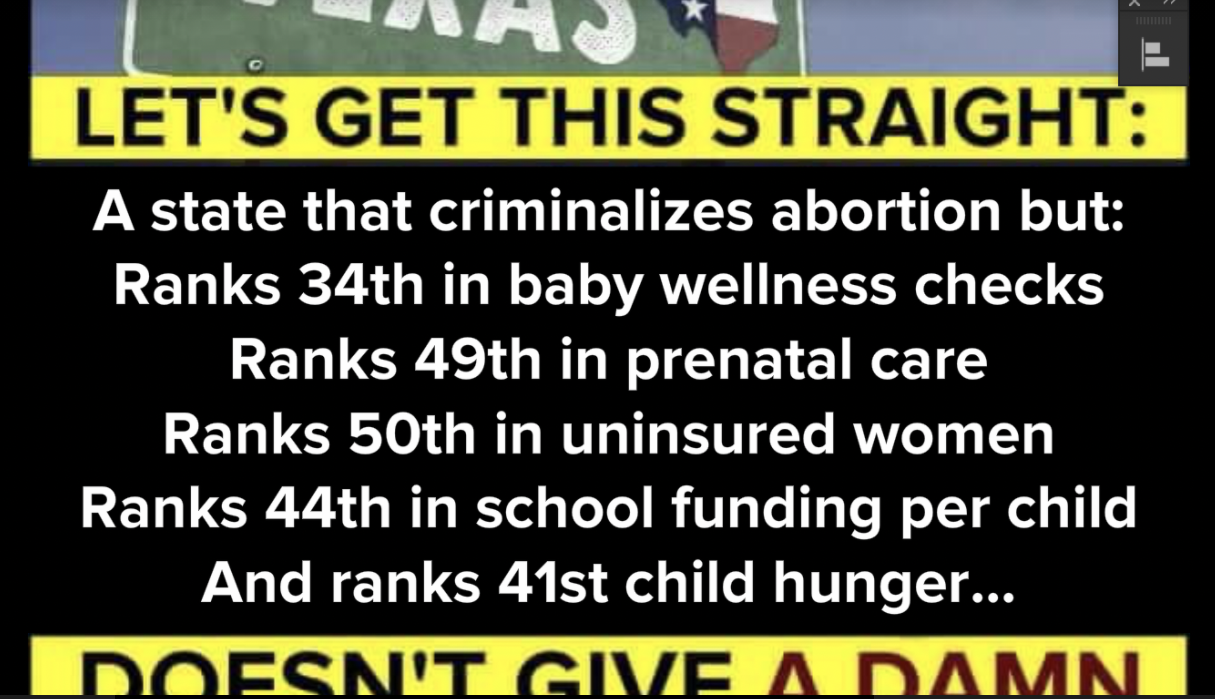 The post was correct about the women’s health insurance rankings and school spending, and it was close for child hunger. However, the most recent data shows that Texas is closer to the middle than to the bottom for baby wellness checks and maternal mortality. And a claim about clinical care for infants was unsupported.