Richard Hudson
stated on March 15, 2021 in a tweet:
"Illegal border crossings are up 173% from 1 year ago and 28% since January when President Biden stopped the wall & deportations and started catch & release."

A North Carolina congressman says the number of crossings at the U.S.-Mexico border has doubled and that President Biden’s policies are to blame.

"The reason we’re having this Biden border surge is because he’s reversed these policies, as you say. He stopped building the wall. He put a halt on deportations and he brought back catch and release," he said. 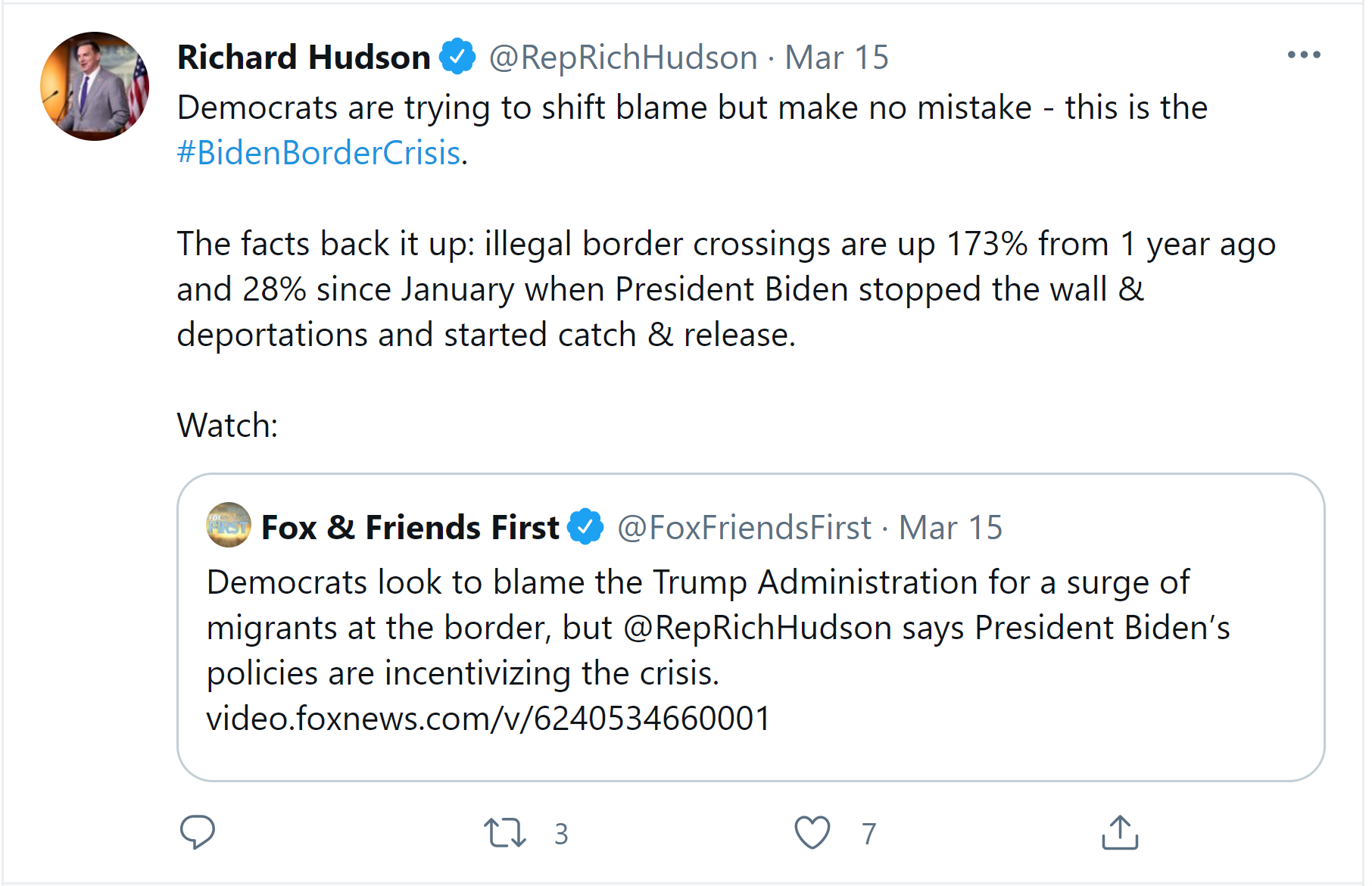 "Democrats are trying to shift blame but make no mistake - this is the #BidenBorderCrisis. The facts back it up: illegal border crossings are up 173% from 1 year ago and 28% since January when President Biden stopped the wall & deportations and started catch & release," he said.

While Hudson’s stats aren’t exactly right, he has a point about illegal border crossing numbers increasing significantly since last year and even since January. As for what’s causing the situation at the border, experts say his description is off.

Border crossing numbers are available at the U.S. Customs and Border Protection’s website. 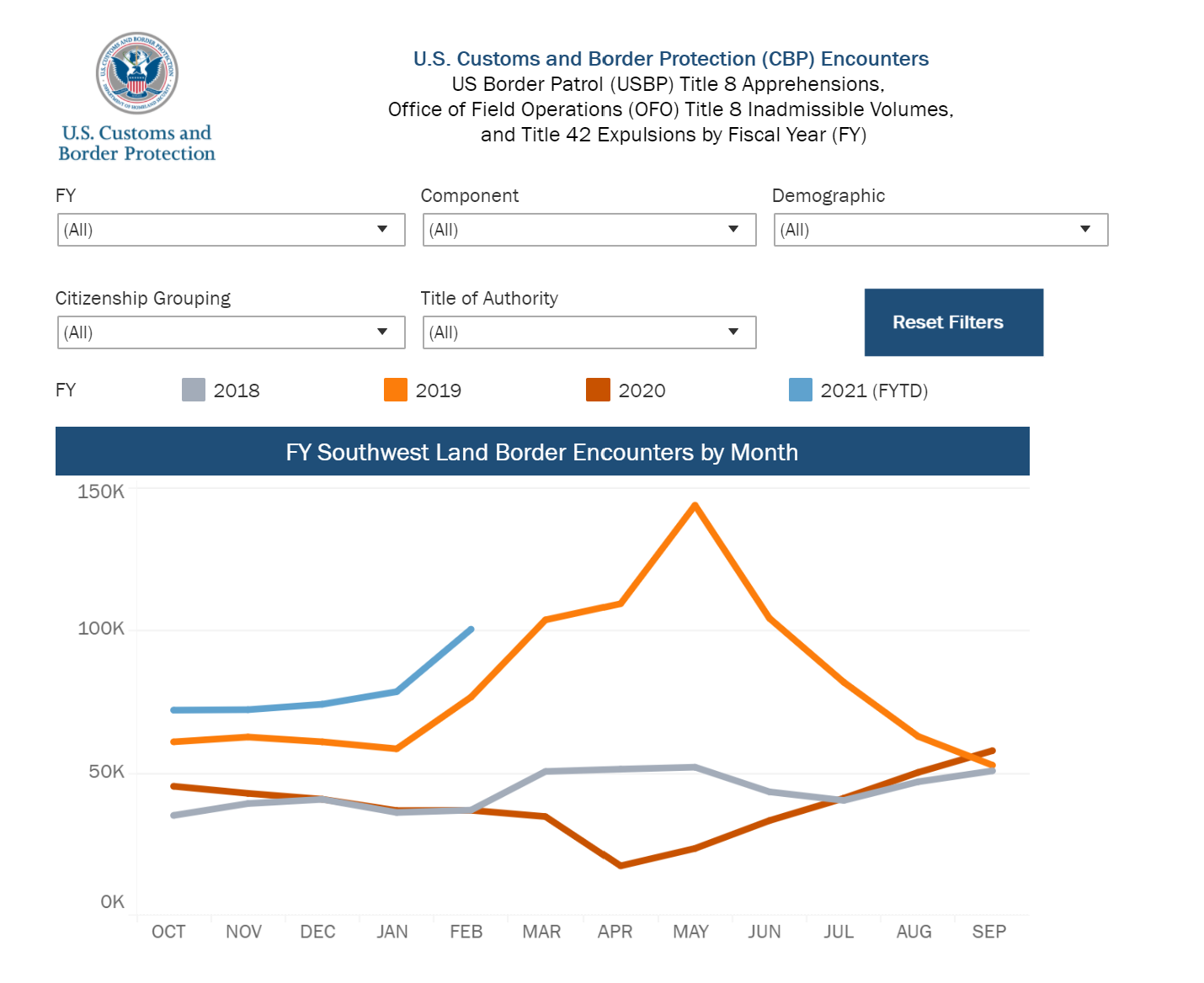 What’s the difference? The field office deals with people who showed up at an official port of entry in an attempt to legally enter and were turned away. Meanwhile, Border Patrol data includes people who attempted to enter the country without going through the legal process.

If you combine the two pools of data, the total number of encounters this February is 173% higher than it was last February. This is likely where Hudson’s figure comes from. The agency reported a total of 100,441 encounters in February, up from 36,687 last February.

However, to focus on "illegal border crossings," it’s more effective to omit field office encounters and focus on Border Patrol data. If we just look at encounters with Border Patrol, they triple from 30,077 last February to 96,974 this February. That’s an increase of 222%. 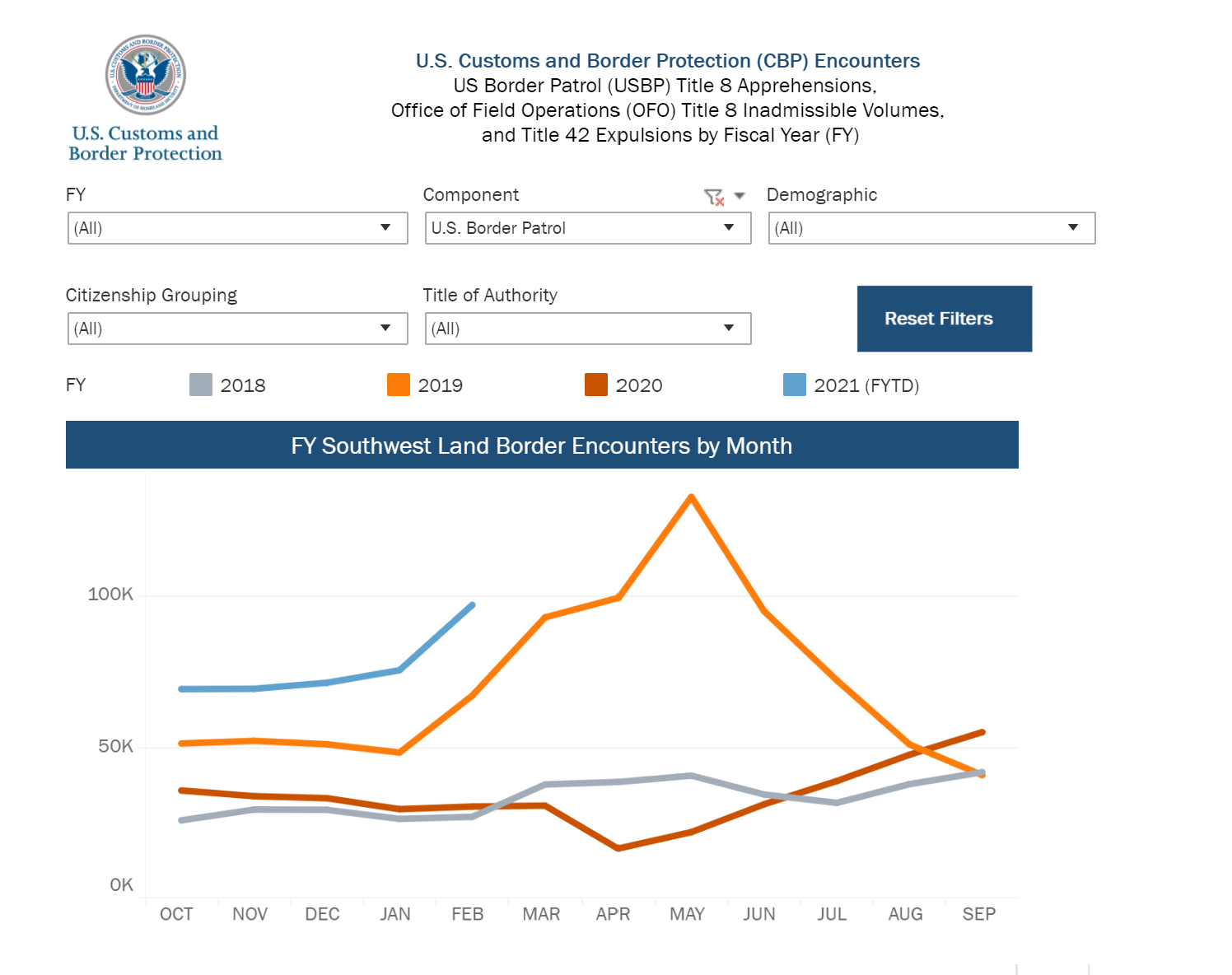 One thing to note is that the agency tracks crossings — not people, meaning some of the documented crossings could be from the same person. In fact, the agency estimated that between last March and this February 38% of all encounters involved recidivism, or individuals who have been apprehended more than once.

As for month-to-month numbers, encounters rose roughly 28% with or without field office data.

In summary, Hudson is right in that the rise in illegal crossings was likely 173% — at least. He looked at the wrong numbers but the miss doesn’t undermine his point.

Now let’s look at what Hudson claims is the reason for the rise. PolitiFact NC interviewed four experts who each said Hudson inaccurately described Biden’s policies and overlooked the myriad of reasons for the situation at the border, which PolitiFact wrote about earlier this month.

Does the wall have anything to do with the current problem at the border? Experts say no.

"The wall was not a factor at all," said David Bier, an immigration expert at the Cato Institute, a libertarian think tank. "It has no effect on whether people cross the border — only on where they cross."

"No more walls are being built right now. But it does not matter," said Tony Payan, director of the Center for the United States and Mexico at Rice University’s Baker Institute for Public Policy.

"The wall has no practicable effect on crossborder irregular migrant traffic or drug smuggling for that matter," Payan said.

It’s true that Biden has halted construction of the wall along the southern border. However, it’s wrong to suggest that further construction would have made a difference. As PolitiFact has previously reported, former President Donald Trump replaced roughly 200 miles of existing border fencing over four years but erected only a few miles of new border wall.

"It is not as if continued construction of border walls and fences would have hermetically sealed the border tomorrow," said Lynn Marcus, director of Arizona University’s Community Immigration Law Placement Clinic.

"New segments of the wall take years to build," said Nicole Hallett, director of the Immigrants’ Rights Clinic at the University of Chicago Law School. "The amount of wall that would have been built between January and now is negligible and would have practically no effect on how many people are crossing the border."

Now to the last part of Hudson’s tweet. Did Biden "stop" deportations? And is that part of the reason for the rise in border crossings? This is a gross mischaracterization.

When Biden took office, his administration ordered a 100-day pause on the deportation of people with final orders of removal. However, that pause didn’t apply to people who posed a threat to national security, who were convicted of a felony, or who were incarcerated at the time of the memo. And a federal judge later blocked Biden’s move.

Biden also started allowing some asylum-seekers back into the country. That rule-change is expected to affect 25,000 asylum cases, according to a PolitiFact story from mid-February.

In the meantime, federal law allows border officials to turn people away because of the public health emergency. This law is referred to as Title 42. Out of the roughly 96,000 migrants encountered by Border Patrol in February, more than 70,000 were turned away because of this rule.

Bottom line: Deportations have not stopped.

What about a supposed "catch and release" policy? Trump and other conservatives have used this term derogatorily over the years, sometimes referring to any rule that allows an immigrant to walk free. However, this Obama-era rule specifically allows asylum seekers to remain in the U.S. while awaiting court dates. (PolitiFact went over the rule in a recent fact check of the Texas governor.)

The Trump administration tried to ban "catch and release" in 2018. Biden lifted Trump's edict in early February, with the border patrol agency citing housing limitations as part of the reason why.

"Per longstanding practice, when long-term holding solutions aren’t possible, some migrants will be processed for removal, provided a Notice to Appear, and released into the U.S. to await a future immigration hearing," an agency spokesman told Yahoo News.

Experts dismissed the idea that "catch and release" has much to do with the rise in border crossings.

"Biden hasn’t changed catch and release policy in any meaningful way from Jan. 20," said Bier, the Cato expert. "More people are being released only because Mexico is refusing to take more than a certain number back. But he is removing far more and releasing far fewer migrants than Trump in the 2019 wave."

"No doubt, human smugglers take advantage of people's desperation by promising that, with the change in administrations, the U.S. will now welcome them with open arms," Marcus said. "While such messages may give hope to some who incur substantial debt to undertake the dangerous journey to the U.S. border, they are not the main reason people leave, nor are they based on fact."

The four experts who emailed with PolitiFact NC about the situation said there are multiple reasons for the rise in border crossings.

"The number of migrants are on the rise," said Payan, the Rice University expert. "But, interestingly, they are showing the same pattern — they rise in the spring and summer and fall in the fall and winter."

They have cited warming weather, political instability in immigrants’ home countries, hurricanes that hit Central America last year, and the economic fallout from the coronavirus pandemic. They also said Trump’s attempts to reject people seeking asylum, attempts that were challenged in the courts, created a logjam.

The U.S. Customs and Border Protection agency mentioned some of these causes in a Feb. 10 press release. A Washington Post analysis found that the rise in migrants at the border follows a seasonal pattern set in fiscal year 2019, with the addition of pent-up demand from people who stayed home in 2020 because of the pandemic.

Hallett, the expert at the University of Chicago, pointed out that border crossings still haven’t reached the level they were in spring 2019, when there were 100,000 crossings per month for four months straight.

"That would suggest that something independent of U.S. policy is at least partly responsible for the increase," she said.

Hudson said "Illegal border crossings are up 173% from 1 year ago and 28% since January when President Biden stopped the wall & deportations and started catch & release."

Hudson’s numbers are slightly off, but his point about illegal crossings rising nearly 200% is accurate. However, experts say the reasons for the rise in border crossings are complex and not fairly summarized by pinning the blame on border wall construction and Biden’s deportation policies. We rate this claim Half True.

Press release from the U.S. Customs and Border Protection agency on Feb. 10, 2021.

Story by the Associated Press, "Hundreds deported under Biden, including witness to massacre," posted Feb. 1, 2021.

Story by the New York Times, "Biden Faces Challenge From Surge of Migrants at the Border," posted March 8, 2021.