Ron DeSantis
stated on March 13, 2021 in in an interview on Fox News:
"When I became governor, we banned sanctuary cities and we also did E-Verify."

Florida Gov. Ron DeSantis speaks Tuesday, March 2, 2021 during his State of the State address at the Capitol in Tallahassee, Fla. (AP)

Gov. Ron DeSantis said while the Biden administration has created a crisis at the border, Florida lawmakers have taken action on their own to address illegal immigration.

"When I became governor, we banned sanctuary cities and we also did E-Verify," Florida’s Republican governor said on Fox News, adding that he hoped such policies spread nationwide.

"Biden is going in the absolute wrong direction," DeSantis said. "Trump had it right at the border, Biden has got it wrong."

DeSantis did sign laws to ban sanctuary cities and require some employers to use E-Verify, a federal program for employers to verify eligibility for employment. But he omits context about both bills.

There is no official definition or list of sanctuary cities, and some cities or counties have pushed back on that label. There also isn't any uniform sanctuary policy. Broadly, jurisdictions are described as sanctuary cities when they have policies that restrict state or local police from assisting federal immigration officers; stop local or state officials from inquiring into a person's immigration status; or restrict information sharing between local or state law enforcement and federal authorities.

Democrats have said that sanctuary cities don’t really exist, but that Republicans pretend they do to score political points. We found in 2018 that the fluidity of the definition plus legal challenges made it hard to determine if Florida had sanctuary cities or counties.

In 2019, DeSantis signed a law prohibiting a local government entity from having a sanctuary policy. The law required county jails to enter into agreements with a federal immigration agency and do their best to support federal immigration law. Supporters of the bill said it would improve public safety. Opponents said it was discriminatory and would erode trust between law enforcement and immigrant communities. 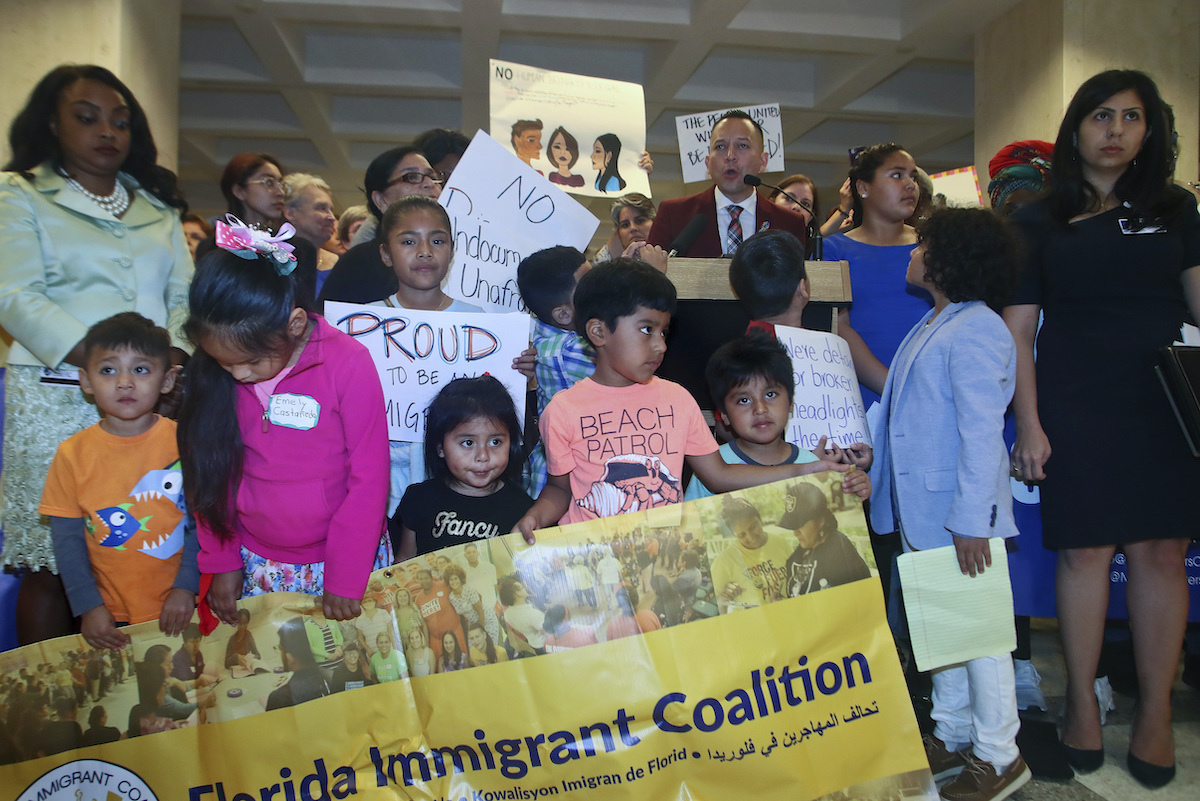 Immigration advocates protested SB 168, a sanctuary cities ban, on April 23, 2019, during a press conference in the Florida Capitol in Tallahassee, Fla. (AP)
The Southern Poverty Law Center sued DeSantis on behalf of immigration advocates and the city of South Miami. The case went to trial in January, and U.S. District Judge Beth Bloom has not announced her ruling, although in December she struck down a part of the law that allowed local law enforcement to transport immigration detainees outside their own jurisdictions.

A spokesperson for DeSantis said that the legislation has deterred cities from choosing not to enforce federal immigration laws.

A spokesperson for the Florida Sheriffs Association said that after SB 168 was signed into law, sheriffs updated their policies and entered into agreements with federal immigration officials, although some already had such agreements.

Before DeSantis signed the sanctuary cities ban, the Center for Immigration Studies, a think tank favoring low levels of immigration, listed Florida’s Alachua and Clay counties and the city of West Palm Beach as being sanctuary jurisdictions, but all denied the label at the time. Now, there are no Florida communities listed.

Both Alachua and Clay counties now have "basic ordering agreements" with ICE, as do most Florida counties. But Alachua’s sheriff spokesman Art Forgey said it was already the agency’s policy to give ICE access to inmates when in 2019 it signed a formal agreement to that effect in response to the new law. West Palm Beach reached an agreement with the Justice Department over its policies, and the city directed employees to share information with federal immigration officials.

DeSantis campaigned on a promise to enact E-Verify for employers.

E-Verify is a federal online program that allows enrolled employers to confirm the eligibility of their employees to work in the United States by matching information employees provide against Social Security and immigration records. Many states require the use of E-Verify for at least some employers.

After resistance from business groups, DeSantis signed a bill in June 2020 that required E-Verify for public employers and contractors, but gave private employers a choice: They could use E-Verify or complete federally required employment eligibility forms and retain copies of the supporting documents. Many businesses already chose to retain those supporting documents, such as a passport, green card, driver’s license or birth certificate. 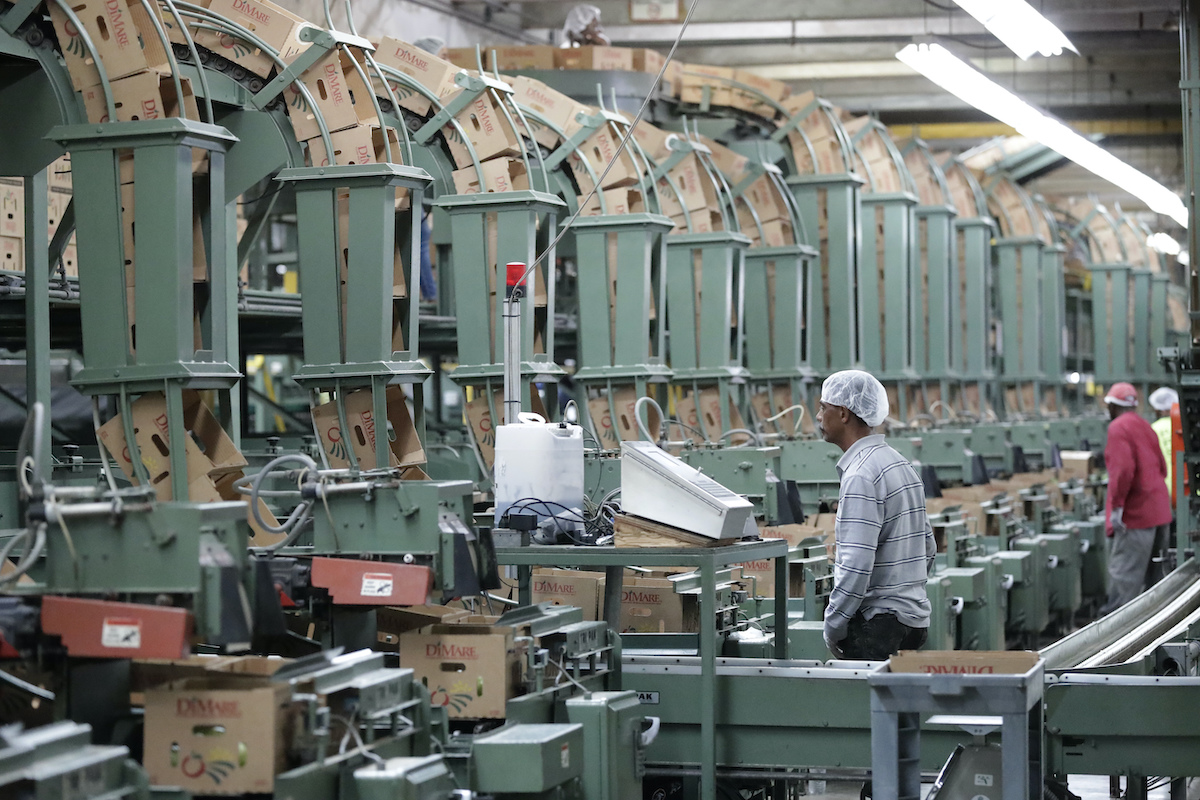 In this, Wednesday, Feb. 5, 2020 photo, workers monitor tomatoes as they are boxed, in Florida City, Fla. (AP)
The new state law expanded the E-Verify rules "a little bit more," said Enrique Gonzalez, a Miami lawyer and expert on immigration compliance for companies and institutions. But it’s nowhere near as stringent as states that mandate E-Verify for all employers, such as Arizona.

"We have not seen a substantial difference with implementation of this law compared to what (employers) were doing previously," Gonzalez said.

The Florida law required compliance by Jan. 1, 2021. There were about 66,000 Florida employers with E-Verify agreements as of Dec. 31, an increase from about 51,000 in 2019. But it’s unclear to what extent that relates to the new law or simply normal growth; there were about 41,000 in 2018. A bill introduced this session would mandate that all employers use E-Verify.

DeSantis said "when I became governor, we banned sanctuary cities and we also did E-Verify."

DeSantis did sign both bills, but omits context about both.

The bill he signed in 2019 banned local governments from having sanctuary policies. and required local jurisdictions to cooperate with federal immigration enforcement. But many jurisdictions already cooperated in such a manner before the law. The future of the law is uncertain due to a pending ruling from a federal judge regarding its legality.

In 2020, DeSantis did sign a bill to require E-Verify for public employers and their contractors, but in his comments, the governor omitted that it didn’t apply to private employers who could instead use federal forms used to verify eligibility for employment.

The statement is accurate but needs clarification or additional information. We rate it Mostly True.

PolitiFact, No sanctuary cities in Florida? That’s not as settled as Andrew Gillum claims, Feb. 18, 2018

Statement from the office of Gov. Ron DeSantis to PolitiFact, March 15, 2021

Marjorie Taylor Greene
stated on February 1, 2023 a House committee hearing:
Illinois “received $5.1 billion at an elementary school there that used it for equity and diversity.”