Xavier Becerra
stated on February 24, 2021 in statements at a confirmation hearing:
“I have never sued a nun — any nuns.”

Xavier Becerra testifies during a Senate Finance Committee hearing on his nomination to be secretary of health and human services on Feb. 24, 2021. (AP)

• As California attorney general, Xavier Becerra did not initiate a lawsuit against the Little Sisters of the Poor.

• However, the lawsuit he did initiate, which targeted the federal government, involved an issue on which the Little Sisters had long been a litigant. And after a court allowed the Little Sisters to intervene as a defendant in the case, Becerra continued to litigate directly against them in court.

Critics of Xavier Becerra, President Joe Biden’s pick to head the Department of Health and Human Services, seized on a comment he made while testifying before the Senate Finance Committee.

During the confirmation hearing, Sen. John Thune, R-S.D., asked Becerra, who previously served as California’s attorney general, about his past work on cases involving abortion.

"As attorney general, you spent an inordinate amount of time and effort suing pro-life organizations like Little Sisters of the Poor, or trying to ease restrictions or expand abortion," Thune said, adding, "I think the majority of the American people would not want their secretary of health and human services focused or fixated on expanding abortion when we’ve got all of these public health issues to deal with."

Becerra responded that he understands and respects that Americans have deeply held beliefs on abortion.

Becerra’s response drew fire from critics on the right, who pointed to years-long litigation between Becerra, representing the state of California, and the Little Sisters of the Poor, a Catholic order.

An official with the conservative Heritage Foundation tweeted, "Wow: Xavier Becerra falsely claims twice, 'I have never sued any nuns.' The Little Sisters of the Poor would like a word." The National Review was among those to call out Becerra’s claim. So did Sen. Tom Cotton, R-Ark.

🚨Xavier Becerra is now claiming he didn't sue nuns because he wants to get confirmed.

But Becerra did sue nuns. He repeatedly harassed the Little Sisters of the Poor.

That's why he should be rejected by the Senate. https://t.co/QOtHvENnLx

The reality is a bit murkier than either side would like to admit. Becerra didn’t "sue" the Little Sisters of the Poor, although as a representative of California, he was a plaintiff in long-running litigation against them.

The case in question involved not abortion, as Thune claimed, but rather religious rights as they related to the Affordable Care Act.

It was part of a series of lawsuits involving the law’s requirements that employer health plans offer free contraceptive coverage. In particular, the litigation revolved around whether sincerely held religious or moral objections to contraceptives would allow the employer to sidestep that requirement.

The Little Sisters of the Poor’s interest in this litigation didn’t come out of left field. During the Obama administration, the Little Sisters had sued to be exempted from the rule, even though it did not fit the strict definition of an exempted religious group under the ACA. The case was eventually consolidated with several related cases and argued at the Supreme Court in the case Zubik v. Burwell in 2016. Several members of the order were present for oral arguments. The court eventually sent several of the consolidated cases back to lower courts for further consideration. 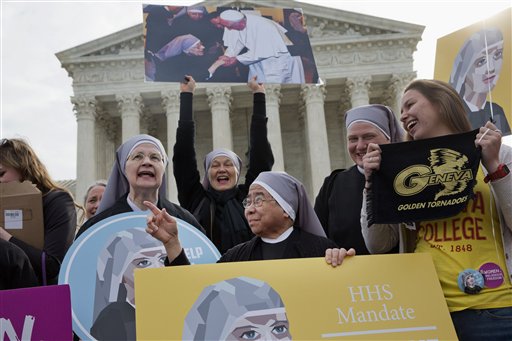 Sisters with the Little Sisters of The Poor, including Sister Celestine, left, and Sister Jeanne Veronique, center, rally outside the Supreme Court on March 23, 2016. (AP)

When the Trump administration broadened the religious exemptions in 2017, Becerra, as the top legal officer for California, challenged the new rule. Officially, the lawsuit was filed against the federal government, and the complaint did not specifically reference the Little Sisters of the Poor.

In a statement to PolitiFact, the California attorney general’s office said that in the lawsuit California vs. Azar, Becerra "sued the Trump administration to defend the Affordable Care Act’s contraceptive coverage mandate," citing two Trump-era rules that allowed employers to deny coverage. "By the Trump administration’s own assessment, these rules would have resulted in up to 130,000 women losing coverage."

As the case was working its way through the courts, the Becket Fund for Religious Liberty, a conservative legal group, petitioned the court in November 2017 to make the Little Sisters of the Poor a co-defendant in the case alongside the federal government.

About a month later, the court allowed the Little Sisters to join the case as a defendant, though it said the group didn’t have an absolute right to be part of it.

From this point on, documents related to the case referred to the state of California and several other states as "plaintiffs," HHS Secretary Alex Azar and other federal officials as "defendants," and the Little Sisters of the Poor and a few other allied groups as "defendant-intervenors."

The front page of one legal filing shows Becerra by name facing off against the Little Sisters of the Poor. 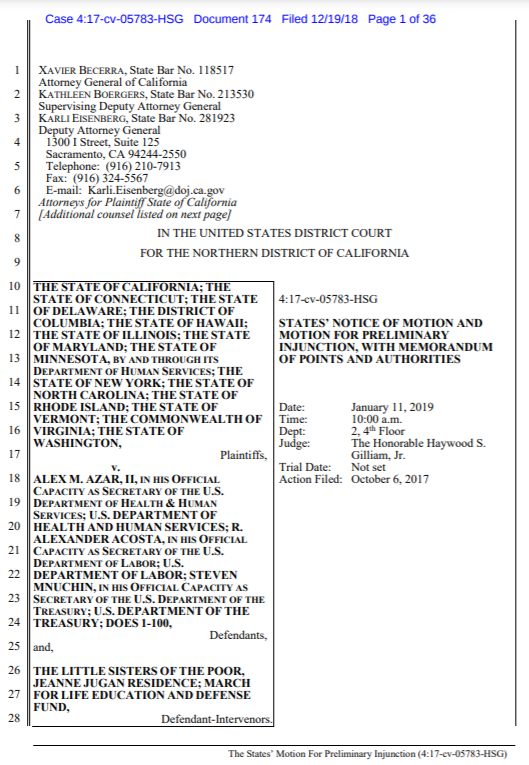 The case worked its way through the courts, and a related Pennsylvania case that involved the Little Sisters eventually reached the Supreme Court in 2020. The justices ruled 7-2 that the Trump rule changes were valid and sent the California case back to a lower court for further consideration, where it remains today.

The California attorney general’s office emphasized that Becerra only sued the federal government, not the Little Sisters of the Poor. The office argues that the Little Sisters’ involvement was thrust upon them by the court, not something the office sought out.

Merritt E. McAlister, a University of Florida law professor, said Becerra had a reasonable point about not having sued the Little Sisters.

Becerra "brought a suit that would affect their religious rights, in their view, but that suit was brought against the federal government, and the Little Sisters inserted themselves into the case, with the court’s permission, because they were interested in protecting their rights, even though the court said the federal government could more than adequately do that for them," she said.

But Ryan Colby, associate communications director at the Becket Fund, said this distinction is too cute.

"After the Sisters got into the case and he beat them in lower court, Becerra dragged them all the way to the Supreme Court where he lost 7-2," Colby said. "He's literally still fighting them in court today after that loss."

As some Twitter users have noted, the Little Sisters of the Poor aren’t technically "nuns." They’re "sisters."

"Nuns live a cloistered life in a monastery and live a contemplative lifestyle — a life of prayer," said Margaret McGuinness, a professor of religion and theology at La Salle University. "Sisters live and work in the world, although prayer is a very important component in their lives."

That said, McGuiness added that "in ordinary usage, sisters and nuns are used interchangeably."

Becerra said, "I have never sued a nun — any nuns."

U.S. District Court for the Northern District of California, ruling on motion to intervene, Dec. 29, 2017

State of California, "States' notice of motion and motion for preliminary injunction," Jan 11, 2019