Kelly Alexander
stated on March 11, 2020 in a tweet:
Says "most" NC legislators are in the "high risk age group" for coronavirus

To prevent the spread of coronavirus, one state lawmaker wants to take the "assembly" out of the North Carolina General Assembly.

North Carolina state Rep. Kelly Alexander, a Democrat from Mecklenburg County, suggested on Twitter that legislators should consider video conferencing. The start of the legislature’s session is scheduled for April 28.

Alexander posted his tweet on March 11. That same day the World Health Organization labeled the spread of the novel coronavirus as a "pandemic," prompting a wave of event cancellations and changes across the globe.

"With a vaccine a year in the future the General Assembly should use more teleconferences and fewer in person meetings to cut down on potential exposure...after all most of the GA’s members are in the high risk age group," Alexander tweeted, adding: "besides we need to modernize...just saying." 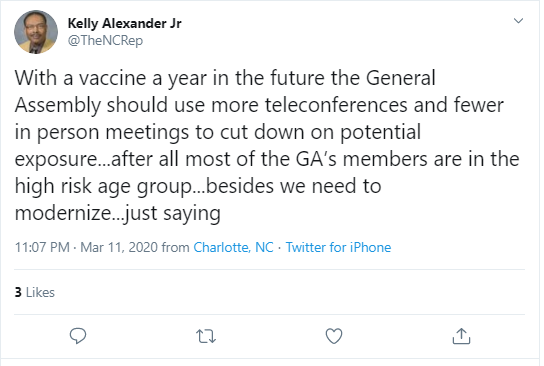 Is it true that "most" of North Carolina’s legislators are in the "high risk age group?"

Alexander never responded to an email from PolitiFact, so we don’t know how he came to his conclusion.

First, let’s first look at what health experts say about the novel coronavirus (also known as COVID-19) and who’s most at-risk.

The virus causes a fever, cough and shortness of breath in people anywhere from two to 14 days after exposure, according to the the Centers for Disease Control and Prevention. The CDC says people with chronic medical conditions such as heart disease, diabetes or lung disease are most at-risk.

As for age, there’s no specific birth date at which people become more vulnerable. Generally speaking: the older you are, the more likely you are to have complications from the novel coronavirus.

That said, top health organizations have defined "older adults" as people who are at least 60 years old.

The CDC has previously, in a document unrelated to the coronavirus, defined older adults as those over 60. The World Health Organization specifically mentioned people over 60 in its recent report on the coronavirus outbreak in China.

Health experts recently told CNN that the term "older" typically refers to anyone over 60. And US Surgeon General Jerome Adams said 60 is the "average age of people who need medical attention."

It also appears that people older than 60 are more susceptible to complications from the virus.

Scientific American reported that patients in China were more at-risk of death if they developed acute respiratory distress syndrome, known as ARDS, after contracting coronavirus. The average age of those who contracted the syndrome was 61.

So we know that people who are 60-years-old or older are likely to be more at-risk than other age groups. With this in mind, let’s look at the age of North Carolina’s legislators.

So it’s true that a majority of legislators are 60 or older.

How does that compare to Congress?

Those numbers come from a report by the Congressional Research Service and Jennifer Manning, the service’s senior research librarian.

Rep. Alexander said "most" North Carolina legislators are in the "highest risk age group" for coronavirus.

The highest risk age group is generally people who are aged 60 and older. Alexander’s claim is on-point: more than half of legislators are older than that. We rate his claim True.

U.S. Centers for Disease Control and Prevention: webpage on coronavirus (or covid-19) symptoms; webpage on the coronavirus situation summary (updated March 15, 2020); report on "Identifying vulnerable older adults and legal options for increasing their protection during all-hazards emergencies," which defined "older adults" as those aged 60 or older.

Story by Scientific American, "Which groups are most at risk from the coronavirus?" published March 3, 2020.

Report by the Congressional Research Service, "Membership of the 115th Congress: a profile," updated on Dec. 20, 2018.